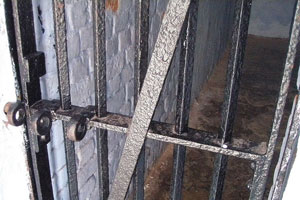 At the 680-bed Erie County Holding Facility, a small jail on the shores of Lake Erie in Buffalo, N.Y., six inmates have committed suicide in the past five years, as many as at Rikers Island, the sprawling New York City jail that typically houses about 14,000 inmates.

In 2007, an Erie inmate killed himself by diving off a 15-foot railing in full view of sheriff’s deputies. That same year, an inmate took his life after officials removed him from 24-hour suicide watch and put him with the other inmates. In 2008, two detainees used bed sheets to hang themselves from air vents, raising to 15 the number of inmates who had committed suicide this way, or tried to, since 2002.

County jails, most of them originally designed to hold low-level offenders, now serve, to some degree, as de facto psychiatric wards. Los Angeles County Sheriff Lee Baca famously referred to the jails he oversees as “the largest mental health institution in the country.”

While large jail systems have made substantial inroads in safeguarding mentally ill inmates, sharply reducing suicide rates since the early 1980s, some smaller jails—hobbled by poor layouts, thin staffing and inadequate training—are struggling to meet the most basic requirements set by federal law.

Their shortcomings can take a deadly toll. Suicides account for more than two of five deaths at smaller jails, versus fewer than one of five in the country’s 50 largest jails, Bureau of Justice Statistics show. Despite improvements in prevention techniques, inmates at smaller jails remain twice as likely as those at larger jails to die by their own hand. Detainees at the Erie facility kill themselves at a rate five times the national average.

“It is difficult for these small jails when they are competing with resources that go to free society,” said Christine Tartaro, an associate professor of criminal justice at Richard Stockton College in New Jersey and co-author of the 2009 book Suicide and Self-Harm in Prisons and Jails.

The Justice Department began its investigation into problems at the Erie County jail in 2007, but local officials denied its experts unfettered access to the facility and failed to make improvements voluntarily, court records show. Stymied, the department sued the county last September, alleging it had an “inability to supervise inmates, identify inmates at risk for suicide, correct deficiencies in cells that facilitate suicide attempts, and prevent likely suicide attempts.”

Erie County officials did not return phone calls from ProPublica about the case. County Attorney Cheryl Green has asserted in court documents that the jail meets constitutional requirements and that inmates cannot expect “the amenities, conveniences and services of a good hotel.”

A federal judge recently ordered the county to allow Justice Department experts into the jail, partly because three inmates have committed suicide there since oral arguments began in the case in December. Officials from the agency toured the facility last week.

Unlike prisons, which house offenders who have been sentenced, jails hold mostly pretrial detainees—people who have not yet been convicted.

New inmates may be detoxing from alcohol or street drugs. They often arrive without medical records and whatever prescription medications they are taking. Some may be upset following confrontations with police. Things can turn bad in a hurry: A census of jail suicides between 2000 and 2002 found almost a quarter of the deaths happened within 48 hours of admission, and nearly half occurred in the first week of custody.

A proper intake screening is critical, experts say. “You can pick up the signs and when there is a problem, you do a mental health study and then you take the precautions that are necessary,” said Fred Cohen, an Arizona attorney who is an expert in correctional law and a federal court monitor for Ohio’s juvenile detention centers. “Most of the signs and symptoms of the likelihood of suicide are either ignored or the guys don’t know.”

In Erie County, a 2008 report by the National Commission on Correctional Health Care found that the intake screenings were inadequate and that there was no documentation proving that the correctional officers performing them had been trained. They collected medical information, but often failed to record it properly: “The receiving screening information is not filed in the health record in almost 40 percent of the patient records reviewed,” the commission reported.

Some smaller jails, especially older ones, lack the design features and equipment to monitor inmates identified as having suicidal tendencies. At more modern jails, that means glass-walled cells allowing for continuous observation, and Velcro smocks and tear-proof blankets that can’t be torn up and turned into nooses.

Cells at the Erie County facility, by contrast, provided inmates with “multiple ways to facilitate committing suicide,” according to the national commission’s assessment. The jail’s old-fashioned steel beds, window bars, grab bars and removable wall plates could be used by inmates to harm themselves.

In 2003, Erie County eliminated several health care positions at the jail, including the head nurse and almost half of the mental health staff. The next year, the holding center began admitting inmates who had been held in the Buffalo Police Department’s lockup, further straining the staff.

“Medical staff report that they are not always able to take vital signs, feel rushed and experience burnout,” the national commission’s report found. “The facility does not have a chronic care program; treatment plans are not developed even for inmates with serious mental illness; and progress notes are often not entered in the medical record.”

In Erie County and elsewhere, those monitoring jail inmates are typically sheriff’s deputies with limited training in recognizing the signs of mental illness – most of their training prepares them to be street cops.

“The sheriff’s office has two very different sets of responsibilities,” says David Fathi, director of the ACLU’s National Prison Project, who has litigated several constitutional claims against jails and prisons. “One is to be law enforcement patrol officers to the free world and one is to be correctional officers. … Often there is a preference among the deputies for patrol duty. To the extent that correctional work is thought of as a less desirable job function, it often gets short shrift in terms of training and resources. … My anecdotal experience it that seems to be more often a problem in smaller jails.”

The Erie County sheriff’s deputies who work in the jail get just eight hours of training in suicide prevention screening, court documents show.

With six suicides since 2005 and many more attempts, the Erie County jail may yet emerge as a battleground for determining the minimum quality of care to which jail inmates are entitled.

It is facing heightened scrutiny from state regulators as well as the Justice Department. Earlier this month, the chairman of the New York State Commission of Correction, Thomas Beilein, ordered a comprehensive review of the facility’s suicide screening program and sent two investigators to inspect the jail. Erie County Sheriff Timothy Howard cooperated with that inspection.

Howard and other Erie officials continue to battle the Justice Department, however, maintaining that federal overseers have overreached in their demands. With the long-sought tour complete, DOJ lawyers say they will soon return to court to force the county’s hand.

“If our lawsuit is successful, the Department would ask the Court to remedy unconstitutional conditions at the Holding Center to ensure that the jail is safe and humane,” a DOJ spokesperson said in an e-mail. “We are not seeking fines or monetary penalties, or remedies beyond the basic standards of care guaranteed by the Constitution.”