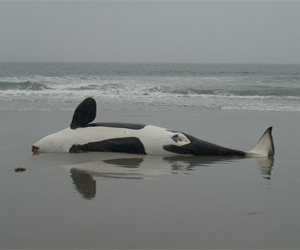 Last week, Americans confronted a range of emotions on learning that Tillikum, a killer whale at Sea World in Orlando, seized its trainer in the middle of a live show and killed her in a violent underwater frenzy. Dawn Brancheau, 40, died doing what she loved: communing with animals who are awe-inspiring and, by nature, dangerously unpredictable. While postmortems and new precautions are understandable, decorum and a sense of compassion for the deceased would dictate that we refrain from misplaced rage and abject stupidity.

But not if you’re the American Family Association, which in its faux-Christian zeal seems to have swapped out the Gospel’s teachings of love, patience, and charity for old-school righteous fury. Bryan Fischer, the AFA’s recently appointed “director of issue analysis for government and public policy,” wrote a post on the organization’s blog today titled “Bible ignored, trainer dies.” In it, he called for the stoning death of Tillikum in alleged accordance with scriptural law, since he had killed before:

If the counsel of the Judeo-Christian tradition had been followed, Tillikum would have been put out of everyone’s misery back in 1991 and would not have had the opportunity to claim two more human lives.

Says the ancient civil code of Israel, “When an ox gores a man or woman to death, the ox shall be stoned, and its flesh shall not be eaten, but the owner shall not be liable.” (Exodus 21:28)

But then Fischer went a step farther: If this were the old days, he wrote, Sea World curator Chuck Thompson would be stoned to death, too:

…the Scripture soberly warns, if one of your animals kills a second time because you didn’t kill it after it claimed its first human victim, this time you die right along with your animal. To use the example from Exodus, if your ox kills a second time, “the ox shall be stoned, and its owner also shall be put to death.” (Exodus 21:29)

Fischer—who moved to the AFA last year from the Idaho Values Alliance, and who is ironically dubbed a “friend of life” on his AFA bio—has never been the smartest parishioner in the pew, whether it’s arguing that gay judges can’t be fair or that the US military should ban Muslims.

But this is a new low, one that the AFA should probably distance itself from pretty quickly. The organization states one of its goals as “promoting the Christian ethic of decency.” As a Christian—a subscriber to a rather rigorous and considered scriptural tradition—I find nothing decent in Bryan Fischer’s tirade. Except that his position on killing animals fits pretty decently with this faux-faith organization’s position on killing convicts, too.