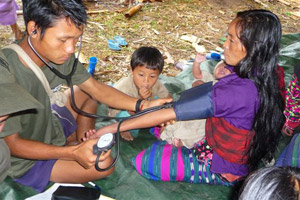 “Mordor is the SPDC [Burmese government], and guys like us are hobbits,” Tha U Wa A Pa says by way of explaining why he built a training base for medics in a land-mine-infested war zone in Burma, where he lives with his wife and three children.

Tha U Wa A Pa and his Free Burma Rangers document the atrocities of the Burmese army and provide medical and tactical help to those fleeing from it. It’s a quest requiring almost inconceivable bravery and, in Tha U Wa A Pa’s case, a conviction that God has chosen him for this task. Though he uses a Karen nom de guerre (meaning “Father of the White Monkey”—a.k.a. his daughter), he’s the son of prominent American missionaries in Thailand, an alum of Texas A&M (BA, poli-sci) and a former US Army Ranger. After graduating from Fuller Seminary in Pasadena, Tha U Wa A Pa became a missionary in Thailand himself. Which is where he was in 1997, when a major SPDC offensive sent a flood of Karen refugees across the border. Tha U Wa A Pa loaded up a backpack full of supplies and, together with a KNU soldier he met along the way, rushed into Burma as if it were a house on fire. The two men treated as many wounded as they could, carrying a guy who’d stepped on a land mine to a hospital to have his leg amputated. Over the next three weeks, they ferried supplies and patients back and forth over the border.

Since then, the Rangers have trained more than 110 roving teams who provide medical assistance to (and document the plight of) the more than half a million internally displaced persons in the eastern Burmese jungle. Rangers have treated some 400,000 people for malaria, AIDS, dysentery, diarrhea, malnutrition, worms, anemia, skin disease, and infections. They pull teeth and deliver babies. Six have lost their lives on the job. As the junta’s violence escalates, so do their efforts; the Rangers’ budget is up to $1.3 million a year, all donations, mostly from churches and their parishioners. “We’re just little guys trying to do some good,” Tha U Wa A Pa says. “On the surface it seems like Mordor has all the strength and power and might. But if our fellowship of hobbits stays united, good will defeat evil in the end.”

In 2006, MoJo human rights reporter Mac McClelland found herself living in Thailand with activists engaged in battling Burma’s dictatorship. What she didn’t know at the time: Those activists were associates of a US-designated terrorist organization. To read an article about Mac’s adventures with the activists/terrorists, click here. To see a slideshow of Burma’s dirtiest exports, click here.