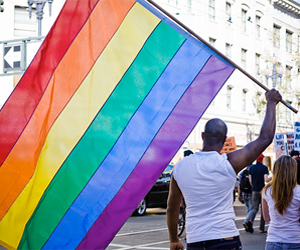 Judging from the Family Research Council’s official bio of its vice president Tom McClusky, you’d think the guy was a pretty mild-mannered, if conservative, politico. He’s worked for Bush the Elder, Jack Kemp, and George Allen, among others—not your typical Tea Party rabble—and he’s written lots of anti-tax policy papers. He appears like the sort of staid, quiet guy who’d say something like this to Fox News: “It seems like for only six months, every two years—right around election time—that we’re even noticed.“

Fortunately for the good-humored progressive, McClusky fills that down time with highly entertaining ramble on a blog for the right-wing, “family values”-oriented FRC. It’s called the Cloakroom—not to be confused with a closet, for it is here that McClusky details the evils of homosexuality…as well as women’s rights, homeland security (when it’s Democratic-run), and the like. And few of his Cloakroom rambles are as fun as the one he posted yesterday calling Barack Obama gay. The First Gay, in fact. Wrote McClusky:

…if it was argued during his two terms in office that Bill Clinton was “our first black President” because of his supposed liberal policies that would benefit African-Americans (though I’m not quite sure what President Clinton did, that he wasn’t forced to do, that would benefit any minority except for Chinese monks with political donations to spend.) With that argument shouldn’t Barack Obama already be our “first gay President” due to his liberal policies pushing the homosexual agenda?

As evidence that Obama is, ahem, in the pocket of the “homoesexual lobby,” McClusky cites these: His fight to end DADT, his attempts to “chip away” at straight marriage, his signing of anti-hate-crime legislation, and his championing of an Employment Non-Discrimination Act that affords “special protections for homosexuals, transgendered and transvestites.”

Now, McClusky’s said some fun stuff in the past…like when he said he understood why Wiccans, Marxists, communists, and socialists supported Obama, but couldn’t understand some pro-lifers’ support for him. Or when he insisted that the Obama administration’s Department of Homeland Security was tracking him as a terrorist. Or when he flat-out dirty, dirty lied about “rationing” of care under the Obama-approved health care reform bill, then explained that he wouldn’t mind if it was private industry shafting the sick—it’s “more troubling when the federal government is doing it.“

But calling Obama “the first gay president” isn’t just silly in that “Hey, look at me! I’m a right-wing Astroturfer trying to get some free publicity!” way. Based on our best historical and probabilistic evidence, he’s likely very wrong to call Obama the “first” gay prez. James Buchanan, the only bachelor president, has long been suspected of an extended relationship with his roommate and confidant, the Alabama Democratic Senator Willam Rufus King. Also, since 4.1 percent of the US population, 18 to 45, identifies as gay according to UCLA’s Williams Institute, it’s safe to bet that at least one or two presidents have actually been gay men.

And in an impressive feat of doublethink, McClusky’s entre in to this world of gayness is to cite—then conveniently ignore—a 60 Minutes/Vanity Fair poll that shows well over half of the US population would be fine with a gay or lesbian chief executive. In other words, Obama’s here, and if he’s queer, Americans are used to it.

But I’d be addled, too, were I McClusky, watching an entire nation pass me by. It must be hard for a right-wing retrogressive to witness Obama’s stand for queer rights, then realize that rhetoric aside, he’s likely not the first gay president—or the last one, either.