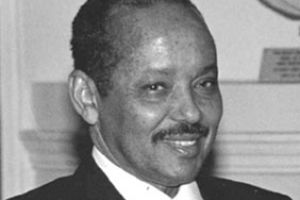 For Bashe Abdi Yousuf, Aziz Mohamed Deria, and three other plaintiffs who suffered under the brutal reign of Somalia’s late dictator Mohammed Siad Barre, today is a make or break moment. This morning the Supreme Court is hearing the case of the highest-ranking member of the Siad Barre regime who’s still living, Mohamed Ali Samantar, who served as the country’s defense minister and later prime minister during a dark era in which a range of human rights abuses were inflicted on the populace. But the high court won’t be weighing in on whether the 74-year-old official, who has been living outside of Washington, DC for more than a decade, is the war criminal his accusers say he his. It will render an opinion on whether he—and, by extension, other foreign officials accused of similar abuses—can be sued at all in US courts. When I reported on the case a couple weeks ago, I noted that Samantar, who claims he’s immune from suit under a statute known as the Foreign Sovereign Immunities Act, has drawn an odd coalition of defenders.

Among them were the government of Saudi Arabia, various pro-Israel groups, and three former US attorneys general. At stake is whether foreign officials can be sued in US courts for human rights abuses, or whether they are protected by a swath of immunity that shields them from answering for even the most heinous acts. Supporters of Samantar’s position contend that if the Supreme Court rules against him, it could leave officials from Saudi Arabia, Israel, the US, and elsewhere vulnerable to an avalanche of lawsuits. And the case raises major foreign policy questions, particularly as the Obama administration wages an aggressive fight against terrorism around the world.

Yet, if the court agrees with Samantar’s interpretation of the FSIA—and it’s important to note that his reading of the law is at odds with the views of both the Bush and Obama administrations—that would effectively gut the Torture Victim Protection Act. The 1991 law, championed by Sen. Arlen Specter (D-Pa.) and others, allows torture survivors to seek legal redress against their victimizers in American courts. Part of the irony here is that this law came into being partially as a result of the gross human rights violations carried out by Siad Barre’s regime.

The Washington Post ran a story on the case yesterday, based on a elusive interview with Samantar. For the most part, the story paints a fairly sympathetic portrait of the grandfatherly man who J. Peter Pham, an expert on Somalia’s history, described to me as “the dictator’s enforcer.”

Samantar says the claims of his accusers—who collectively say they or their family members were subjected to torture, rape, extrajuducial killings, and other horrors—are “baseless allegations, with no foundation in truth.” He added, “I served the people rightly and justly. I always respected the rule of law. I am no monster.” Perhaps not. But he’s made clear, just the same, that he’d rather not take the chance on whether a judge and jury will agree.