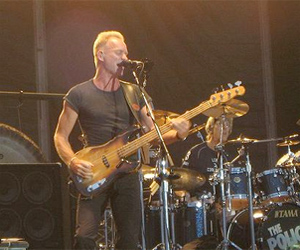 I’m not going to pretend pop-music fame is easy, but here’s a handy maxim for future crooners to keep in mind: Don’t do private concerts for tyrannical rulers who reportedly boil people alive. Just sayin’.

You might think it goes without saying. But then, you might not be Sting. The former Police frontman, whose given name is the less-barbed Gordon Matthew Sumner, has been taking it on the nose for performing last October at an “arts festival” put on by the daughter of Uzbekistan’s strongarm dictator, Islam Karimov. (He’s the former communist party boss who, since 1991, keeps getting “elected” as his political opponents or their bodies keep disappearing.) Tickets to the gig in Tashkent, Uzbekistan’s capital, ran from $1,000 to $2,000—or 45 times the average Uzbek’s monthly income. And having been there, I’d say that might just be an overestimate of the average Uzbek’s earning power.

If you want to know just how bad Karimov’s regime is, ask Britain’s former ambassador to the nation, Craig Murray. Or the thousands of children Uzbekistan puts to work in its cotton fields to pick and bale its “white gold.” Or Condoleezza Rice, who tore asunder a tenuous US-Uzbek anti-terror alliance after Karimov’s men gunned down as many as 1,000 demonstrators in the streets of Andijon five years ago. (When the Bush-era State Department calls your country “an authoritarian state with limited civil rights” and castigates you for allegedly torturing and killing terror suspects “by immersion in boiling water,” brother, you’re on the wrong side of a moral argument.)

The daughter in question, Gulnara Karimova, is a piece of work in her own right. Just ask her ex-husband, an Afghan-American from New Jersey, whose two children—and Coca-Cola bottling-plant fortune—were allegedly spirited off to Uzbekistan when the couple separated. She also reportedly runs several state-owned business concerns cobbled together from Western assets seized in Uzbekistan, which are occasionally backed by shadowy military contractors who might be involved in assassinations. She’s also listed as one of the 10 richest women in Switzerland. Let that sink in for a minute. Rich. By SWITZERLAND standards.

For his part, Sting (who has been a big past booster of Amnesty International) said in a statement that he has no illusions about the Karimov regime. “The concert was organized by the president’s daughter and I believe sponsored by UNICEF,” he said. “I am well aware of the Uzbek president’s appalling reputation in the field of human rights as well as the environment. I made the decision to play there in spite of that. I have come to believe that cultural boycotts are not only pointless gestures, they are counter-productive, where proscribed states are further robbed of the open commerce of ideas and art and as a result become even more closed, paranoid and insular.” (UNICEF said today it was “surprised” by the notion it had cosponsored any events in Uzbekistan.)

You’re appalled, right? Or perhaps you’re thinking: I’d book a really cool band for my private party like those guys, if only I could afford it. Judging from their marketing website, you might be able to afford Guns N’ Roses. But if you’re not a bloodthirsty dictator with torture-and-assassination squads at your command, good luck making sure they show up.