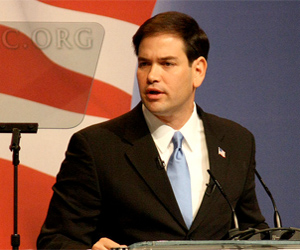 Fiscal responsiblity. Yes sir, that’s what it’s all about these days. Along with iPods, plasma high-def televisions, and Snuggies, talking about fiscal responsibility has become a staple of American life (but irony, sadly, not so much). It’s not just for Tea Partying, gun-toting conservatives or obstructionist congressional Republicans, but “moderate” Democrats, too—and of course, so-called “independent” voters who have never voted for anyone to the left of Ted Nugent. Health care? Unemployment? Why are we talking about spending more money that we ain’t got? That’s not how everyday people operate their budgets, we’re told, and it shouldn’t be how the government operates, either. (Except if the government is run by a Reagan or a Bush, in which case: Spend away).

Nobody’s been a bigger beneficiary of all this belt-tightening, balanced-budget posturing than Marco Rubio, the frontrunner for Florida’s open Senate seat. The Republican speaker of the state House has styled himself as a Tea Party-friendly, arch-conservative alternative to moderate GOP Gov. Charlie Crist (a maverick who’s been burdened with the task of actually governing and managing a budget. And who also has committed the unpardonable sin of being civil to President Obama.) Rubio’s red meat has been government waste: His campaign call is for “limited government and opposition to the Crist-Obama agenda of tax, borrow and spend.”

Except Rubio loves to borrow and spend—and if you’ve ever given to a GOP-connected cause, you’ve probably helped him. The Miami Herald recently broke the news that in 2007 and 2008—the prime recession years, when all our 401(K)’s evaporated—Rubio charged $109,618 to an American Express card opened by the Republican Party of Florida. That included a $133.75 haircut at Churchill’s—a high-flying barbershop in his hometown of Miami (insert John Edwards comparison joke here), and $4000 to fix his busted family minivan. Rubio paid the GOP back for what he deemed “personal” expenses on the account, letting the unpaid balance—all $93,566 of it—ride on the card. The state party eventually paid that tab, which included Rubio’s broken-car fees.

In fact, this is part of a larger media investigation into the Florida GOP’s free-spending ways. Just-deposed state Republican Chairman Jim Greer liked private jets and “lobster dinners,” both of which apparently put him in a good state of mind to rail against “unnecessary pork barrel spending” by Democrats.

So Rubio’s not the only big spender in the Florida Republican Party. But he’s one of the most hypocritical, since he made Crist’s acceptance of federal stimulus money the focal point of his political offensive. In a page straight out of the Tea Party playbook, Rubio has said that Obama’s and Crist’s spending policies “will rob my children and their generation of their prosperity, and some of their freedoms.”

Thank God! At least we now know that, if the worst happens, Rubio’s children will be reimbursed by Amex and the Grand Old Party. Until, of course, Obama’s socialist regime bans credit cards.