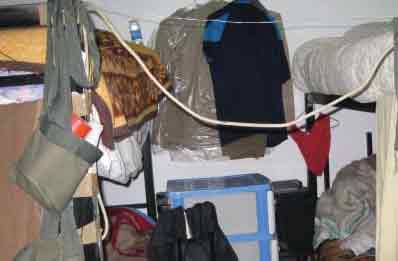 Photo of Triple Canopy guard quarters courtesy of the office of the State Department's IG.

Surely last September’s scandal involving the bacchanalian hijinks of ArmorGroup’s vodka-butt-shot-taking guards taught the State Department—and specifically its diplomatic security division—a major lesson about the perils of loose oversight, right? Perhaps not, according to a recent review of Triple Canopy’s $438 million contract to guard the US embassy in Baghdad conducted by the State Department’s Inspector General.

No, Triple Canopy personnel were not spending their off duty hours gallivanting around with coconut bikinis covering their privates and subjecting each other to lewd hazing rituals. But the IG’s report [PDF], dated March 10 and first obtained by the Project on Government Oversight, does raise the question of whether anyone might have been the wiser if they had been. Among other areas where oversight was MIA, the IG’s office reported that the “Embassy is not properly overseeing” Camp Olympia, where Triple Canopy’s guards reside.

When investigators visited the guards living quarters they found “unsafe” and squalid conditions —one of multiple areas where the company was found to have violated the terms of its contract:

The inspection revealed that guards’ housing exceeded occupancy limits with over four times the acceptable number of guards residing in a room…Rooms lacked required fire alarms, smoke detectors, sprinkler systems, and fire extinguishers. The rooms also had live, frayed electrical wires in high traffic areas. The inspection revealed combustible material near air conditioners. After the inspection, the embassy deputy facilities manager stated that Camp Olympia was unsafe and “if there was a fire in the dorms, some people will not get out.”

According to the IG’s report: “Presently, no entity — Embassy Baghdad, Triple Canopy, or DS — is overseeing safety conditions at Camp Olympia, although all three parties are required to do so.”

The investigation was prompted by concerns over whether Triple Canopy’s guards, the majority of them so-called third country nationals from Peru and Uganda, met training requirements. But the IG reported that Triple Canopy’s disorganized and spotty record-keeping practices made “it difficult to verify whether guards have received required training.” Additionally, the contracting officer overseeing Triple Canopy’s work “does not enforce contractually required standards for guards’ English language proficiency. Due to their low levels of proficiency, some guard supervisors are unable to adequately communicate with their subordinates, which could lead to serious problems during an emergency.” Nor, according to the IG’s investigation, does this officer “verify either the guards’ attendance at their posts or the accuracy of personnel rosters (muster sheets) before they are submitted, to ensure contractor charges for labor are accurate.” Collectively, these problems echo those that jeopardized the safety of the Kabul embassy—though the IG’s report is careful to note that Triple Canopy “has met the security goals of the contract.”

A footnote buried in the report suggests that Triple Canopy officials may have tried to impede State Department investigators from getting the full story. Prior to a site visit by IG investigators, according to the report, Triple Canopy’s Iraq program manager, deputy program manager, and guard force commander coached the company’s guards on how they should respond to questions about working conditions and other matters. They circulated a memo containing “Pre-Inspection Guidance” that warned the guards about saying too much and contained what appears to be a thinly veiled threat:

Answer to break question for guards is 15 minutes morning, 30 minutes lunch, and 15 minutes afternoon. DO NOT SAY: “I do not have a relief supervisor today.” Instead, and only if asked, I am sharing a relief supervisor with (name other venue). Do not elaborate on answers to inspectors questions. Answer only the questions. What you say can and will be used against you.

Unsurprisingly, the majority of the guards the IG’s office interviewed said they received their breaks as required—but four members of Triple Canopy’s embassy team acknowledged this wasn’t always the case. Moreover, investigators found the guards labored under harsh conditions, some of them working as many as 39 days consecutively. “This practice diminishes guard alertness and undermines site security,” the IG reported. It also added: “Several guards complained they become ill from working consecutive days in the Baghdad heat with daytime temperatures averaging over 110 degrees Fahrenheit and sand storms that can last for days.”

“How could State not have learned their lesson after the public flogging they got for their handling of the Kabul contract?” asked POGO Executive Director Danielle Brian. “This report again raises an important point about whether State can properly manage Embassy security contracts in a war zone.”