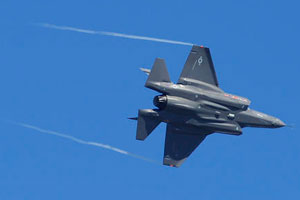 When was the last time you saw the headline, “Cost of [Pentagon-weapons-system-of-your-choice] halved”?  Probably never.  Still, the thought came to mind when this recent Associated Press headline caught my eye: “Pentagon: F-35 fighter jet cost doubles.”

Here’s the story behind it:  Since 2001, when an F-35 Joint Strike Fighter was expected to cost an already hefty $50 million, the plane’s cost has soared into the stratosphere (despite the fact that the aircraft itself has barely left the ground).  The estimated cost today is $113 million per plane.  Yes, that’s per plane.  This supposed future workhorse of the US military is now priced like the planet’s most precious gem.  It’s also 2 ½ years behind schedule.  Keep in mind that the Marines, the Air Force, and the Navy are planning to buy a combined 2,450 of them for what’s now an eye-popping $323 billion.  And if you think the costs are likely to stay in the $113 million range, given the history of Pentagon cost overruns, then I have a nice little national security bridge to Brooklyn I think the US public might love.

In other words, if all goes well from here (an unlikely possibility), a single future weapons system is now estimated to cost the American taxpayer almost one-third of what the Obama administration’s health-care plan is expected to cost over a decade.  You could even think of the Pentagon’s weapons procurement process as the health-care system of the national security state.  Its costs just never stop rising.  In fact, the Government Accountability Office pegs major weapons systems cost overruns since 2001 at $295 billion, another near third of the cost of the health-care bill supposedly coming to a vote this week.

And here’s what’s remarkable:  You barely hear about such overruns.  They’re almost never front-page headline news, even though the money’s being taken from not-so-deep taxpayer pockets.  And when truly terrible news, as with the F-35, comes in, all that happens in Washington is that a few politicians mutter a little.  John McCain, for example, offered this less than stirring quote on the F-35: “The taxpayers are a little tired of this. I can’t say that I can blame them”; and an irritated Senator Carl Levin, chairman of the Senate Armed Services Committee, said: “We cannot sacrifice other important acquisitions in the DOD [Department of Defense] investment portfolio to pay for this capability.”  (Bet you didn’t even know that future weapons were part of a Pentagon “investment portfolio.”)  In the case of Secretary of Defense Robert Gates, he’s planning to hold back $614 million in “performance bonuses” from the plane’s lead contractor Lockheed Martin.  (And you thought only bankers and financial wheeler-dealers got performance bonuses!)  But it’s striking that there are no tea party movements out in the streets of America demanding our money back or claiming that we’re going to be broken by this.

Here’s an American reality: the Pentagon is our true welfare state, the weapons makers our real “welfare queens,” and we never stop shoveling money their way.  Somebody should raise a few tough questions about the Pentagonization of our country and its finances.  Fortunately, TomDispatch has retired Lt. Col. William Astore to take on the task.