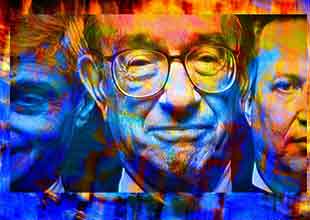 Alan Greenspan, the economic sage and former chair of the Federal Reserve, has been on a mission to set the record straight on the financial crisis—not least his own role in it. In March, the Brookings Institution published a detailed, 66-page paper (pdf) he authored on the crisis’ origins. Most recently, he used a three-hour hearing on Wednesday by the congressionally-chartered Financial Crisis Inquiry Commission (FCIC) to discuss how subprime mortgages and securitization fueled the meltdown. Except Greenspan hasn’t been describing recent history so much as rewriting it.

Greenspan, who chaired the Fed from 1987 to 2006, has received plenty of blame and opprobrium for the central bank’s role in the subprime meltdown and broader economic crisis. The Fed, critics say, failed to rein in abusive practices by subprime lenders by choosing not to flex its regulatory muscle. For a time, it let credit card companies off the hook with a 2004 ruling that overdraft fees weren’t loans, and thus not subject to fair lending law. Consumer advocates also say Greenspan’s policy of keeping interest rates low during the 2000s paved the way for the housing bubble.

But reading Greenspan’s testimony before the FCIC, you’d think the Fed was the Lone Ranger of regulators, a vigilant crusader on behalf of homeowners raising red flags about toxic mortgage products and the looming housing bubble. He touted the Fed’s actions under a 1994 law called the Homeownership Equity Protection Act (HOEPA) that gave the Fed the power to prohibit “unfair,” “abusive,” and “deceptive” mortgage lending practices. “My colleagues at the Federal Reserve were aware of their responsibilities under HOEPA,” Greenspan said, “and took significant steps to ensure that its consumer protections were faithfully implemented.”

The Fed used its 100-strong consumer protection division to gather on-the-ground information on lending practices through meetings held in cities like Charlotte, Boston, and San Francisco, Greenspan said. And, he added, between 1996 and 2007 the Fed had issued ten different “interagency guidance” papers—in essence, advice or warnings offered to banks and non-banking institutions on subjects like adjustable-rate mortgages and consumer disclosures on mortgage contracts.

What Greenspan left out is those guidance papers, as their name implies, didn’t require the recpipients to take any action whatsoever. He also neglected to mention that in spite of boatloads of research showing the proliferation of abusive lending practices, the Fed, as the Washington Post reported, not only blew off those worrying signs but refused to supervise lenders and their compliance with federal consumer protection laws. In 1998 it even adopted a policy “to not conduct consumer compliance examinations of, nor to investigate consumer complaints regarding, nonbank subsidiaries of bank holding companies.” And when non-bank lenders were snapped up by big banks, which the Fed did actively supervise, it declined to scrutinize those non-banking subsidiaries.

Greenspan’s own intransigence played a direct role in the Fed’s hands-off philosophy. As the Post reported, the former chairman argued that inspecting subprime lenders and non-bank institutions would require too much effort and, curiously enough, would give borrowers a false sense of security. It was a contentious move by Greenspan, but his view won out in the end.

Testifying before the FCIC, Greenspan tried to absolve the Fed’s laissez–faire approach by saying HOEPA was both too narrow—covering a small part of the market—and too ambiguous. “The concepts of ‘unfairness,’ ‘deception,’ and ‘abusiveness’ are not defined in the statute,” Greenspan said, adding that there was no consensus in the Fed on whether entire categories of loan products should be considered “abusive” or “deceptive.”

That consensus, however, did exist among state regulators and fair lending groups. They singled out [pdf] products like no-income-no-job-no-assets, or NINJA, mortgage loans; “liar” loans, in which borrowers didn’t have to prove their income; and negative amortizing loans, when a borrower’s balance actually increased as they made payments. All those loan products, consumer advocates say, are fundamentally toxic and were at the root of the meltdown. Surely the 100 or so Fed staffers tasked with consumer protection during Greenspan’s era could’ve spotted those blatant abuses.

Instead Greenspan blamed Congress and the national push for increased homeownership for hand-cuffing the Fed and preventing it from cracking down on predatory lending. “Congress would have clamped down on” the Fed had it gone after subprime lenders, he claimed.

Greenspan told the commission that he warned in 2004 of the perils of Fannie Mae and Freddie Mac’s decision to gorge on toxic loans, which the two government-sponsored corporations bought from lenders and securitized. This was the same Greenspan who told 60 Minutes in 2007 that he “had no notion of how significant [Fannie and Freddie] had become until very late.” So he both knew and didn’t know about the looming threat of Fannie and Freddie’s toxic mortgage binge.

Greenspan even sought to revise the history of how his own Ayn Rand-inspired, free-market philosophy had impacted the Fed under his tenure. Under questioning from commission member Brooksley Born, the former Commodity Futures Trading Commission chairwoman who famously battled the Clinton-era deregulation hawks, Greenspan said his own worldview didn’t enter the equation; he merely enforced the laws Congress had put in place. Yet it was Greenspan, revered as an economic oracle during the 1990s and early 2000s, who publicly supported the Gramm-Leach-Bliley Act, a historic piece of deregulation that scrapped the Glass-Steagall Act’s firewall between commercial banks and investment firms and allowed a veritable Wild West to emerge for risky finacial products like derivatives. In 2000, Greenspan also argued that regulation of derivatives, which played a major role in wreaking havoc on the global economy, was unnecessary.

Greenspan hasn’t been entirely unrepentant. In September 2008, he conceded he’d been wrong about the free market, that he’d found a “flaw” in his way of thinking. Since then, however, he’s sought to whitewash the history of the Federal Reserve under his guidance and recast his two decades at the helm of the central bank in a far more favorable light. But critics, including Born, aren’t buying it. “The Fed utterly failed to prevent the financial crisis,” she said on Wednesday. “Failed to prevent the housing bubble, failed to prevent the predatory lending scandal.”