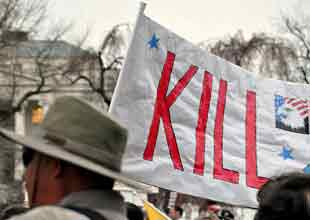 As the prospect of a violent backlash against health care reform has escalated, you can add one more name to the list of lawmakers who’ve been targeted over their views. Sen. Ben Nelson, the conservative Nebraska Democrat who voted for the main Senate health bill, has confirmed to Mother Jones that he’s been threatened. “We’ve experienced it,” Nelson said, walking off the Senate floor on March 25. But he added: “I don’t talk about it.”

Throughout the debate, Nelson’s office has been flooded with thousands of calls and emails from people “very emotionally charged up, for or against health care reform,” Nelson’s communications director, Jake Thompson, said Thursday. “He chose to try to participate in the debate rather than sit on the sidelines.” But Nelson’s office declined to provide details about specific incidents. When asked whether the FBI was investigating any of the individuals who’ve lashed out against Nelson, Thompson replied, “I’m not going to say.” (He noted, however, that the Senator “might comment when he gets back here next week” after the congressional recess is over.)

In the wake of the heated reaction to his health reform position—after much wavering, Nelson voted for the Senate bill but against the reconciliation fixes to it—Nelson has assumed a lower profile on the issue back at home during the recess. He has not held town hall meetings, opting instead for conference calls. He has also reached out directly to reform opponents like the local Chamber of Commerce. And though he’s referred to health care in some of his recent speeches, Nelson has turned his focus to Nebraska-specific issues like road-building projects. In the meantime, Tea Party groups have organized a large rally in the state’s capital, Lincoln, which is scheduled for next Tuesday, and have continued to pummel Nelson, the only member of Nebraska’s congresional delegation to support the bill, over his vote.

Nelson’s reluctance to publicize the details of the threats he’s received stands in sharp contrast to those Democrats and Republicans who have been vocal about the extremism directed at them. When asked at the end of March about the threats his colleagues were beginning to experience, Nelson remarked, “It’s unfortunate that when you have people threatened to begin with, or if acts of violence are used against people, for whatever purpose, it’s wrong.”

Thompson, the Nelson staffer, noted that the volume of calls and emails that the Nebraska Senator has received has “faded some now that the bill’s been passed.” But with the recent arrests in cases involving death threats received by lawmakers including House Speaker Nancy Pelosi (D-Calif.) and Sen. Patty Murray (D-Wash.), the concern about potential violence only seems to be growing.