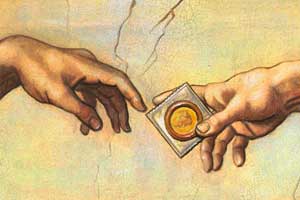 SINCE 1870, WHEN the Roman Catholic Church formally pronounced popes infallible, a lot of Vatican energy has gone into claiming that doctrine never changes—that the church has been maintaining the same positions since the time of Jesus. Of course, historians know better: Dozens of church conferences, synods, and councils have regularly revised the teachings, all the while claiming utter consistency. Thus, when the advent of the birth control pill in the early ’60s coincided with a major push for church modernization, there was widespread hope among Catholics that the reform-minded Pope John XXIII would lift the church’s ban on contraception. After all, the Second Vatican Council had explicitly called for greater integration of scientific knowledge into church teaching.

John did establish a small commission for the Study of Problems of Population, Family, and Birth, which his successor, Paul VI, expanded to 58 members. Its job was to study whether the pill and issues such as population growth should lead to a change in the church’s prohibition on all forms of contraception (other than abstinence during periods of fertility—the “rhythm method”). The commission was led by bishops and cardinals, including a Polish bishop named Karol Wojtyla, the future Pope John Paul II. (The Polish government did not allow Wojtyla to attend meetings.) They were assisted by scientists, theologians—including Protestants, whose church had ended its own opposition to contraception three decades earlier—and even several lay couples. One of them, Patty and Patrick Crowley from Chicago, carried letters and stories from Catholic women worn out by multiple pregnancies, medical problems, and the financial burdens of raising large families. The commission deliberated for two years, amid much anticipation from the faithful.

The Vatican’s position on birth control has long held something of a paradox: Catholics are encouraged to plan their families, to bear only the number of children they can afford, and to consider the impact of family size on a community and the planet. In recent years, under Pope Benedict XVI, the church has also made a major push to embrace environmental stewardship. Yet Catholicism has also been the most intransigent of the world’s religions on the subject of contraception, alone in denying its use even to married couples.

This may have made some theological sense in the first century of Christianity, when Jesus’ followers believed he would return in their lifetime: Their mission was to prepare for the Second Coming by devoting themselves to the worship of God. Sex, they believed, was a distraction. The good life was best lived in celibacy—even in marriage. When the wait for the Second Coming evaporated, the belief that sex for its own sake was sinful did not, and abstinence remained the ideal.

Yet by the first half of the 20th century, change seemed to be in the air. In 1930, Pius XII issued the encyclical (papal letter) Casti Connubii (“on chaste wedlock”), which acknowledged that couples could seek pleasure in their sexual relations, so long as the act was still linked to procreation. Then, in 1966, Paul VI’s birth control commission presented its preliminary report to the pope. It held big news: The body had overwhelmingly voted to recommend lifting the prohibition on contraceptives. (The former Archbishop of Brussels, Cardinal Leo Suenens, went so far as to say the church needed to confront reality and avoid another “Galileo case.”)

Catholics rejoiced, and many began using the pill at once. But their hopes were dashed when, in July 1968, Paul VI released an encyclical titled Humanae Vitae (“on human life”), reaffirming the contraceptive ban. It turned out that three dissenting bishops on the commission had privately gone to plead with the pope: If the position on contraceptives was changed, they said, the teaching authority of the church would be questioned—the faithful could no longer trust the hierarchy.

Ironically, it was the prohibition on contraception that would help erode the church’s power with European and American Catholics. Laypeople overwhelmingly disregarded it, and bishops throughout Europe undermined it with statements reassuring couples to “follow their consciences.” American bishops were more circumspect, but a survey of Catholic priests in the early ’70s showed that about 60 percent of them believed the prohibition was wrong. Father Andrew Greeley, a noted sociologist, traces the decline in church membership and even vocations to the priesthood in the mid-1970s to Catholics’ disillusionment with the church’s integrity on birth control.

The church then turned its attention to Africa and Latin America—where bishops were more dependent on the Vatican for support, and Catholics, it was thought, were more traditional in their views of marriage and sexuality. The Vatican was able to keep the flock wary of modern birth control in part by linking it to colonialism: The West, the argument went, wanted to control poor people and reduce their numbers, instead of addressing the causes of their poverty.

A Congressional Research Service report on the 1994 United Nations population conference in Cairo recounts the church’s decades-long fight against population and family planning aid: “The Vatican…has sought support for its views from the developing world by accusing the West of ‘biological colonialism’ in promoting family planning programs and has sought allies in the fundamentalist Islamic nations of Libya and Iran.” (In this endeavor, it had the support of the Reagan and Bush administrations, which battled global family planning efforts seen as Trojan horses for abortion rights.)

The birth control-equals-colonialism argument was undercut, however, at the 1994 conference, when the UN for the first time framed the right to reproductive health as a human right. The shift was unwelcome news inside the Vatican­—where the conservative Pope John Paul II had begun to dismantle some of the reforms of the ’60s—and it hardened the church’s resolve. Suddenly, opposition to contraception became almost as high a priority as battling abortion. At the UN, the Holy See announced that if family planning were designated as a part of primary health care—a designation that would define the terms of international aid for churches and NGOs.

Even US bishops, who had pretty much ignored contraception for 20 years, began a fresh effort to persuade American Catholics. A new “theology of the body” postulated that eschewing artificial contraceptives could foster deeper, more spiritual relationships, even—in a bit of Goddess-speak—put women in touch with nature. But few Catholics bought into the new rhetoric; it is estimated that pill use among American Catholic women is slightly higher than in the US population at large.

What will it take to get past this paradox? In my view, nothing short of a change in the rules that prohibit priests from marrying. It is no accident that the religions most in favor of contraception—such as Anglicanism—are those that have long allowed their clergy to marry. The Catholic Church had married priests for its first 1,000 years, until it became difficult to support their wives and children (and to determine which property belonged to the church and which to the family).

The vehemence with which today’s church defends the ban on contraception—Benedict XVI has shown no sign of departing from his predecessor’s position on the issue—is the same with which it refuses to consider a change to the celibacy principle. No pope understood this better than John Paul II, who reserved his harshest condemnation for priests who defied the marriage ban. He knew that if the church’s leaders had families to provide for, the ban on contraception wouldn’t have a prayer.

This story originally ran under the headline “Close Your Eyes and Think of Rome: How close did the Vatican come to embracing birth control?”