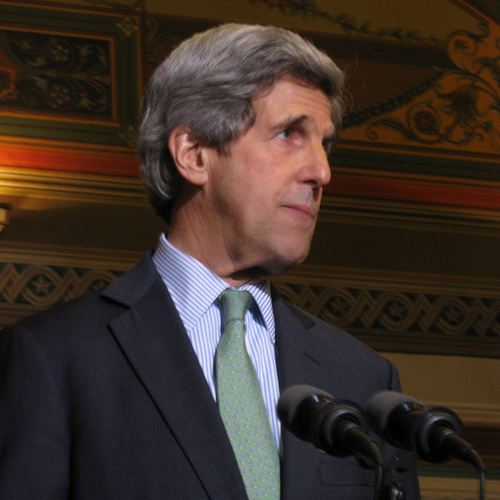 Sens. John Kerry and Joe Lieberman are reportedly planning to meet this afternoon with Lindsey Graham in a last-ditch effort to salvage the climate and energy bill the three senators have been working on for months. The legislation, scheduled to be unveiled today, was thrown into chaos this weekend after Graham threatened to abandon negotiations unless Democrats committed to advancing energy and climate ahead of immigration reform.

Meanwhile, advocates for climate action are trying to figure out whether there’s still a chance that the trio’s bill—which Kerry has called the “last, best shot” at tackling global warming this Congress—still has a chance or is already dead in the water. Greens were already plenty nervous about the rollout of the bill, as leaks about the draft indicated it would be very friendly to business interests. But if Graham follows through with his threat, there may not be a bill at all. “It’s hard to know if this is jockeying for position, or if this is a watershed,” said David Hamilton, director of the global warming and energy program at the Sierra Club. “I think we just have to wait a few days and see how it shakes out.”

Hamilton pointed out that Graham “certainly appeared serious.” However, Graham’s been able to wring a lot out of this bill, including major investments in nuclear power and increased offshore drilling. It’s not clear how many of those concessions would survive if he walked away. Hamilton added that the South Carolina senator has also invested a lot of political capital in the bill. “It’s hard to believe that it would all just end up on the kitchen floor.”

“I think [Graham] certainly wants to be at the table,” said Joe Mendelson, director of global warming policy at the National Wildlife Federation. Mendelson tried to give the delay an optimistic spin, noting that it “may end up galvanizing even more of an effort for folks who say this is an absolute priority.”

The senators expected oil giants Shell, BP and ConocoPhillips to back their effort, as well as nuclear giant Exelon and the utility trade group Edison Electric Institute. As the Washington Post reports, even the Christian Coalition planned to stand up with senators at today’s event. However, Greenpeace issued a statement Friday saying that the group “cannot support this bill” without substantial changes.

Kerry and Lieberman are now attempting to smooth over all of these tensions and coax their only Republican ally back to the table. “I look forward to Senator Graham rejoining our efforts after we work through the concerns that are preventing us from advancing a cause the three of us believe in so deeply,” said Lieberman in a statement Saturday. The senators are also reportedly still planning to send the bill to the Environmental Protection Agency today for review, a process that can take up to six weeks and would need to be completed before the Senate could take it up for debate.

Meanwhile, Democratic aides are trying to downplay the spat. As Politico reported this morning:

“Reports of the demise of climate change legislation have been greatly exaggerated,” said a senior Democratic aide involved in the talks on condition of anonymity.

Discussions are going to resume on Monday,” the person added. “It’s not going to be easy, but the good news is that this is not a substance problem; it’s a process problem that can be overcome. Everything was coming together, and it would be a shame to throw it all away.”

However, a lobbyist for major energy companies says that the delay is just further evidence that there are major substance problems, and that the senators never had all that much support for their efforts in the first place. “[W]hile it’s tempting to view the immigration dust up as an external force disrupting the climate discussion, all was not completely well even before the recent events,” said Scott Segal of Bracewell & Giuliani, a firm that represents energy companies like Southern Co. and Duke Energy Corp., noting that there were still a number of hotly contested issues regarding the bill. “So, if the immigration fight lit the match, there was already some smoldering in advance of today’s planned event.”

Will the meeting this afternoon between Kerry, Lieberman, and Graham succeed in putting out the fire? Stay tuned!