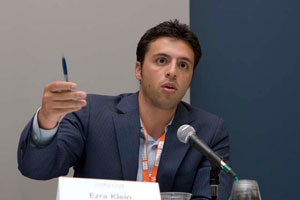 There’s a bit of chatter on the intertubes about this piece by Politico/Yahoo News media reporter Michael Calderone. In it, Calderone examines the arrival of reporter-blogger wunderkinds like Ezra Klein and Andrew Ross Sorkin and Dave Weigel at old-school media establishments like the Washington Post and the New York Times. The thesis of the piece seems to be contained in this quote from Andrew Sullivan, the philosopher-king of the blogosphere:

“Voices matter,” Sullivan continued. “Trust in the old media brands is largely over. Everything has an individual character or dies.”

Fair enough. Here at Mother Jones, we have people like Kevin Drum and David Corn—people whose individual brands aren’t necessarily tied up in their association with the magazine or our website. And Kevin and David are big traffic drivers. So there’s definitely a certain truth to Sullivan’s theory. But I actually thought the most interesting part of Calderone’s piece was the end, where he quotes Bill Wolff, the executive producer for “The Rachel Maddow Show” on MSNBC. This is the key bit:

Wolff said he believes that [Ezra] Klein has “done a better, more thorough reporting job on the health reform stuff” than anyone else, and he would continue to have him on the show whether he worked at the Washington Post or simply blogged at EzraKlein.com. Weigel, he said, came to the producers’ attention because of his byline on tea party stories that were making the rounds online, not because of any instant name recognition of the publication he worked for…. “Greg Sargent works for ‘The Plum Line,'” Wolff said. “I don’t know many people who know what that is. But we read Greg Sargent every single day.”

“I don’t mean to discredit the companies who employ these people, but as long as the person’s reporting is accurate — as long as they’re not making stuff up — then it doesn’t matter where they work,” Wolff said. “That’s the egalitarian nature of the Internet.”

I don’t think this is quite right. It’s not enough to be a good, accurate reporter. The internet is filled with folks who can find things out—people who are accurate and smart and thorough. What separates the Ezra Kleins and Andrew Ross Sorkins of the world* from everyone else is that they can explain what they’ve learned in a useful, engaging way. Their writing has a voice that cuts through the he-said/she-said drone of newspaper reporting. And despite the expertise they’ve acquired, they care about breaking down complicated subjects in a way that matters to non-experts. All those things are hard to do. Good for them.

*It is definitely interesting that everyone mentioned in the Calderone piece (except for Megan McArdle, who’s not mentioned in the same context as Klein and Sorkin) is male. What’s up with that?