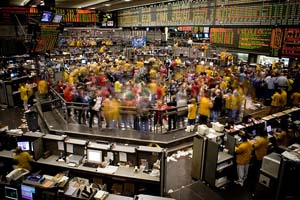 Back in action after its two-week recess, Congress will soon take up its latest daunting legislative battle: rewriting the rules of the American financial system. In their nearly year-long debate, lawmakers have clashed over everything from the creation of a new consumer protection agency to protecting the economy from too-big-to-fail mega-banks.

This month, as the Senate resumes work on its draft, numerous showdowns loom—between Wall Street and Congress, Democrats and Republicans—on dozens of aspects of the 1,300-page bill. Some of the controversial provisions you know; but others have so far slipped mostly under the radar. Here are five looming battles sure to pit lobbyists against lawmakers and lawmakers against their colleagues. The outcome of these skirmishes could ultimately determine whether the bill fixes the flaws in our financial system or merely pays lip service to reform.

1) Shining a Light on Shadow Banking

The shadow banking system is the murky terrain of non-commercial banks, hedge funds, and other institutions that operate outside the scrutiny of federal regulators and parallel to the traditional banking system. Before the economic crisis, this financial netherworld included non-banking behemoths like Lehman Brothers, Goldman Sachs, and Morgan Stanley, and reached $10 trillion in size in 2007—rivaling the traditional banking sector. Many of its big players created and traded heavily in complex financial products like credit default swaps and collateralized debt obligations—which their proponents claimed helped to circulate credit throughout the global financial system, among other uses.

When the shadow market started to collapse in 2007, that source of credit began to dry up. At the same time, the Lehmans and Goldmans of the shadow banking system were highly leveraged—they’d borrowed huge sums to magnify their bets. When the economy tanked, their losses were staggering. Lehman’s debts were so out of proportion to its assets that when the crash came, the firm crumbled with it. (As Lehman’s autopsy report revealed, the firm went so far as to hide its staggering leverage levels in order to make it look healthier.)

How can lawmakers make sure risky shenanigans in the shadow banking system won’t again wreak havoc on the entire economy? The Senate bill calls for new rules on capital requirements—which in plain English means mandating that an institution keep a certain amount of cash on hand to cover losses if its bets go bad. Forcing shadow banks to boost their reserves would go a long way toward preventing dangerous collapses a la Merrill Lynch or Bear Stearns. Of course, saying we need capital requirements and deciding what those should be are two very different actions. Right now, there’s little, if any, consensus on what those capital requirements should be, and Treasury Secretary Timothy Geithner has shown little appetite for pushing this issue.

When it comes to leverage, there’s some cause for optimism: The House’s version of financial reform sets a 15 to 1 leverage limit, meaning future Lehmans can’t hold more than $15 in debt for every $1 in assets. (The big investment banks had leverage levels of 30 to 1 or higher just before the crash.) The big question is whether the Senate will follow suit, as GOPers have reportedly objected to new capital requirement rules.

The toxic mortgage bonds and other products that helped demolish the economy were stamped with blue-chip ratings from the big three ratings agencies—Moody’s, Standard and Poor’s, and Fitch. Why did they affix their seal of approval to junk investments? The answer is complex, but largely centers on the fundamental conflict of interest with the rating agencies: they get paid by the same firms that are seeking ratings for their products. This arrangement allowed banks to shop around for the highest score regardless of whether the product deserved it or not.

It’s not clear whether the Senate bill will fix this problem. Senate banking committee chair Chris Dodd (D-Conn.) has proposed creating a new watchdog within the Securities and Exchange Commission to keep an eye on the agencies. The bill would also give investors the right to sue them for “a knowing or reckless failure” to thoroughly investigate a product before issuing a rating. But will that SEC watchdog address the conflict of interest in how rating agencies get paid? Will it revisit the pseudo-governmental role played by the Big Three agencies, whom the SEC has used as official arbiters of safety in the markets? These questions, raised by academics, experts, journalists, and others, have yet to be fully addressed by the Senate.

In the aftermath of the financial crisis, the stratospheric pay packages of top executives sparked widespread outrage. The Dodd bill would tackle this by giving shareholders a “say on pay” via a non-binding vote on executive compensation deals. The bill would also allow the SEC to give shareholders proxy access—that is, the ability to vote without actually attending a shareholder’s meeting—to nominate directors at financial institutions. The goal of this provision would be to “help shift management’s focus from short-term profits to long-term growth and sustainability.” (The House financial bill includes a similar provision.)

These provisions have already come under heavy fire from Wall Street—and expect the assault to become fiercer as the debate over financial reform heats up. In February, ten heavyweight industry groups—including the Business Roundtable, Financial Services Roundtable, the National Association of Manufacturers, and the US Chamber of Commerce—penned a letter decrying shareholder reforms to the Senate banking committee, which was then still crafting its bill. Those provisions, the letter said, will “lead to serious unforeseen (and unforeseeable) consequences that will inhibit job creation, endanger the ongoing economic recovery, and prevent the American economy from reaching its full potential.” Republican senators on the committee also submitted multiple amendments last month that would weaken the bill’s provisions to empower shareholders.

The provision could garner support from no less than President Obama himself, who as a senator publicly pledged his support for a “say on provision” for shareholders.

One antiquated and longstanding rule of the financial system is that investment advisers, who offer guidance to the average investor, are required by law to find the best possible investment for their client while disclosing how much they might make from the deal. Brokers, who also provide investing advice, in addition to buying and selling securities for others, aren’t held to that standard—leaving them free to hawk complicated products to clients that will net them hefty fees. Sometimes the products in question are even made by the same firm employing the broker. (In 2006, there were about 10,000 investment advisers and 5,000 brokers in the financial services industry.) A November draft of the Dodd bill sought to address this discrepancy by making brokers subject to what’s known as a “fiduciary standard”—meaning that they would have to put their clients’ interests above how much commission they stand to make on a deal.

But the brokers fought back. Brokerage firm Edward Jones said the provision could ”lead to a change that would not be to the benefit of the individual investor.”  Supporters of the proposed change say these sorts of claims are misinformation at best. However, instead of applying new rules to brokers, Dodd’s draft legislation now only commissions a study on the effects of implementing a fiduciary standard for them. The North American Securities Administrators Association, which represents state securities regulators, said in a letter to the banking committee that it was “profoundly disappointed” with this change. “The study language is the culmination of a massive lobbying effort by some in the financial services industry,” wrote NASAA’s president Denise Voigt Crawford. Pushing for the standard would go a long way toward protecting Main Street investors, who have suffered massive losses in recent years.

Flying mostly under the radar is a provision in the Dodd bill that would require certain mortgage companies to retain a financial stake in the loans they issue. The proposal, known as “risk retention,” would signal a major change from the subprime heyday of the early- to mid-2000s, when mortgage companies like Countrywide and Long Beach Mortgage Company bundled billions of mortgages into bonds backed by pools of those loans. Those bonds were then purchased by Wall Street or Fannie Mae and Freddie Mac, the two government-sponsored housing corporations. This process allowed the Countrywides and Long Beaches to sign up borrowers for sketchy loans and then shift all the risk—say, if a homeowner defaults—onto the investors who bought the bonds. The shoddy quality of the loans underlying the bonds was someone else’s problem.

When Dodd released an earlier reform proposal last year, it suggested requiring companies that package and sell mortgage-backed securities to retain at least 10 percent of the risk, meaning they’d be partially on the hook if the loan defaulted. (Bonds made up of loans meeting certain standards would be exempt from the rule.)

But the rule has already been watered down, as a memo from the Mortgage Bankers Association shows. Now, the Senate bill only requires securitizers to retain 5 percent of the risk.

How this issue will play out remains unclear. The MBA’s memo suggests that the organization will press Senate lawmakers for the provision to be undermined even further. One key GOP player on the banking committee, Sen. Bob Corker (R-Tenn.), may not be a fan: he has said he fears that forcing securitizers to retain a portion of the risk of the loans could eat up the money on their books. But some liberal senators have supported the provision. This will be a fight to watch.