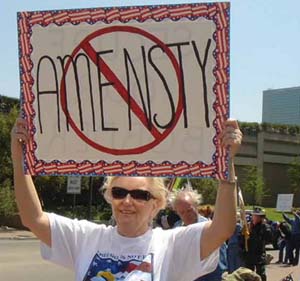 Senate Majority Leader Harry Reid recently declared that Democrats would take up immigration reform “this year,” defying the conventional wisdom that the issue is too perilous for the party to push during an election year. But maybe it’s Republicans who should be nervous—because a high-octane immigration fight could drive a wedge between the Republican Party and the Tea Party right.

“It becomes a very explosive argument when you talk about legitimizing immigrants,” says retired GOP Rep. Tom Davis, the former chair of the National Republican Campaign Committee. “From a Republican point of view, there is a dilemma.”

The Republican Party got badly burned when Congress last considered immigration reform in 2006 and 2007. Some GOP legislators, including Sen. John McCain, championed a bipartisan bill that would have provided a path to citizenship for millions of undocumented immigrants. But this proposition outraged the conservative base, who decried it as an “amnesty” for law-breakers. The right-wingers won the day—their attacks torpedoed the legislation. But this victory came at a cost. George W. Bush had worked hard to woo Latino voters, hoping to bring them into the GOP fold. In the 2008 presidential election, however, Latinos flocked to vote for Obama. Such fights “underscored their divisions—between their rural and conservative blue-collar supporters and their more business-oriented and pro-trade segments of the party,” says Democratic pollster Stan Greenberg. And the party has yet to recover from the fallout. “Republicans ought to be embracing them instead of chasing them away,” says Davis, referring to immigrants. “It hasn’t. It’s gone from bad to worse in some ways.”

The emergence of the Tea Party has only widened this rift within the conservative movement. Perhaps the person who best illustrates the division is former House majority leader Dick Armey, a vigorous proponent of immigration reform. Armey, however, is also the head of FreedomWorks, which has played a key role in organizing the Tea Partiers—whose activists can regularly be seen bearing signs with nativist slogans at their rallies. In fact, a group called “Tea Partiers Against Amnesty” is organizing protests across the country this week.

Recently, these two factions have started to clash out in the open. Last month, Armey called anti-immigrant crusader and former Republican representative Tom Tancredo a “destructive” force in the GOP, adding that “the Republican Party is the most naturally talented party at losing its natural constituents in the history of the world.” His comments prompted a vehement backlash from conservatives like Michelle Malkin, who slammed Armey as an “amnesty stooge.” Similar rifts can be seen in Arizona’s GOP Senate primary race, where the Tea Party-backed candidate J.D. Hayworth has assailed for McCain for his role in crafting the 2007 immigration bill. Though McCain has lurched right on the issue—going so far as to call for the National Guard to be dispatched to the Arizona border—he remains cagey about whether he’d support the kind comprehensive reform bill that he once championed.

WIth the rise of the Tea Party, even the elements of immigration reform that most Republicans agree on—namely tougher border security—may create “difficulty for some conservatives, as an imposition on business, a government mandate,” says Douglas Holtz-Eakin, a former top adviser to McCain’s presidential campaign. “A lot of immigration reform is very interventionist.”

Still, not all Republicans are shying away from the issue. “We clearly need to be proactive in terms of reforming the system…[and] figure out the political calculus of that,” said Brendan Steinhauser, director of federal and state campaigns at FreedomWorks. In fact, some Bush-era conservatives are quietly trying to push the GOP back towards embracing immigration reform. In February, the American Principles Project—a group founded by Christian conservative thought leader Robert George—launched the Latino Partnership for Conservative Principles. The organization is trying to build momentum for comprehensive reform. And in an effort to revive the Bush-era outreach to Latinos, the Latino Partnership has recruited the former president’s chief of the US Office of Citizenship, Alfonso Aguilar, to serve as a spokesman. But it’s keeping its distance from the overwhelmingly white Tea Party base. “The Tea Party hasn’t come up yet as something we’re going to target immediately,” says Allegra Hewell, the group’s communications director

Of course, tackling immigration reform presents political pitfalls for Democrats, too—labor unions would surely protest any move to expand the guest-worker program, especially with unemployment numbers still high. And Reid himself seems to have cooled on the idea, saying this week that he wouldn’t raise immigration during the current work period, which ends by Memorial Day. But Davis, the former NRCC chair, offers some strategic advice. If he were a Democrat, immigration reform “would have been been one of my first orders of business. If you were to pass it…it would bring eight to 10 million new voters” to the Democratic Party, Davis says. “Game, set, match. I’m surprised they’ve waited this long.”