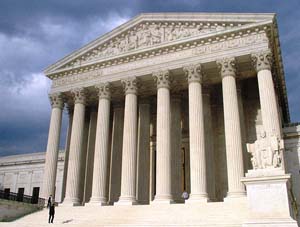 When Justice John Paul Stevens announced his retirement from the Supreme Court last week, he set off an avalanche of questions. Will President Barack Obama opt to replace him with a moderate nominee or a very liberal one? How might a new justice affect the direction of the court? But the big political question is this: Will a Supreme Court confirmation battle help Republicans?

“Politically, yes,” says GOP strategist Mindy Finn. And other Republican consultants agree: The upcoming fight over Stevens’ replacement—no matter how big or small, no matter whom Obama picks, no matter whether that person is confirmed or not—is a major opportunity for conservative and Republican politicos.

Obama said on Friday that he’d like a new justice confirmed by the October recess. That means the Senate will be debating a nominee just as the midterm elections are heating up. Whoever is nominated, Republican and conservative groups will use the hearings to rally supporters and raise money—perhaps to use more for the congressional contests than for any effort to defeat the nominee. “Different groups will use a Supreme Court fight differently. The one common denominator, of course, will be donors and supporters,” says Michael Turk, a Republican new media strategist, and, he adds, the Republican National Committee and the National Republican Senate Committee—the party’s major fundraising arms—”will use it to portray the left as out of the mainstream, too liberal.”

The confirmation debate could also hand both Republicans and Tea Party activists a chance to super-charge their attack on the constitutionality of health care reform and prolong the sparring over that issue at a time when Democrats had hoped to shift the conversation to jobs and financial regulation. “I’d expect the constitutionality of federally enforcing the purchase of a good or service to enter the debate,” says Finn, referring to the lawsuits that 14 states have brought against the federal government arguing that the mandate requiring all citizens to purchase health insurance violates the Constitution.  As the New York Times reports, Rep. Mike Pence (R-Ind.)—who’s been at the forefront of GOP outreach efforts to the Tea Partiers—has already made this connection, warning that the court could have the final say on this matter. And long-term conservative judicial activists are already making inroads with Tea Party leaders in hopes of channeling the movement’s outrage about the mandate. High-profile confirmation hearings could give Republicans a platform to push this line of attack against Obama and his health care legislation.

A Supreme Court tussle could help Republicans another way: by serving as a headline-grabbing distraction from the issues that Democrats want to focus on before the midterm elections—that is, jobs, jobs, jobs. “The bigger worry [for Democrats] would have to be the time this takes off the clock for a White House and Democratic party looking to craft a better message on the economy. Every day they can’t repair themselves on that front is a lost day,” says Kevin Madden, a Republican strategist who works with potential GOP presidential candidate Mitt Romney. The White House had aimed to push through financial reform before the elections—which could help Democrats portray themselves as tough on Wall Street and working to prevent another recession. But confirming a Supreme Court justice “is just one more thing to complicate the legislative schedule,” says GOP pollster Dave Winston. “Even an uncontroversial [nomination] is remarkably time-consuming.” Given that the Democrats, as the incumbent party, appear more endangered, any political theater that sucks up oxygen from 2010 campaign efforts is likely to impede them more than the Republicans.

In political terms, it may not make much difference whether Obama opts for a safe choice like DC Circuit judge Merrick Garland or a more controversial pick like Seventh Circuit judge Diane Wood, who would present an easy target for social conservatives due to her rulings in hot-button abortion cases. Given that even minor details from a nominee’s resume can spark a political feeding frenzy—recall the “Wise Latina” ragefest ginned up from Sonia Sotomayor’s conventional resume—it won’t be hard for conservatives to turn any Obama pick into a political lightning rod just right for cable television clashes.

Democrats could also try to turn a Supreme Court fight to their advantage by calling out GOP obstructionism and rallying supporters around a nominee, as Organizing for America, Obama’s grassroots operation, did for Sotomayor. But a court confirmation will mostly distract from the Democrats’ election-year endeavors, while playing directly into the GOP’s preferred line of attack. Even before Stevens announced his retirement, Democrats like Senator Arlen Specter warned that approving a new justice this year could spark an ugly, knock-down, drag-out fight. Ugly or not, this is one matter Democrats will want to be over as quickly and painlessly as possible.