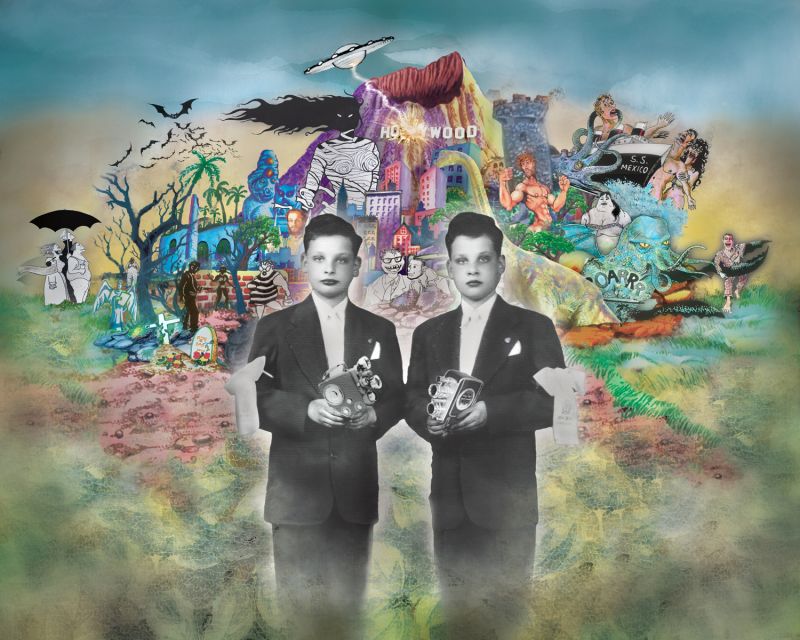 Underground filmmaking twins George and Mike Kuchar finally get their due in a new documentary filled with illuminating interviews, hilarious banter, and priceless footage of their work. It Came From Kuchar traces the origins of the brothers’ unique aesthetic, their impact on subsequent generations of filmmakers, and their ongoing devotion to movie-making.

Born in New York in 1942 (“In the same hospital as Tab Hunter,” adds George in an interview), the twins started directing films at an early age. They took cues from the conventions of 50s melodramas—Douglas Sirk films like Imitation of Life, Elizabeth Taylor in Butterfield 8—to create low-budget, histrionic films in their mother’s Bronx apartment. Their films starred the likes of their neighborhood friend’s middle-aged mother, and had titles like Born Of the Wind, I Was a Teenage Rumpot, and The Devil’s Cleavage.

John Waters, Guy Maddin, and Wayne Wang all cite the Kuchars as an important influence. (In It Came From Kuchar Waters calls them “true underground filmmakers,” says they should be knighted, and points to George’s cinematic use of turds as a precursor to his own Pink Flamingos; Maddin, discussing their aesthetic, recalls the actors’ “aggressively stylized voices” and remembers feeling as though “chocolate bars had been applied to the eyebrows,” which are like no other eyebrows in the history of film.)

At a time when Andy Warhol was making movies in which nothing happened, and non-narrative filmmakers like Stan Brakhage were making experimental, formalist films, the Kuchar brothers pumped out one mutant Hollywood melodrama after another—works that, in a climate of hip, affectless filmmaking, were “all affect.” Jonas Mekas, film critic for the Village Voice at the time, speculated that the makers of Barbarella had stolen ideas directly from the Kuchar film Sins of the Fleshapoids.

About a year ago, Fox News (in a segment titled “Perverts Put Out”) slammed the National Endowment for the Arts for funding screenings of the 1975 film Thundercrack! written by George Kuchar and directed by Curt McDowell, who was known for sexed-up films like Loads. The result, a hilarious and perverse movie that features a wig pulled from a vomit-filled toilet bowl, a female gorilla monster named Medusa, and a combination of narrative melodrama and graphic sex, is enough to make any moral conservative denounce the arts.

The Kuchar brothers are alive and well, living in San Francisco and continuing to make films. George Kuchar has taught at the San Francisco Art Institute since 1971, where he has, according to John Waters, “inspired four generations of kids to make films.”

It Came From Kuchar is an excellent introduction to the hysterical, unique, and often genuinely moving films of the Kuchar brothers. Watch the trailer below:

For a schedule of screenings, visit kucharfilm.com.