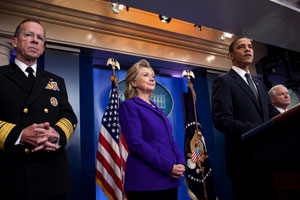 President Barack Obama has done much to make nuclear security a top-drawer issue. This week, he’s hosting 47 world leaders in Washington for a summit on the matter. No surprises are expected, and the “deliverables”—policy-wonkese for “outcomes”—are well known: a series of agreements in which nations will pledge to do more and cooperate better to secure nuclear material that could be used in a bomb. But the high-profile gathering—which follows Obama signing a new Start treaty with Russia to reduce US and Russian nuclear arsenals—has placed an often-ignored issue on the world’s radar screen.

As the summit proceeds, Obama and his aides will justifiably cite the importance of the endeavor under way. But while arms control advocates are grateful that Obama is drawing attention to the problem of loose-nukes material, they’ve questioned whether Obama has put his money (that is, taxpayer dollars) where his mouth is. Several days ago, the Fissile Materials Working Group, a collection of nonproliferation experts and groups, released a paper that analyzes Obama’s budget and concludes that he is not funding nuclear security programs adequately—especially given his rhetoric:

One year ago, President Barack Obama made a bold pledge to “secure all vulnerable nuclear materials around the world within four years.” His immediate follow-through, however, has been wanting. For instance, his fiscal year 2010 budget request to meet this goal was actually $200 million less than what the Bush administration allocated a year earlier for securing nuclear material abroad. In fact, the administration still hasn’t defined what it actually considers vulnerable nuclear material. So, in essence, Obama has lost a full calendar year in his four-year quest.

It’s also disappointing that the requested State Department budget to combat WMD proliferation and promote global threat reduction is down more than $5 million—including a substantial $18 million cut in the Nonproliferation and Disarmament Fund.

He has done somewhat better lately. His fiscal year 2011 budget request for securing fissile material increased by $320 million over the 2010 budget, and it forecasts growth in the coming years for key programs run by the National Nuclear Security Administration (NNSA). Ditto for spending in the other agencies that handle nuclear security–in particular the Defense Department and Cooperative Threat Reduction (CTR) Program.

But even this budget request isn’t adequate to meet Obama’s ambitious goal. Among all of these agencies, there is only one new initiative—CTR’s $74 million Global Nuclear Lockdown Program. (The rest of the larger nuclear security budget mainly accelerates existing activities without expanding their scope.)

The group notes that the Global Threat Reduction Initiative will receive a budget increase of $211 million. But it points out, “This is extremely important work, but it doesn’t meet the president’s ‘global’ pledge since some of the countries targeted, while certainly possessing dangerous material, don’t represent the world’s highest priority nuclear dangers. It also notes that Obama’s budget reduces the State Department’s programs to reduce WMD proliferation and promote global threat reduction by more than $5 million. The paper calls for beefing up funding for various nuclear security programs and for modifying a congressional limit on nuclear security spending in Russia and the former Soviet Union states that begins in 2012. And it urges Obama to use the summit to whip up support for a $3 billion-per-year global fund for WMD security. The report says, “At the end of the day the president’s four-year goal is unlikely to be met in the time frame he has endorsed for budgetary, bureaucratic, and diplomatic reasons. Thus, he must find the political will for nuclear material security that matches his rhetoric on the topic.”

It will take plenty of effort and attention—and money, too—to prevent nuclear terrorism.