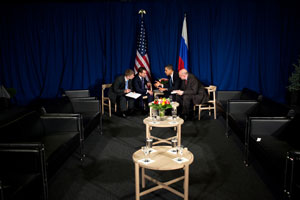 President Barack Obama and Russian President Dmitri Medvedev on Thursday morning signed a new Start treaty that would cut Russian and American warheads by 30 percent—to about 1550 warheads for each side. During the signing ceremony in Prague, Obama hailed the accord as an “important milestone for nuclear security and nonproliferation.” But the treaty has to be approved by two-thirds of the Senate—which means at least eight Republican senators will have to join with the 57 Democrats and the two independents who caucus with the Dems to okay this pact. And arms control advocates in Washington are concerned that Sen. Jon Kyl (R-Ariz.) might try to derail or delay ratification. Kyl hasn’t yet declared a position. He may want to kill the treaty outright, but arms control advocates suspect he might block it to gain leverage in his efforts to expand missile defense and to defeat a comprehensive treaty banning all nuclear weapons testing. But former President George H.W. Bush’s chief arms negotiator has a message for Kyl: don’t mess with this treaty.

At a Washington press conference on Friday morning, Richard Burt, who negotiated the first Start treaty in 1991, was asked what he would say to Kyl or other Senate Republicans considering obstructing ratification of the new treaty. Burt, who was also a senior State Department official in the Reagan administration, replied in strong terms:

I can say as a former political appointee of two Republican administrations, it will be very difficult for anybody to come up with a strong set of coherent arguments against this treaty. This treaty itself does not take sweeping steps to reduce either the United States or Russian deployed arsenal…..It’s a very small step toward further reductions.

Burt noted that this treaty would put the US-Russian arms control process “back on track” and “could lead to a much more profound set of agreements.” He noted that in the Senate, there will be “some outliers” who will vote against it. But he added,

Anyone who would vote against [the treaty] needs to think about the consequences of the signals we would send to the rest of the world….What would be the impact on proliferation?….What would it do to US leadership…on a whole range of international order issues?”

Burt, who is now the US chair of Global Zero, an international non-profit group that calls for the phased, verified elimination of nuclear weapons, noted that he’s confident that Sen. Richard Lugar (R-Ind.), the ranking GOPer on the Senate foreign affairs committee, will round up enough Republicans to ensure ratification. But Burt’s remarks were a sign that if Kyl or other Republicans attempt to block the new Start treaty, they will encounter criticism from Republicans and that a campaign of obstruction against the treaty could cause a split on the right.