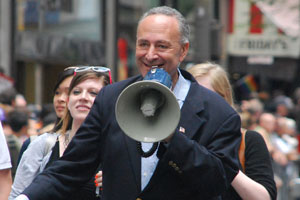 The immigration reform effort was dealt a big blow last weekend when Sen. Lindsey Graham (R-S.C.), who’d been collaborating with Sen. Chuck Schumer (D-N.Y.) on a bipartisan bill, threatened to abandon the effort entirely unless climate and energy legislation moved ahead first. It’s not yet clear what Graham’s stance actually means. But Schumer and other leading Senate Democrats are forging ahead with or without Graham, in keeping with Senate Majority Leader Harry Reid’s desire to accelerate the reform timetable and bring a bill directly to the floor. According to policy experts and advocates familiar with the state of play, Schumer and other Democrats are presently drafting a framework for immigration reform—an outline that is intended to be the precursor to a bipartisan bill.

“It’s an attempt to open things up a bit, to encourage people who might not be ready to go all the way but who are ready to signal quiet support for doing things and give them a vehicle for doing that,” one Washington immigration advocate says. Other experts say they’ve heard of similar movement by top Democrats. “I expect the Democrats will introduce something, not necessarily a bill,” says Angela Kelley, vice-president for immigration policy and advocacy at the Center for American Progress. “Democrats need to say where they stand on this…if they’re smart, they would put something out that invites the Republicans to the table.” According to immigration advocates, the new outline for a reform bill is expected to adhere closely to the bipartisan measure that Schumer and Graham had been previously working on—which includes provisions for tightened border security, a guest-worker program, biometric identity cards, and a pathway to legalization.

In the meantime, Senate Democrats are staying mum about the reports of progress. A spokesperson for Sen. Robert Menendez (D-N.J.), Afshin Mohamadi, declined to say whether the New Jersey lawmaker—the only Hispanic senator and a party leader on immigration issues—and his colleagues are resuming their efforts to push forward with immigration. “Things are very fluid in regards to the immigration issue. We’re not to say anything publicly at this point,” Mohamadi says. Reid spokesman Jim Manley says that he’d “defer to Senator Schumer,” whose office did not respond to a request for comment.

In light of the passage of Arizona’s draconian immigration law, advocates have been ramping up the pressure on the Democratic leadership to demonstrate some concrete sign of progress by May 1, when nationwide immigration reform rallies are scheduled. They say they won’t be satisfied until they see a more detailed plan from the leadership but seem encouraged by the reports of progress. “Schumer is still interested in pushing forward with this despite Graham’s concerns about moving forward with immigration reform,” says Greg Chen, director of advocacy for the American Immigration Lawyers Association. “The Dems will likely come forward with something even if they do not have Republican support at this point.” The Washington immigration advocate adds, “They want to show Harry Reid they’re ready to get something to the floor.”

Though Democrats appear to be picking up the pace on immigration reform despite Graham’s about-face, they need Republican support if they’re serious about passing a bill—a political reality that even the most vocal immigration reform supporters acknowledge. “Getting out of the gate, it doesn’t have to have a Republican on there, but they need to continue to work to have Republicans on,” says Chen. Of course, the big question is whether this framework is a serious and genuine attempt to move ahead with immigration legislation—or merely a political play designed to win Hispanic votes for Democrats in the upcoming congressional elections.