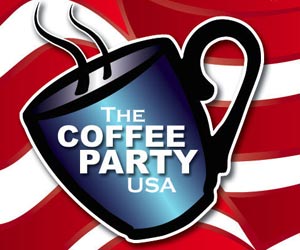 Before Tenisha Idowu decided to shake the hand of Dale Robertson, founder of TeaParty.org, there was a long war between her head and her heart. On the one hand, the image of Robertson holding a sign that read, “Congress=Slave Owner, Taxpayer=Nigger” burned a hole in her memory. But Idowu was now the “point organizer” of the Houston Coffee Party, a local chapter of a national grassroots movement that wants to bring civility and inclusiveness to political discussions. She wanted to end what seemed like irrational shouting during the healthcare reform debate in 2009.

So when a fellow Coffee Party organizer introduced Robertson to Idowu by email, she decided to invite him to their strategy meeting on March 16. As Robertson, Idowu and other Coffee Party members debated different solutions to reforming health care, they didn’t find a common approach. But that wasn’t the point, Idowu said. The point was to begin a conversation in person where people with very different viewpoints develop some empathy for each other.

It was this very sentiment that inspired documentary filmmaker Annabel Park to launch Coffee Party USA in January for those who felt their voices had been drowned out by the conservative tea party movement. Ever since Idowu started volunteering in February, the Houston Coffee Party has met almost every week. As of April 8, The Coffee Party’s national Facebook page boasted 197,721 fans compared to the Tea Party Patriots’ 158,768.

Mother Jones talked with Idowu about her work with the Coffee Party.

Mother Jones: What does volunteering for a Coffee Party look like on a daily basis?

MJ: Which issue has the most energy in Houston right now? What’s really moving people to come to these meetings?

TI: Education. This is Texas and we have the State Board of Education that made all of those proposed amendments to the curriculum. Education group is really passionate to make sure we respond to their changes during an open comment time. We just finished our final draft statement and are in the final stages of getting that out.

MJ: What kind of people attend the Houston Coffee Parties?

TI: It’s a really broad representation of the population, especially with regard to skills and trade. We have professors, teachers, federal employees, private business owners, a whole range of folks.

MJ: Cooperation and inclusiveness seem to be the key rules of engagement at the Coffee Party. When you see slogans of the Tea Party rallies that are racist, how do you deal with your anger?

TI: I grew up in conservative Texas. I have a lot of friends who identify with the Tea Party. I’m not going to turn off my friends, just because we have different views on policy. If we have some kind of a civil discourse, maybe we can get to know others’ views and perspectives, and get to understand one another on a human level. At the end of the day, I am more of a Martin Luther and Gandhi type of person. If I react to you with the same hatred, then all we do is compound this negativity. But if I react to you in a more positive way, you might come to my level. What I always tell the members of the Coffee Party is that we are more interested in establishing the community than worrying about what the Tea Party is doing. In order for our group to be strong, we have to establish who we are in the minds of other people, not waste energy on fighting the Tea Party. We want this to be a long-term movement, not just something short and reactionary.

MJ: How did other Coffee Party members react to Dale Robertson’s visit?

TI: There were some people who felt he was too vocal with his opinions. But they were able to stand their ground. Were they listening to each other? Definitely. People want to know what the other side is thinking and an opportunity to express their side. Even if a person made a stupid sign, doesn’t mean that the person isn’t approachable. You have to take it case by case. He [Robertson] changed the group dynamic because he allowed people to see that you could engage with somebody in the Tea Party without screaming and shouting.

MJ: What do you think will be the biggest challenge to keep the Coffee Party going?

TI: Getting the issue platform down. Not that top-heavy national platform, but something that has local and state issues on it. Something concrete people can work on.