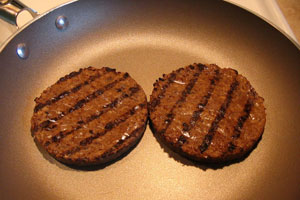 UPDATE: Veggie burger rumors are flying! Some readers and other news organizations have alleged that the study I wrote about on Monday was funded by the pro-meat, anti-soy group the Weston A. Price Foundation. But this morning, I spoke with Cornucopia Institute director Mark Kastel, who said that the Weston A. Price Foundation did not contribute any funding to the “Behind the Bean” (pdf) study. More here.

This is about the time of year when I start keeping packages of veggie burgers in the freezer, just in case of an impromptu barbecue. In the past, I haven’t had much fake meat brand loyalty: I’ve found that once I smother my hunk of textured vegetable protein in barbeque sauce, all soy patties are pretty much created equal. But after reading a recent investigation by the Cornucopia Institute, I’m going to be a lot more picky: The food and agriculture nonprofit found that most non-organic veggie burgers currently on the market are made with the chemical hexane, an EPA-registered air pollutant and neurotoxin.

In order to meet the demands of health-conscious consumers, manufacturers of soy-based fake meat like to make their products have as little fat as possible. The cheapest way to do this is by submerging soybeans in a bath of hexane to separate the oil from the protein. Says Cornucopia Institute senior researcher Charlotte Vallaeys, “If a non-organic product contains a soy protein isolate, soy protein concentrate, or texturized vegetable protein, you can be pretty sure it was made using soy beans that were made with hexane.”

If you’ve heard about hexane before, it was likely in the context of gasoline—the air pollutant is also a byproduct of gas refining. But in 2007, grain processors were responsible for two-thirds of our national hexane emissions. Hexane is hazardous in the factory, too: Workers who have been exposed to it have developed both skin and nervous system disorders. Troubling, then, that the FDA does not monitor or regulate hexane residue in foods. More worrisome still: According to the report, “Nearly every major ingredient in conventional soy-based infant formula is hexane extracted.”

The Cornucopia Institute found that a number of popular veggie burgers were made with hexane. The list (pdf, page 37, and below) is longer than you might think:

Boca Burgers “Made with organic soy”

Morningstar “Made with organic”

Got a burning question? Submit your econundrums to econundrums@motherjones.com. Get all your green questions answers by signing up for our weekly Econundrums newsletter here.