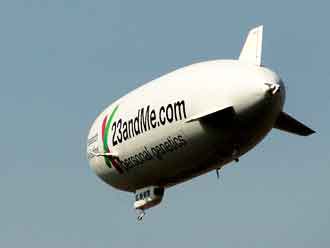 A congressional committee is looking closely at direct-to-consumer genetic tests of the sort that purportedly tell you your predisposition to various diseases and likely responses to drugs—and which you may have seen advertised on the sides of blimps and such. Indeed, 23andMe, which is partly owned by Google and markets its services via dirigible (among other platforms) is one of the three California personal-genomics firms now under federal scrutiny. (The others are Pathway Genomics and Navigenetics, Inc.)

Yesterday, Rep. Henry Waxman sent letters (download here) to the three firms on behalf of the House Committee on Energy and Commerce. The move was prompted by news reports that Pathway plans to sell its kits—previously unavailable from retail stores—at Walgreen’s, the nation’s largest drugstore chain. The companies have about two weeks to produce, among other things, the following:

All documents relating to the ability of your genetic testing products to accurately
identify consumer risk, including:
a. internal and external communications regarding the accuracy of your testing;
b. documents describing how your analysis of individual test results controls for
scientific factors such as age, race, gender, and geographic location;
c. third party communications validating the association between the scientific data
your company uses for analyzing test results and the consumer’s risk for each
condition, disease, drug response, or adverse reaction as identified by the results
of an individual test; and
d. documents relating to proficiency testing conducted by your clinical laboratories.

Sounds like the feds are finally catching on to the sorts of concerns MoJo contributor and medical writer Shannon Brownlee covered in our November/December 2009 issue. (See “Google’s Guinea Pigs.”) The gist was that most of these kits should be labeled with that timeless disclaimer “For Novelty Use Only” given how little they actually tell us about our health. Truly useful genetic associations with disease, as opposed to navel-gazing fodder, require that you conduct serious, clinically controlled testing of hundreds of thousands of people. Brownlee writes:

Knowing how genes affect people’s response to medicines could help drugmakers determine proper dosages. And tailoring products to patients with specific gene profiles may allow Big Pharma to revive once marginal drugs, extend patents, and reduce side effects—and thus lawsuits. Doctors can already use genes to determine, for example, which of their breast cancer patients will most likely benefit from the drug Herceptin.

But there’s a rub: It will be years, even decades, before this new research produces many tangible benefits. For the time being, SNPs [the DNA fragments most companies use as the basis for their testing] won’t tell you much. My 23andMe profile suggests I’m prone to having underweight babies. (My boy was nine pounds, six ounces.) I should have an average number of freckles. (I’m covered.) Blue eyes. (Bzzzt! Green.) Poor performance on nonverbal tests of intelligence. (I aced my SATs.) If science can’t get the trivial stuff right, why should I worry when a company says I have an elevated risk for heart disease or macular degeneration? My profile also says my SNPs should make me sensitive to the anti-clotting drug warfarin. What it can’t tell me is how my doctor is supposed to use this information. Should she not prescribe it, and leave me vulnerable to blood clots? Or give me a low, perhaps ineffective dose? The drug susceptibility info these companies provide is the roughest sort of guide.

In fact, for 23andMe, the tests themselves are a loss leader. Despite touchy-feely marketing that uses terms like “empowered” and “live strong,” the real business model isn’t about telling you your predisposition to Crohn’s disease and such. As Brownlee puts it:

The sales pitch obscures the true point of the tests, and even the fine print only hints at it. 23andMe wants customers to merge their genetic profiles with online personal health records like those Google has set up for people to track their medical information. Both Google and its cofounder Sergey Brin—who is married to 23andMe cofounder Anne Wojcicki and has a family history of Parkinson’s—are big investors in the firm; marrying their customer data would enable 23andMe to pair clients’ genetic data with their actual physical conditions. As it turns out, 23andMe’s long-term revenue model has little to do with selling kits and everything to do with selling customer information to drugmakers and others in need of human guinea pigs for clinical research. The company hinted at this in July by calling for people with specific diseases to take part in an in-house study for no pay, other than a $300 price break on a personal genetic profile. “We are the broker,” cofounder Linda Avey conceded to me in a recent interview. “We make the connection between [the drug firms] and the individuals.”

Brownlee, who subjected her own saliva to 23andMe’s contract labs for the story, had been apprehensive about doing so. Basically, she knew she would worry about the results—despite herself, since she knew they probably had little meaning:

As the consumer-genetics industry goes gangbusters, plenty more people may be sold on false hope or subjected to unnecessary worry. Armed with cursory knowledge, the sick may be inclined to blame their problems on their genes and continue living an unhealthy lifestyle. The healthy may join the “worried well,” who believe that staying healthy requires constant vigilance. (“Gene tests are intended for healthy people who want to do everything they can to stay that way,” notes a blurb for the Gensona tests, peddled by Amway.) That doesn’t sound much like empowerment. Come to think of it, the only thing I really want to know from my test is whether there’s a SNP that will make me indifferent to the results.Follow Michael Mechanic on Twitter.