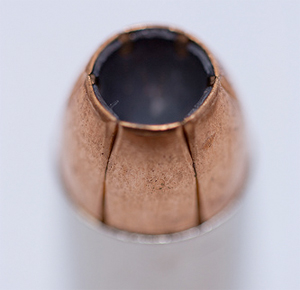 Army Times today highlights a quiet but notable decision by the Army’s top cop: Civilian and military police on US Army bases are now authorized to load their weapons with “jacketed hollow-point bullets.” These rounds—which are available for use by civilians in most US states but banned in international conflicts—feature a small depression cut into the slug’s nose, usually filled with notched steel. As Army Times puts it, these modifications enable the rounds to “deform and fragment upon striking a hard-tissue target. Mushrooming into a larger diameter, the rounds create a larger wound cavity.”

The reason for this policy shift? According to AT, the Army provost marshal general—Brig. General Colleen McGuire, the first woman to reach that post—issued the decision:

…after a gunman opened fire at the Pentagon in March and a deadly shooting spree at Fort Hood in November, and almost a year to the day after the fatal shootings at Camp Liberty, Iraq…The new policy, issued May 10, asserts installation police “require the tools necessary to secure our posts, camps, and stations from both internal and external active shooter threats.”

Hollow-point munitions are already highly favored by civilian law enforcement agencies, such as the New York Police Department, which switched to the ammo in 1998. While the damage these munitions do to their target is devastating, they’re also considered to be safer to bystanders, since their kinetic energy is lower, and they tend to lodge in whatever they hit directly, rather than passing through or ricocheting. (However, as Norman Siegel of the New York Civil Liberties Union asked in ’98: What about when an innocent bystander—or another police officer—is what the bullet hits directly?)

The ultimate irony here is that the Army will now arm itself against internal threats with a munition that’s illegal to use in war. The Hague Convention of 1899 bans any lawful combatant from using “bullets which expand or flatten easily in the human body, such as bullets with a hard envelope which does not entirely cover the core, or is pierced with incisions.” That is to say, steel-jacketed hollow-points.

(It’s also not obvious to me that hollow-point bullets would have made much difference when Sgt. John Russell killed five soldiers last May on Baghdad’s Camp Liberty, a few hundred yards from me. For one thing, he was unloading on occupants of the base’s combat stress control center—the one place on the military’s sprawling Victory Base Complex where all the soldiers were unarmed. For another, Russell was armed with an M-16, a rifle that fires slugs at higher velocities and effective ranges than any handgun. While it’s not impossible, taking down a rifle shooter with a pistol is tough and dangerous.)

But regardless of the practicalities and legalities, one thing is clear: The military is very concerned, perhaps with good reason, for the safety of its base workers. As they used to say when I was in uniform: Hope for the best; prepare for the worst.