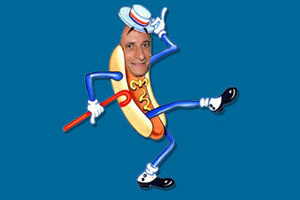 In a sign of just how much class the guy has, talk show host Glenn Beck has lashed out against Rep. Anthony Weiner (D-NY) by making fun of his name, in a campaign that drips with veiled anti-Semitism. Tuesday, the Jewish congressman had the gall to release an investigation into one of Beck’s biggest sponsors, Goldline International. The report claimed that the company has violated federal law by using misleading and deceptive practices to sell unwitting consumers overpriced gold coins. Weiner has asked both the FTC and the SEC to investigate. Since then, Beck has been on something of a rampage. Beck has accused Weiner of engaging in McCarthyism and conspiring with the Obama administration to shut him down. And on Wednesday during his radio show, Beck asked his listeners to send in doctored photos of the congressman showing him with “his nose as a wiener.” He said he welcomed any “Weiner facts” or photos of the congressman “in front of the wienermobile in front of his house, with his wiener dog, with his little wiener children.” (Media Matters has the clip here.) Submissions could be sent to a new website Beck just set up, www.weinerfacts.com, which seems to have crashed almost immediately after he called for the photos.

Goldline is one of the few companies that still sponsor Beck’s shows after most of the mainstream advertisers fled in the wake of his suggestion last year that President Obama was a racist, and Beck seems intent on protecting his sponsor regardless of how many of his listeners say they were ripped off by the company. But as a Mother Jones investigation also shows, Goldline has generated a host of complaints to the FTC about its business practices that indicate it was only a matter of time before the company ended up going the way of many of Beck’s other sponsors: in trouble with the government.

Just last week, in fact, the Texas attorney general announced that he was charging TaxMasters, another Beck sponsor, with multiple violations of the Texas consumer protection and debt collection statutes. From the AG’s press release:

In the midst of a national economic downturn, TaxMasters used a nationwide marketing campaign to offer services for distressed taxpayers who needed help dealing with the IRS,” Attorney General Abbott said. “A state investigation and nearly 1,000 customer complaints indicate that the defendants routinely misled customers about the nature of their tax resolution service agreements – and worse, attempted to enforce those improper agreements through unlawful debt collection tactics. The state’s enforcement action seeks to prohibit the defendants from continuing to violate the law and seeks restitution for the financially struggling taxpayers who were harmed by the defendants’ unlawful conduct….

TaxMasters’ advertisements encourage taxpayers to call its toll-free number for a “free consultation” with a “tax consultant.” Court documents filed by the state indicate that callers are not connected to an employee qualified to give tax advice, but rather with a TaxMasters salesperson who recommends a “solution” for between $1,500 and $9,000 or more.

According to court documents, many callers were offered an installment plan so that they could pay the defendants’ fee over a specified period of time. However, callers who asked to see written terms and conditions prior to making a payment were informed that a credit card or bank account number is necessary to generate a written TaxMasters service contract. As a result, TaxMasters customers were unaware – and the defendants’ personnel did not have a practice of disclosing – multiple aspects of the TaxMasters service agreement that were harmful to taxpayers.

At this point, you have to really wonder: Which of Beck’s advertisers aren‘t running some kind of scam?