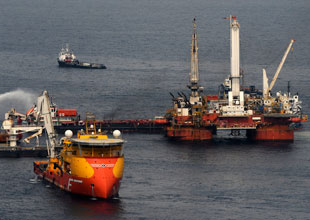 UPDATE 7:08 PM SATURDAY: BP and the Coast Guard announced that they have stopped the top-kill procedure in a press conference Saturday evening, the 40th day of the Gulf disaster. “We have been unable to overcome the flow from the well,” said BP chief operating officer Doug Suttles. “We now believe it is time to move on to the next of our options.”

Suttles said the top-kill, which BP had given an estimated 60 to 70 percent chance of success, had failed. “We’ve given this every chance to succeed,” he said.

He acknowledged the growing frustration, and fear, as the top-kill had been painted as the best hope, short of waiting at least three months for a relief well to be drilled. “This scares everybody, the fact that we can’t make this well stop flowing, the fact that we haven’t succeeded so far,” said Suttles.

The next option is what they’re calling the “Lower Marine Riser Package,” or LMRP, which would use robotic devices to cut off the broken riser at the top of the blowout preventer, cap the opening, and insert a new riser. The new riser would be used to pump the oil and gas to a ship on the surface (here’s a graphic explaining the process that BP released). But Suttles warned that this is as untested as previous efforts to cap the well: “No one’s ever done anything like this that I know of.”

With this new attempt, Suttles said there “clearly is a risk it won’t work.” Pressed by a reporter about the odds this would succeed at controlling the well, Suttles said, “We do have a lot of confidence, but I’m not going to quote a number.”

Coast Guard Rear Admiral Mary Landry said that it will take four to seven days to know if this next attempt works. “We’re all on a roller coaster ride here,” said Landry.

After indicating on Thursday that the top-kill effort was working, then pausing the operation, then resuming it and indicating that it was going as planned on Friday, BP now says that the amount of oil spewing from the well hasn’t changed, and there is no guarantee that the procedure is actually working.

“I don’t think the amount of oil coming out has changed,” BP chief operating officer Doug Suttles said on Saturday. “Just by watching it, we don’t believe it’s changed.”

BP, the Coast Guard, and federal officials are holding a press conference at 5 pm EST today. The Times-Picayune reports that, according to sources, there they will officially announce that the operation has failed and the company is setting to work on other plans:

BP is expected to announce that it will move on to its next option, known as LMRP. The procedure involves cutting off the failed, leaking riser at the top of the Lower Marine Riser Package on the blowout preventer to get a clean-cut surface on the pipe.

Then the company will install a cap with a sealing grommet that would be connected to a new riser from the Discoverer Enterprise drillship, with the hopes of capturing most of the oil and gas flowing from the well.

I’ll have more after the press conference. [SEE UPDATE AT TOP OF POST.]