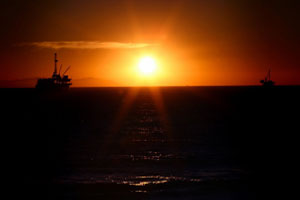 With the Deepwater Horizon oil spill shaping up to be a calamity of historic proportions, Sen. Bill Nelson (D-Fla.) on Tuesday slammed the Interior Department division responsible for regulating domestic oil development, calling for an investigation into the infamously problem-plagued Minerals Management Service—and asking what the Obama administration is doing to clean it up.

The disaster in the Gulf has once again cast a spotlight on MMS, a troubled division with a long history of regulatory negligence. Conservatives have dubbed the spill “Obama’s Katrina.” But the roots of the disaster, which could potentially have been prevented by enhanced safety measures, stretch back to the George W. Bush years. During that era, Interior became a revolving door haven for industry lobbyists. MMS developed a hands-off approach to regulation and was known for its deference to the companies it was supposed to be policing.

For instance, take its 2003 decision not to require offshore rigs to install what’s known as an acoustic switch, a remote-controlled backup system that seals off an underwater well even if the rig above is destroyed. Both Norway and Brazil mandate this precaution for rigs off their coasts, and MMS considered doing the same. But oil companies complained bitterly that the $500,000 devices were too expensive and not effective enough, and MMS ultimately made installing the switches voluntary. Not surprisingly, the Deepwater rig wasn’t equipped with one.

Documents also surfaced this week indicating that as far back as 2004, MMS knew that a key piece of oil-drilling safety equipment used on the Deepwater Horizon did not function adequately in deep waters, like those in the Gulf. Yet the agency issued no new regulations to address the problem. Additionally, one possible cause of the Deepwater disaster was inadequate cementing in the well—and MMS has long been aware of concerns about the cement used in Gulf wells. In a 2007 report, it noted that “blowouts” caused by poorly constructed well casings had increased in recent years. (MMS has been working with the American Petroleum Institute, the oil industry lobby, to develop new standards for “best cementing practices,” but has yet to issue new rules.)

Last year, MMS signed off on BP‘s exploration plan and environmental impact statement for the Deepwater site, which analyzed worst-case scenarios should an accident occur on the rig. The 52-page plan, filed with MMS in February 2009, noted that it was “unlikely that an accidental surface or subsurface oil spill would occur from the proposed activities.” MMS even certified that the company had “the capacity to respond, to the maximum extent practicable, to a worst-case discharge, or a substantial threat of such a discharge.” It has recently become clear that BP and MMS woefully underestimated both the magnitude of a worst-case spill and the company’s ability to respond. (BP has blamed the spill on a failure of the rig’s “blowout preventer,” a valve that was supposed to seal the well in the event of a blast. The company’s CEO, Tony Hayward, says that this kind of failure was “unprecedented,” yet MMS has for years documented substantial problems with blowout preventers.)

“What you see in this current disaster is that MMS was an agency that was cozy with industry and trusted their assurances that they could contain this kind of disaster, but because they didn’t verify industry’s claims, we’ve seen that neither of them were adequately prepared,” says Mandy Smithberger, an investigator with the Project on Government Oversight.

Environmental advocates say the Obama administration has made significant strides in improving MMS, including by appointing Elizabeth Birnbaum, a former official with the conservation group American Rivers, to run the division. Friends of the Earth president Erich Pica says he has “a lot of respect” for Birnbaum, but notes that MMS still has a long way to go. “This agency is one that requires a transformational makeover,” he says.

The industry, for instance, still seems to hold significant sway over the division’s decision-making. Last year, when the MMS proposed new mandatory environmental planning procedures, BP and other oil companies pushed back hard. The new regulations would force rig operators to implement a “Safety and Environmental Management System”; in a September 2009 letter to the MMS, Richard Morrison, the head of BP’s Gulf of Mexico operations, strongly criticized the proposed measures. “We believe the industry’s current safety and environmental statistics demonstrate that the voluntary programs…have been and continue to be very successful,” he wrote. Nearly 11 months after proposing the rule, the agency has yet to finalize it. (MMS did not return calls for comment on the status of the regulations.)

MMS, says Pica, “needs to develop a backbone to stand up against big oil companies.”

A litany of other problems at MMS have been documented by government investigators over the years, including repeated failures in inspecting federal leases and collecting royalties, as a recent Government Accountability Office report documented, which may have caused the loss of tens of millions in federal revenues. The GAO last month concluded that the MMS office in Alaska failed to complete an adequate environmental analysis on new drilling sites at the behest of an industry group. Questions have also been raised since the explosion about MMS’ oversight of other BP operations in the Gulf and enforcement when safety violations have been identified. When the Houston Chronicle reviewed accident inspection and enforcement records, it found that inspectors reported potential safety violations in five out of 20 accident investigations involving BP operations since 2005—yet only one of those violations resulted in a fine.

The recent disaster has prompted closer scrutiny of BP (the rig’s operator), Transocean (its owner), and Halliburton, which poured the cement for the Deepwater well. Executives from the companies have been called to testify before a congressional panel next week. But now lawmakers are also demanding a closer examination of the MMS and its role in the Deepwater accident. In addition to Nelson’s call for an investigation, Rep. Darrell Issa (R-Calif.), the ranking member of the House oversight committee, has requested a probe into whether proper safety regulations were in place. He also wants to know whether MMS “improperly awarded safety certifications to BP, Transocean, and the Deepwater Horizon rig.”

Scheduled for Monday, the division’s annual SAFE awards ceremony, honoring the safety achievements of offshore drilling companies, arrived at a particularly inopportune time for the MMS. Ultimately, Interior officials opted to postpone it. That was probably wise. After all, one of its 2009 award recipients was Deepwater Horizon-owner Transocean. BP, meanwhile, was in the running for a 2010 safety commendation.