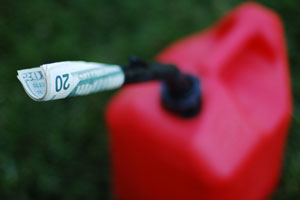 Oil giant BP may be overwhelmed with the clean-up from the collapse of its Deepwater oil rig in the Gulf of Mexico. But the corporation has still found time to fight tougher financial reforms on Capitol Hill. The corporation is a member of the Coalition for Derivatives End-Users, a collection of companies actively pushing for a loophole in new regulations governing derivatives, the complex and opaque products used to hedge risk and bet on fluctuations in the financial markets. Derivatives, experts say, exacerbated the 2008 financial crisis, and lawmakers and the White House have sought to drag that market into the sunlight. The financial reform legislation now in Congress, says President Obama, will “close the loopholes that allowed derivatives deals so large and risky they could threaten our entire economy.”

Not if BP has its way. The corporation, along with the US Chamber of Commerce, Business Roundtable, and other large advocacy groups, wants to ensure that it is exempted from a new provision in derivatives regulation that would increase transparency and make derivatives trading less risky. (BP did not respond to a request for comment.)

First, a primer on the derivatives regulation on the table. The House and Senate bills would mandate that derivatives be traded on an exchange, just as stocks are. This would mean that information on the structure, volume, and pricing of derivatives deals are out in the open. If you’re an airline trying to hedge against the fluctuations in the cost of jet fuel, you’d be able to look at what your competitors paid and get the same kind of deal—not pay an amount devised by a Wall Street broker looking to make a killing. “Transparency brings better pricing and lowers risk for all parties to a derivatives transaction,” says Gary Gensler, chairman of the Commodity Futures Trading Commission.

But what’s got BP upset is a proposal to force derivatives to go through a clearinghouse, a central body that would act as a middleman on each trade, collect data, and help protect failed derivatives deals from leading to massive losses that harm the wider economy. The clearinghouse would do so by requiring companies in a trade to put forward money or other collateral in case those trades went wrong. This, lawmakers and finance experts say, is crucial: Without this middleman ensuring everyone can deliver on their bets, the likely result is another AIG-like meltdown, when a company enters into so many trades that it can’t afford to cover them all if they all fail.

BP doesn’t want to front up cash or collateral when it trades in derivatives. “These additional costs will impact the ability of these companies to meet their financial obligations, threaten needed job creation, and significantly weaken the ability of American companies to compete globally,” the Coalition for Derivatives End-Users wrote in a April 28, 2010, letter urging Congress to include an exemption for end-users, the non-financial companies that use derivatives as part of their business practices of hedging risk. (The letter was signed by the American Petroleum Institute, of which BP America is a member.) In addition to its membership in the end-users coalition, BP America hired the Podesta Group, a powerful Washington firm, to lobby this year on derivatives and other financial reform issues on Capitol Hill, according to the Center for Responsive Politics.

According to the Congressional Research Service (CRS), an end-user exemption could undercut derivatives legislation as a whole. A December 2009 CRS report stated, “Nearly two-thirds of OTC derivatives involve an end user. If all end users are exempted from the requirement that OTC swaps be cleared, the market structure problems raised by AIG still remain.” Financial reform advocates charged BP with lobbying to defeat vital reform. “We think the idea of an end-user exemption is just unacceptable in terms of creating more transparency in the system,” says Lauren Weiner with Americans for Financial Reform. “Anyone who’s pushing for those opt-out provisions should take a close look at the really positive benefits of putting these trades in the sunlight.”

BP’s efforts, however, have partly paid off. In the House’s financial reform legislation, BP, via the end-user coalition, sent letters to every member of Congress lobbying for an exemption—which it ultimately won. BP claimed that because it isn’t heavily involved in derivatives trading, it shouldn’t be affected by the bill, says a spokeswoman for the Senate agriculture committee, Courtney Rowe.

On the Senate side, Rowe added, BP wouldn’t get its way. Sen. Blanche Lincoln (D-Ark.), the architect of the Senate’s tough derivatives proposals, has rejected BP’s claims and others like it, and has fought against loopholes in new derivatives rules. “Senator Lincoln felt that regardless of the amount of swap dealing you do,” Rowe wrote in an email to Mother Jones, “if you’re a swap dealer you should be regulated as one.”