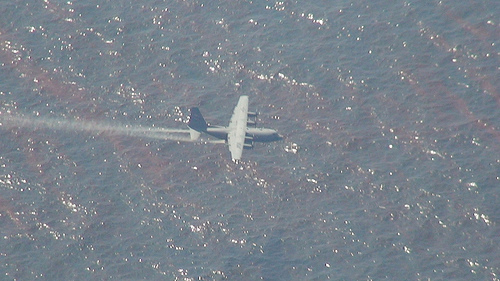 Several independent teams of scientists monitoring the impacts of the Gulf oil spill have found huge plumes of undersea oil extending miles from the spill site. A first team of scientists reported a plume two weeks ago and last week teams identified two separate plumes extending in opposite directions. One plume is estimated to be 22 miles long, six miles wide and more than a thousand feet deep, made up of globules of oil of varying sizes.

How has BP CEO Tony Hayward responded to these findings? Seems he’s decided to go the denial route. “The oil is on the surface,” Hayward said. “There aren’t any plumes.” The company’s own tests, he said, have found “no evidence” of such plumes.

This is, of course, the guy who for weeks argued that the spill was “tiny” compared to the “very big ocean.” Last Friday he finally acknowledged that this is “clearly an environmental catastrophe.” But now he’s set to work to convince the public that the oil, which the company has tried so hard to keep below the water, doesn’t exist if we can’t see it on the surface.

The existence of the plumes is a new phenomenon; oil generally floats to the surface, given its natural buoyancy. But some of the scientists believe that the record volume of dispersants used at this site is keeping the majority of oil under the surface and causing it to form these plumes. That’s what dispersants are designed to do—break up the oil into smaller globs so it sinks and can biodegrade more rapidly. As of Monday, a total of 920,000 gallons of dispersant have been used on the spill—720,000 on the surface and 200,000 at the spill site. Critics of dispersant use note that while the chemicals solve the problem of oil hitting land, they keep it under the water, where it’s less of a PR issue for the oil company but still creates its own set of environmental problems.

Rep. Ed Markey (D-Mass.) on Monday sent a letter to BP America president Lamar McKay asking for more information about BP’s plume denial. The letter requests “copies of all measurements, calculations or other supporting materials on which Mr. Hayward based his statements regarding the existence of sub-surface plumes of oil (including indications of BP’s methodology or any observational equipment used).”

BP has shown it can’t be trusted to give an accurate estimate of the spill size. Now it looks like the company doesn’t plan to be honest about where all that oil is going, either.