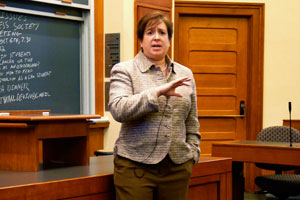 It’s her hair, right? Or perhaps her stout physique? It’s hard to pin it down exactly, but there is something about Obama’s latest Supreme Court pick that has made the “alleged lesbian” label stick, despite unambiguous statements from the administration that Elena Kagan is most definitely straight.

Monday, after the news leaked about Kagan’s nomination, religious conservative groups took to the Internets with multiple calls for Kagan to out herself. Gordon James Klingenschmitt, a court-martialed military chaplain who now runs an anti-gay website, circulated a press release citing anonymous student reviews on Epinions as proof that Kagan is gay. Peter LaBarbera at Americans for Truth About Homosexuality blasted out a press release calling on Kagan to answer the question: “Are (or were) you a practicing homosexual?” He wrote, “in an era of ubiquitous pro-gay messages and pop culture celebration of homosexuality, it’s ridiculous that Americans should be left guessing as to whether a Supreme Court nominee has a special, personal interest in homosexuality. Given the important homosexual-related issues coming before the Supreme Court, Kagan should say so if she has a personal interest in lesbianism.”

But it wasn’t just homophobic right-wingers calling on Kagan to address her sexual orientation directly. Atlantic blogger Andrew Sullivan spent a good part of the day suggesting that the administration is defending the closet by not answering questions about Kagan’s sexuality, and then defending his suggestion that Kagan come out. Sullivan, who’s openly gay, wrote, “Is Obama actually going to use a Supreme Court nominee to advance the cause of the closet (as well as kill any court imposition of marriage equality)? And can we have a clear, factual statement as to the truth? In a free society in the 21st Century, it is not illegitimate to ask. And it is cowardly not to tell.”

The weird thing about all of this was astutely pointed out by one of Sullivan’s commenters, who noted that the ever cautious, drama-free Obama would be uncharacteristically stupid to lie about something so easily discoverable as whom Kagan has slept with. Just ask John Edwards how hard it is to keep secret relationships secret in the era of 24/7 celebrity coverage. Besides, if Obama really wanted to make a statement and nominate a gay or lesbian Supreme Court justice, wouldn’t he have done so openly?

Nonetheless, even sane, smart people like Sullivan seem to believe pretty strongly that Kagan—and by extension, Obama—is hiding something. Buried in the many debates over whether it’s even appropriate to consider someone’s sexual orientation as part of the confirmation process is the unspoken acknowledgement that Kagan must, after all, be gay. Which is sad, because for all the pundit chatter about how a woman landing a Supreme Court gig demonstrates the great strides women have made in the workplace, the Kagan-is-a-lesbian meme suggests that there is still hostility directed at powerful women who dare tread in a man’s world. Kagan’s confirmation would elevate the number of sitting female Supreme Court justices to a record of—gasp!—three, but the legal world is still very much a sausage fest. The women who succeed in breaking into those clubby confines and thriving there don’t do it by acting like ladies; ergo, the argument goes, they must be lesbians.

There’s not much else to explain the persistence of the rumors about Kagan. After all, here’s a woman who has been in the public sector for most of her career. Kagan endured a grueling confirmation hearing before the US Senate a year ago, one that took place with the unspoken understanding that she was a contender for the high court. Harvard Law, where she was dean, isn’t exactly a warm, fuzzy place where everyone holds hands and sings “Kumbaya.” It’s populated by people who litigate as a hobby, and who in all likelihood would have outed Kagan long ago if it served their purposes. But most telling: There is absolutely no public evidence that she has ever had a same-sex relationship. No jilted lovers have told all to the Enquirer. The total sum of the evidence lies in the postings of four anonymous students (or alleged students) on Epinions. Overall, the case for her gayness seems to rest on a pretty thin argument that goes something like this:

That’s it. You could make a better case that Kagan is simply a celibate workaholic, given the paucity of information that’s leaked out about her personal life thus far.

Similar whisper campaigns swirled briefly around Justice Sonia Sotomayor when she was nominated last summer. Like Kagan, Sotomayor was also single and childless. But Sotomayor had a few things going for her to help quash the rumors. For one, she had once been married to her high school sweetheart. But she also had the rather embarrassing experience of appearing before the Senate Judiciary Committee during her 1997 confirmation hearing for a spot on the 2nd Circuit and gushing profusely about Peter White, whom she introduced as her fiancé. She was reportedly devastated when the relationship fizzled.

But really, what powerful woman in Washington hasn’t been accused of being a lesbian? Condoleezza Rice, Harriet Miers, Janet Napolitano, Janet Reno—they’ve all at one time or another been the victim of whisper campaigns about their sexuality. And of course there’s Hillary Clinton. Wingnuts have been accusing the Secretary of State of secretly lusting after women for decades now.

Surely, men haven’t entirely been spared such campaigns. The reclusive, lifelong bachelor, retired Justice David Souter has often been the subject of speculation, but he was lucky enough to be nominated before the advent of the Drudge Report. And for years rumors have dogged Sen. Lindsey Graham (R-S.C.), who serves on the Judiciary Committee that will be vetting Kagan.

Gossiping about the sexuality of Washington powerbrokers has become sort of a national pastime. But the stakes—and the vitriol—seem to go up substantially when powerful women crash the beltway frat party. And while Sullivan might think that sexual orientation has become as bland a biographical detail as Jewishness, the unfortunate truth is that, unlike him, most of those suggesting Kagan has something to hide aren’t rooting for her to come out so she can advance the cause of gay rights. They just want to knock a powerful woman down a few notches.

UPDATE: Kagan’s friends tell Politico that she is not gay.