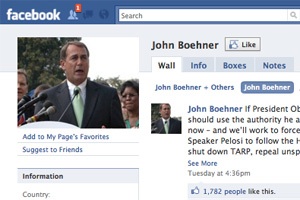 Who’s winning the social media war on Capitol Hill? The Republicans—and they are slaughtering the Democrats. Here’s but one example: House Minority Leader John Boehner has 75,443 Facebook fans and Majority Leader Nancy Pelosi has 20,445. (And the “Impeach Pelosi” Facebook page has more than 80,000.)

It wasn’t so long ago that Republican tech savvy was the butt of jokes. Remember George W. Bush’s references to “the Internets“; former GOP senator Ted Stevens’ theory that the World Wide Web is a “series of tubes“; and presidential candidate Sen. John McCain’s (R-Ariz.) admission that he didn’t how to use a computer? But while President Barack Obama won kudos for his social-media outreach during the 2008 campaign, that online know-how doesn’t seem to have reached the Democratic ranks of Congress. When it comes to employing Facebook, YouTube, Twitter, and other social-media sites, Republicans are whipping their opponents across the aisle, creating a growing tech gulf that threatens important implications for the 2010 mid-term elections.

Boehner, for instance, has 42,967 Twitter followers. And Pelosi? Well, she can’t have any followers, because she doesn’t tweet. Patrick Bell, the director of new media for House Republican Conference vice chairwoman Cathy McMorris Rodgers, keeps close tabs on what the Dems are up to. He says that as of January 2010, only 34 percent of Democratic House members were on Facebook and only 20 percent had hit Twitter. Meanwhile, since January 2009, the percentage of House Republicans using Facebook has jumped from 37 percent to 79 percent (as of early April). Sixty-four percent of these GOPers are on Twitter, compared with 28 percent in January last year. And 89 percent now have a YouTube channel, compared with 56 percent last year.

Rodgers bragged about the Republican tech dominance during a conference call on Wednesday with bloggers and the GOP House members leading the new America Speaking Out project, which is using crowd-sourcing to help the party draft a new agenda to drive the 2010 midterm elections. Many of the early contributions were from critics who posted suggestions parodying Republican policy preferences, but serious ideas are starting to rise to the top.

Another initiative to get more members virtually engaged appears to have succeeded wildly. In April, Rodgers launched a six-week contest organized like a “March Madness” ladder that was designed to nudge members of Congress into the Twittersphere. It seems to have succeeded wildly. This “new media challenge” is about to come to an end this week, as Rep. John Fleming (R-La.) and Rep. Phil Gingrey (R-Ga.) duke it out for championship title as the House member with the most increased social media use. (The winner will be announced after the Memorial Day break—on Twitter, naturally.)

Members of Congress have been a little slow to embrace the new media tools, which may not be much of a surprise, given that recently one senator admitted he had never used an ATM. But age and technophobia aren’t the only reasons that many elected officials have been late tweeters. Congressional administrative rules have made the transition difficult. Until recently, members weren’t allowed to create Facebook pages because of concern that they might be promoting commercial interests in joining the ad-supported site.

But Bell says Facebook created a special ad-free page for elected officials that allowed members to friend away. And Republicans have done just that. Bell credits much of the success to a push by his boss and others in the Republican New Media Caucus to get members to use the new Internet tools to go beyond disseminating press releases to actually engaging with the public. A year ago, Bell says, most congressional tweets were of the “I’ll be on Fox at 5” variety. Today, though, the GOP Twitter feed is more likely to solicit feedback from followers along the lines of “What did you think of my 5 o’clock Fox appearance?

Some GOP members have quickly adapted to the format. Rep. John Shimkus (R-Ill.) has become moderately famous for his daily Bible tweets. (Sample: “1 Corinthians 13:13 For now we see through a glass, darkly; but then face to face: now I know in part; then shall I know as also I am known.”) Rep. Peter Roskam (R-Ill.), co-chair of the America Speaking Out project, has earned a loyal following for his daily Lost commentary. (“Still talking about the end! Tempted to watch it again from the beginning to look for the foresadowing [sic] clues. Great closing! #lost”) And contest finalist Fleming posted Facebook dispatches from a military mission about how the European ash-cloud crisis was affecting the flights of soldiers returning from overseas. Whether these members are tweeting about cult TV shows or Scripture, such engagement connects with people and can only help when it comes to attracting supporters and voters.

Bell says that this social media push has resulted in Facebook traffic surpassing House members’ official government websites. Perhaps more important, though, he notes that when it comes to virtual outreach and engagement, “We’re getting to the point where we’ve leapfrogged the majority party.” With 2010 shaping up as a potentially tough year for the Democrats, they can ill afford to be out-tweeted.