Rand Paul was in high libertarian form last night on Rachael Maddow, where he refused to endorse some parts of the Civil Rights Act of 1964 because big government has no right to make private lunch counters take down those “Whites Only” signs. That doesn’t make Paul a racist, says Ezra Klein, but rather a slightly less disturbing “ideological extremist,” someone comfortable standing by his small government ideals even when he comes off as an asshole. Klein’s willingness to give Paul the benefit of the doubt might be justified–if not for Rand and Ron Paul’s ever-growing list of associations with the kind of people who like to wear pointy white hats.

Let’s start with the 2008 presidential bid of Ron Paul, Rand’s father. Early on, Paul took heat for refusing to return a $500 donation from well-known white supremacist Don Black. A few months later, the New Republic‘s James Kirchick exposed the bigoted content of dozens of unbylined newsletters published under Paul’s name starting in the 1970s. Paul accepted “moral responsibilty” for the newsletters but denied knowing about their content. Still, many reporters gave him a pass. How could a self-proclaimed fan of Martin Luther King be a bigot?

Flash forward to the early days of Rand Paul 2010. Back in December, before the MSM was paying much attention to the campaign, a Kentucky blogger exposed Paul spokesman Chris Hightower’s unusual taste in fashion. On his MySpace page, Hightower had written:

So, I was in Rivergate Mall today in line to get some pizza and I noticed a group of Afro-Americans were looking at me with hate and whispering stuff. I was wondering WTF and procceeded to sit facing them and give them the “what the fuck are you looking at look”. Anyway after a few snarls they quit looking at me. I was like do these fuckers think I am someone else or what? Anyway I finished my food and went to find some new shoes. About 10 minutes later, another group of Afro-Americans are giving me the same looks, it then dawns on me, there has to be something on this hoodie that is pissing off the Afro-Americans. And sure enough when I get outside the mall I look and bingo. KKK …. LOL!

He also left this post from a friend up on his wall for more than two years: 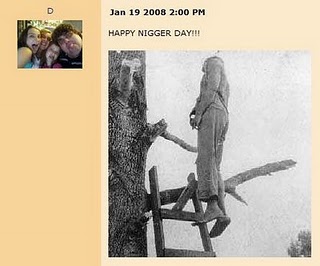 Rand Paul eventually fired Hightower over the affair. Still, the ties between the Pauls and racists may now seem a bit too cozy for comfort. It’s one thing to espouse a governing philisophy that just happens to appeal to shiny-headed cape wearers. It’s another thing entirely to let them speak for you, maybe accidentally, or maybe not, but nonetheless over and over again.

UPDATE: This afternoon, Paul reversed himself, saying he now believes the federal government should have the power to prevent private businesses from discriminating based on race. H/T to TPM’s Justin Elliott.