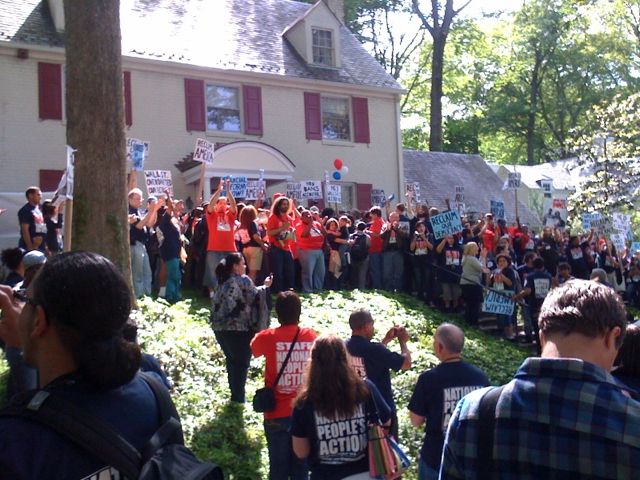 Demonstrators occupy the front lawn at the house of Gregory Baer, a top lobbyist for Bank of America. Photo by Andy Kroll.

Late Sunday afternoon, the well-heeled residents of Chevy Chase, Maryland, a bucolic suburb northwest of Washington, DC, witnessed a commotion rare for their neighborhood. Toting signs and megaphones, fired up and chanting at the top of their lungs, some 700 demonstrators from around the nation paid a visit to two residents who work as powerful lobbyists for the United States’ biggest banks: Gregory Baer, a deputy counsel for Bank of America, and Peter Scher, a high-ranking executive and lobbyist for JPMorgan Chase.

Bussed into Washington by the Service International Employees Union (SEIU) and National People’s Action (NPA), a community organzing network, the protesters visited Baer’s and Scher’s homes as part of a multi-day stand in Washington. On Monday, SEIU and NPA will lead a series of protests on K Street in Washington—a street synonymous with influence and lobbying. The groups are pushing for strong new financial reforms (as teh Senate continues debating legislation to bolster the rules governing Wall Street) and urging banks to stop foreclosures and to promote job creation.

But before Main Street arrives on K Street, a fleet of yellow school buses and motor coaches delivered the demonstrators, clad in red, blue, and purple t-shirts, to a park in Chevy Chase near the home of Bank of America’s Baer. After a quick briefing, the throngs of protesters, hailing from Chicago, San Francisco, Staten Island, and other locales, gathered on Baer’s front lawn and marched to his front door. Members of NPA delivered a letter to a family member who opened the door. Baer, this family member said, wasn’t home. The letter, addressed to Bank of America CEO Brian Moynihan, asks Moynihan to meet with groups “to address the critical problems facing our neighborhoods and our country—problems that were caused in part by Bank of America and that continue to fester due to Bank of America’s inaction.”

Here’s a video, courtesy of National People’s Action, of the scene at Baer’s home:

Undeterred by Baer’s absence, the boisterous group chanted—”Bank of America, Bad for America,” “Take It Back,” “Fired Up, Can’t Take It No More”—and, via megaphone, blasted Bank of America for foreclosing on homeowners and lobbying against financial reform. One woman who took the mic explained how she’d called Bank of America dozens of times to fight off foreclosure but hadn’t had any success with the bank’s unresponsive and unhelpful employees. People in the crowd booed references to the bank. Many hoisted signs that read, “People First Economy””and “Hold Wall Street Accountable.”

Just as the crowd was about to leave around 4:15 pm, Baer, in a baseball cap and shorts, strode up his front lawn and into the crowd. Baer briefly spoke with one of the protest’s organizers, declined to say much at all, then ducked into his house. The crowd hung around Baer’s house for another 25 minutes, their chants drawing curious (and agitated) neighbors onto their porches. Then they left for their second stop of the day. 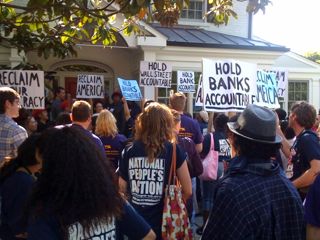 Protesters crowd in front of JPMorgan Chase lobbyist Peter Scher’s house in Chevy Chase, Md. Photo by Andy Kroll.A 15-minute ride later, the buses arrived at the stately home of JPMorgan lobbyist Peter Scher. Like the previous demonstration, people poured out of the buses and quickly filed onto the neatly manicured front lawn and rushed Scher’s red front door. This time, no one answered, despite repeated demands by the Rev. Eugene Barnes from Illinois People’s Action. At Scher’s house, Montgomery County police nudged protesters off the lawn onto a nearby street, where the speeches and chanting and banging of drums continued. (One of the officers said the event was “very peaceful.”)

A handful of protesters walked to neighboring houses and handed fliers criticizing Scher and JPMorgan to neighbors watching the scene. On the street, Mark Freeman, a Minneapolis resident and lifelong union member, told of battling Bank of America, which was attempting to foreclose on his modest home in north Minneapolis. “It’s time that we repossess America,” Freeman shouted into the megaphone.

As the sun sank lower in the sky, the activists returned to the buses and headed to their hotels. On Monday, their target is a more obvious one: K Street, the Rodeo Drive of Washington lobbying shops, where they will protest Wall Street’s influence-peddlers’ attempts to whittle down financial reform.