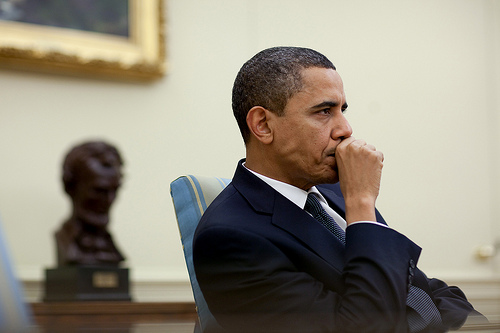 President Barack Obama faced tough questions from the press on Thursday about the administration’s response to the oil spill in the Gulf of Mexico. And in a press conference that lasted for more than an hour, he attempted to strike a delicate balance between defending the administration’s response, blaming BP, and asserting that the federal government has taken the lead in the response effort.

“The day the rig collapsed and fell to the bottom of the ocean, I had my team in the Oval Office that first day,” said Obama. “Those who think we were slow on our response or lacked urgency don’t know the facts.”

But after repeated questions from reporters which highlighted the public’s frustration with the administration’s handling of the disaster, Obama was more conciliatory. “I take responsibility,” he said. “It is my job to make sure everything is done to shut this down.”

The president did admit that on at least one front—forcing BP to release video and other information related to the spill—the government’s response had been sluggish. “The administration pushed them to release it, but they should have pushed them sooner,” he said. “There was a lag of several weeks that I think shouldn’t have happened.”

Obama’s admission came on the day—five weeks since the explosion—that the administration released a new estimate of the spill that was two to five times higher than the earlier assessment.

Obama also announced new plans on offshore development intended to quell concerns about other drilling activities in the wake of the Gulf disaster. He extended all new drilling operations for six months or until a commission that he announced last week to study the question completes its report. He suspended planned exploration in the Arctic that was to begin in July and a proposed lease sale off the Virginia coast. Operations at 33 deep-water rigs in the Gulf are also on hold until further evaluation of their safety and planning can be done. The president also took aim at the “cozy and sometimes corrupt relationship” between the industry and the government agencies intended to regulate it.

This walk-back from offshore drilling also prompted some probing questions from reporters. Pressed on whether he regrets his March 31 announcement of a major expansion of offshore drilling, Obama held firm. “I believe what I said at that time, which was that domestic oil production is an important part of our overall energy mix,” he said. “It has to be part of our overall energy strategy.” He pushed the blame back on oil companies. “Where I was wrong was in the belief that the oil companies had their acts together when it came to worst-case-scenario,” he said.

Obama also emphasized that the spill highlights the need for Congress to pass a broader climate and energy agenda—which was at least part of the reason drilling was offered as an olive branch to moderates in the first place. “If nothing else this disaster should serve as a wake up call that it’s time to move forward with this legislation,” he said.

(If you appreciate our BP spill coverage, please consider making a tax-deductible donation in support.)