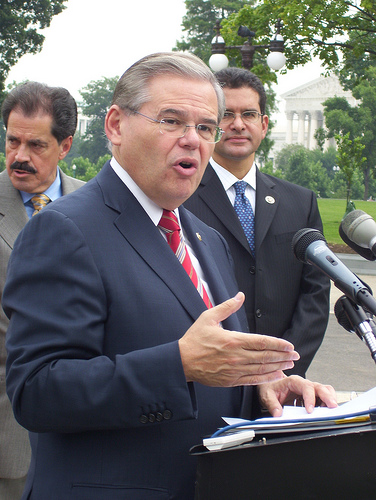 The Obama administration has made it very clear that it intends to force BP to pay all of the costs associated with the massive spill in the Gulf of Mexico. But that might be easier said than done, thanks to a law passed by Congress in the aftermath of the Exxon Valdez spill that puts a $75 million cap on liability for spills.

The costs associated with the Deepwater Horizon spill are numerous. BP is already spending $6 million a day on clean-up efforts. The government is  expending millions as the Coast Guard and numerous state and federal agencies rush to provide back-up. The spill has halted local fishing, an industry that brings in $41 billion to the Gulf region every year. It also threatens to seriously harm the region’s tourism industry, which brings in $100 billion for Gulf states annually. And then there are damages that are more difficult to measure. The blast killed 11 workers and injured 17 others, and hundreds of gallons of oil are still seeping into the Gulf every day, standing to destroy fragile coastal ecosystems. It’s hard to put a dollar figure on such losses.

Not long after the Exxon Valdez spill of 1989, Congress passed the Oil Pollution Act of 1990, which imposed a fee on oil companies—currently  8 cents a barrel—to be paid into the Oil Spill Liability Trust Fund. The federal government uses the fund to cover losses from oil accidents—such as  the destruction of wildlife and fisheries—up to $1 billion per incident. It looks very likely that this particular incident will far exceed that limit; current estimates are as high as $8 billion. But the 1990 law also capped the liability of companies at just $75 million for all costs claimed by parties injured in an accident, including individuals, businesses and government agencies.

This means that it could be very hard for the government to force BP to pay for all the expenses stemming from the spill. A trio of anti-drilling senators on Monday introduced the “Big Oil Bailout Prevention Act,” a measure that would raise the liability limit on spills to $10 billion per incident.

“Let’s be honest, $75 million to BP, that earned $5.6 billion in the last quarter alone, is less than a drop in the bucket,” said sponsor Sen. Robert Menendez (D-NJ) on Tuesday. Raising the cap to $10 billion, he said, “gives us real access to the type of money necessary and makes the polluter pay.” Menendez also said it would instill more “discipline” on companies to “make sure they’ve got the safest technology and that it is working.” Borrowing language from the debate over financial reform, Menendez said they hope to drive home the point that offshore drilling isn’t “too safe to spill.”

The measure is co-sponsored by Frank Lautenberg (D-NJ) and Bill Nelson (D-Fla.).

The White House on Tuesday endorsed efforts to raise the cap, although it didn’t explicitly weigh in on the $10 billion figure proposed by the senators. White House communications director Daniel Pfeiffer noted in a blog post that the $75 million cap can be lifted “if BP is found to be grossly negligent or to have engaged in willful misconduct or conduct in violation of federal regulations.” “BP is responsible for—and will be held accountable for—all of the very significant clean-up and containment costs,” wrote Pfeiffer. “They will pay for the mess they’ve made.”

Meanwhile, some environmental advocates are questioning whether even a $10 billion cap is high enough. “The clean up costs of this spill could go well over that,” Michael Brune, executive director of the Sierra Club. “This seems to be the least they can do at this point.”

Meanwhile, BP has been working to lower its potential liability for the spill. The company was encouraging coastal residents to sign forms accepting a meager one-time payout of $5,000 in return for waiving their right to any future damage suits against BP, until the attorney general of one of the affected states, Alabama, told the company to knock it off. But even when they are on the hook for damages following oil spills, companies have successfully managed to keep cases tied up in litigation for decades. It took until 2008 for the victims of the Exxon Valdez spill to be compensated for their losses—and that was only after the Supreme Court stepped in. And in the end the court reduced the compensation for 33,000 landowners, Alaskan Natives, and fishermen from $2.5 billion to just $500 million.

“[Exxon] fought every thing tooth and nail,” said Jacqueline Savitz, director of pollution campaigns at the oceans advocacy group Oceana. Looking at the current situation in the Gulf, Savitz said, “This is probably going to be a long, litigious battle for years to come.”