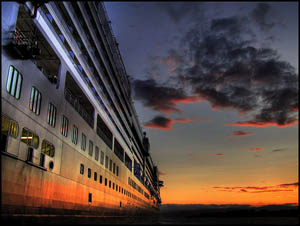 After a BP refinery in Texas exploded in 2005, killing 15 workers and injuring scores more, the oil giant paid $1.6 billion in settlements to employees and their families. But the families of the workers killed on BP’s Deepwater Horizon rig in the Gulf of Mexico probably won’t receive a similar windfall. That’s because the Deepwater rig is legally considered an ocean-going vessel, and was more three nautical miles offshore at the time of the accident. As a result, the families of the dead workers can only sue BP and its contractors under a 90-year-old maritime law, the Death on the High Seas Act, which severely limits liability. In some cases, BP could get away with shelling out sums as paltry as $1,000.

Gordon Jones, a mud engineer killed on the Deepwater rig, left behind a pregnant wife who had quit her job to stay home with their two-year-old son. But thanks to DOHSA, the most BP could owe them is the equivalent of Gordon’s salary over his working life, minus what he would have paid out in taxes and personal expenses. So if Gordon made $60,000 a year for the next 30 years, BP could owe the family less than a million dollars.

The math works out even worse for workers without dependents. Jones’ brother Chris testified before the Senate Judiciary Committee that one of the other Deepwater workers who was killed was single and childless. That means his family would only be entitled to recover funeral expenses under DOHSA. But because his body was never recovered after the explosion, the funeral costs will be lower. BP could end up paying his family as little as $1,000 for their loss.

Chris and his father Keith have pleaded with Congress to fix the law so that any employer can be held accountable for negligence—regardless of whether an employee dies on land or at sea. Last week, Senate Judiciary chair Patrick Leahy (D-Vt.) introduced legislation that would do just that.

But Leahy’s bill faces an ugly political fight. And giant oil corporations—the most obvious potential opponents of such legislation—may not even have to flex their lobbying muscle. There’s another powerful industry with an interest in doing BP’s dirty work to preserve the status quo. That would be cruise line operators—and when it comes to Beltway battles, the cruise lobby is no Love Boat.

Just ask Son Michael Pham, the vice president of the International Cruise Victims Association. In 2005, his parents went on a Caribbean cruise and never came back. Carnival Cruise Line, one of the world’s largest cruise operators, never offered any explanation for what had happened, and has refused to discuss the incident with Pham and his family since then. That was how Pham discovered the horrible divide in the way the law treats people killed through negligence at sea. “We couldn’t take legal action to get justice,” he says. Long before the BP explosion, his group was lobbying Congress for DOHSA to be overhauled.

DOHSA was created in 1920 to ensure that the widows and children of seamen could get a share of their husbands’ or fathers’ salaries if they were killed at sea. The law was rather progressive for its time: Previously, the corporations didn’t have to pay the widows anything at all. But DOHSA didn’t change with the times.  And because it’s a federal law, it trumps state tort laws that allow injured people to recover all sorts of damages in personal injury cases, including punitive damages for truly egregious corporate behavior, compensation for grief or the loss of companionship, and even the pre-death pain and suffering of the victim.

DOHSA has been updated once, in 2000, when TWA Flight 800 crashed off the coast of New York, killing a host of children. Their families had had no legal rights to force the airline to pay out because the kids didn’t have income. That year, Congress amended DOHSA, but only to allow commercial airline victims to sue for non-economic damages. The families of other folks killed at sea were still out in the cold.

Finally, in 2009, the cruise ship victims succeeded in getting legislation introduced with help from Sen. John Kerry (D-Mass.) that would have updated DOHSA in just the way Leahy has proposed. That change would have allowed families of cruise ship victims to sue for non-economic damages—a huge deal for cruise-goers, because so many are retired and have no salaries that would provide the basis of a legal award under the current law.  It also would have saved the Jones family a trip to Washington to plead their case on behalf of Gordon’s widow and children.

But the cruise industry spent $2.2 million fighting these changes. The Carnival cruise line company alone has donated more than $400,000 since 2007 to members of Congress from both parties, according to the Center for Responsive Politics. The offending provision was eventually removed from the cruise-ship safety bill.

The Cruise Lines International Association did not return requests for comment. But Pham says he has no doubt that the DOHSA revision will not slip by without the lobbyists’ notice. “Cruise lines absolutely didn’t want DOHSA to be part of that [2009 bill] at all,” he says, noting that the industry would suddenly become liable for all sorts of incidents that it’s currently able to dodge legal responsibility for—everything from on-board murders to rapes to mysterious disappearances like that of Pham’s parents. “It’s an industry that self-polices. When there’s an incident on board, there’s nobody but themselves investigating themselves. You’re not going to turn yourself in.”

Pham suggests that perhaps his group should join forces with the families of the deceased Deepwater workers. “Hopefully the current issue with BP will keep this issue in front and create more public awareness,” he says. But, as he points, it’s unfortunate that it “takes a tragic incident like [the Gulf spill] for people to realize they’ve been taking this for granted.”