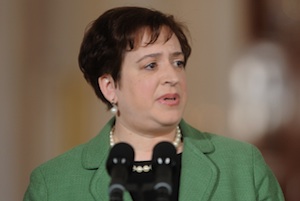 Remember Elena Kagan? Monday kicks off her confirmation hearings to be President Obama’s second nominee to the Supreme Court in as many years. In part because of a crush of other news—BP, McChrystal, etc.—Kagan’s nomination has not proved to be much of a story lately. Despite poring over 160,000 pages of documents related to her government service, Republicans have turned up precious little to give her Senate grilling much dramatic potential. One of the more controversial items in the Kagan file is the fact that she helped shepherd that raging radical Justice Ruth Bader Ginsburg through her confirmation process. (Lest we forget, Ginsburg once advocated public funding for abortion, a constitutional right to prostitution, co-ed prisons, and abolishing Mother’s Day, if you can believe it.)

Unlike last summer’s hearings for Justice Sonia Sotomayor, Kagan is not saddled with controversial rulings like the Connecticut firefighters case. Training for the job since high school, she has uttered no “wise Latina” quotes for the Senate Judiciary Committee members to condemn. Most of Kagan’s confirmation hearings probably won’t be about her at all, but rather a partisan debate over whether the current Supreme Court has been overreaching. In short, it’s not likely to produce many candid moments from the nominee. The only real wildcard question hanging over the proceedings might be: Will Sen. Tom Coburn (R-Okla.) ask Kagan if she’s a lesbian?

While Eliot Spitzer seemed to settle the question that dogged Kagan immediately after her nomination, when he said that he knew guys who had dated her in college, there are plenty of evangelical Christians out there who are not convinced that Obama isn’t secretly plotting to name a gay justice as an agent of the homosexual agenda. (Or possibly an “ex-gay”: Last week, the president of Parents and Friends of Ex-Gays and Gays, issued a statement suggesting that maybe Kagan isn’t gay now, but she might have been before Obama nominated her. The group urged her to come out publicly as an “ex-gay.”) The anti-gay group MassResistance is threatening to release another “damning” report on Kagan’s gay activism on Monday, one they’ve been working hard on with Peter LaBarbara, head of Americans for Truth About Homosexuality.

Given the evangelical opposition to Kagan’s nomination, it’s not inconceivable that Coburn or another GOP senator will just come out and ask her if she’s a lesbian under the guise of setting the record straight and as a bone to some of their constituents. After all, it’s clear from the list of witnesses they’ve assembled that the GOP intends to make gay rights the centerpiece of its opposition to Kagan. The GOP’s plans to introduce a host of military types, who will presumably discuss Kagan’s alleged hostility to the armed forces and the “don’t ask, don’t tell” policy, stemming from her days as dean of Harvard law School, when she barred military recruiters from meeting with students in the school’s office of career services. They’ve also got Tony Perkins in the queue, the head of the anti-gay Family Research Council, who in late May wrote an op-ed in the Washington Times bashing Kagan for joining other law professors in a legal brief opposing the Solomon Amendment as unconstitutional discrimination against gays and lesbians. Perkins wrote:

To recognize any distinction whatsoever—to “discriminate”—between the only type of sexual relationship that can reproduce the human race and a non-procreative type of relationship that has given us an epidemic of sexually transmitted diseases is “not just”? I would argue that failing to make such a distinction is not realistic, not honest and not credible.

And as a sign of just how desperate the minority party is to find anyone to testify that Kagan really isn’t qualified to join the court, the GOP initially invited retired US Army Lt. Gen. William “Jerry” Boykin to weigh in on her treatment of the military at Harvard Law School. In 2002, Defense Secretary Donald Rumsfeld tapped Boykin to serve as Deputy Undersecretary of Defense for Intelligence, where he was charged with heading the military’s search for Osama bin Laden and other terrorist leaders. The following year, news leaked that Boykin had been spending a lot of his free time preaching in fundamentalist churches around the country about the Christian holy war on Islam.

Once, in an Oklahoma Baptist church, Boykin showed the congregation a series of photos he had taken in Somalia shortly after the famous 1993 Black Hawk Down incident, which resulted in the deaths of more than a dozen Americans. He claimed that a dark shadow that appeared in one of his photos across the top of Mogadishu was not a film processing fluke but rather the “principalities of darkness… It is a demonic presence in that city that God revealed to me as the enemy.” Such commentary led to an internal investigation and the military reprimanded Boykin for speaking out of school without permission. He finally retired in 2007 and ever since has been a regular on the fringe-right talk circuit, joining such luminaries as LaBarbera and the Traditional Values Coalition’s Lou Sheldon to talk about the culture wars.

Boykin’s presence on the GOP witness list lasted but a few hours. Once word got out Friday about his dubious credentials, the GOP promptly disinvited him, according to The Hill.

It’s too bad, because his departure leaves most of the hearing’s entertainment prospects to the likes of Sen. Jeff Sessions (R-Ala.), the judiciary committee’s ranking member, and of course, Coburn. A favorite of the religious right and a longtime foot-soldier against the “gay agenda,” Coburn once warned his fellow Republicans that “the gay community has infiltrated the very centers of power in every area across this country, and they wield extreme power. [The gay] agenda is the greatest threat to our freedom that we face today.” During his 2004 Senate campaign, Coburn claimed that lesbianism is “so rampant in some of the schools in southeast Oklahoma that they’ll only let one girl go to the bathroom.”

Coburn, an ob/gyn, is also not squeamish about addressing issues bluntly. In his early years on the Hill, he used to order pizza and offer STD classes to interns and staffers, complete with graphic slides. During the confirmation hearings for Sonia Sotomayor last summer, he famously quipped that the nominee “had some ‘splaining to do,” channeling Ricky Ricardo. Coburn won’t lose any votes by asking Kagan how she feels about Ellen DeGeneres. But then again, he probably knows better. Oh well. At least we’ll have Sen. Al Franken (D-Minn.) to liven things up.