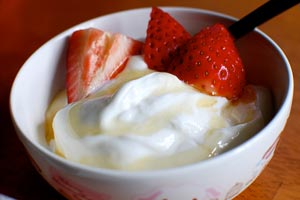 A few years back, when I lived in the predominantly Greek NYC neighborhood of Astoria, Queens, I got hooked on two foods: 1) flaky, cheesy spinach pie, and 2) yogurt from the local Mediterranean specialty market. Thick, creamy, and tangy, it bore little resemblance to the gelatinous American stuff I was used to. I bought big containers of it and ate it every day for breakfast with fruit. Sadly, since moving to California, I have yet to find a spinach pie as delicious as those in Astoria. (Bay Area readers, your tips are welcome.) But happily, at around the time that I moved, American yogurt manufacturers started making Greek-style yogurt, and since then it’s exploded in popularity: All my local supermarkets carry it now. I still think it tastes better than American style. But it’s also pricier. Which got me wondering: Which kind of yogurt is more nutritious? And which is better for the environment?

Ohio State University nutritionist Julie Kennel Shertzer explained to me that both Greek- and American-style yogurt are made by fermenting milk with live bacteria cultures—the only difference is that Greek yogurt is strained to remove the liquid whey, hence its thicker consistency. (The Greek yogurt company Fage has a good explanation of the process here.) Both are nutritional superstars: They’re excellent sources of calcium and good sources of protein, their bacteria cultures aid digestion, and the unsweetened low- and nonfat varieties are low in calories. But according to Shertzer, Greek yogurt does have a few nutritional advantages over regular yogurt: “Since it’s a more concentrated product, it packs a few more grams of protein per serving,” she says. It’s also a bit lower in sugar and carbohydrates, since lactose, a form of sugar present in all dairy products, is removed with the whey.

But Greek yogurt is not better for the environment than American-style yogurt, for one simple reason: It requires much more milk to make. For American-style yogurt, the ratio of milk to final yogurt product is about 1:1 (sometimes more like 1.3:1, since many manufacturers add in a little bit of condensed skim milk to improve the texture and protein content), while for Greek yogurt it’s often as high as 4:1. Considering that dairy farms take quite a toll on the environment and produce a large amount of greenhouse gases (a recent United Nations study found that 3 percent of the world’s greenhouse gas emissions come from milk production, including shipping) the environmental difference between Greek and American yogurt is fairly significant.

There’s another problem, too: What to do with the whey that’s left over from the Greek yogurt straining process? Rolf Carlson, vice president of sourcing and development at the yogurt manufacturer Stonyfield Farm explained that there are two kinds of whey: Sweet whey can be used as a food additive, but acid whey isn’t as useful. Many major yogurt manufacturers give their acid whey to farmers to be used as animal feed or fertilizer, but according to Carlson, farmers must be careful when applying it to cropland, since whey runoff can pollute waterways (PDF). “It can affect the microbiology of the water,” says Carlson. Some good news: Both Stonyfield Farm and the Greek yogurt company Chobani told me they are in the process building pricey anaerobic digesters to convert their waste whey into energy to power the factories.

If you’re worried about Greek yogurt’s environmental problems, you might consider making your own at home, and using the leftover whey: Simply pour American-style yogurt into cheesecloth and strain it for several hours over a container. The yogurt in the cheesecloth will be thicker and creamier when it’s done. Use the whey left in the container instead of water to make rice—or in biscuits or just about any baking recipe in place of water. Supposedly you can also drink it. (I’ve never tried it, but Mother Jones co-editor-in-chief Monika Bauerlein swears it’s delicious.)