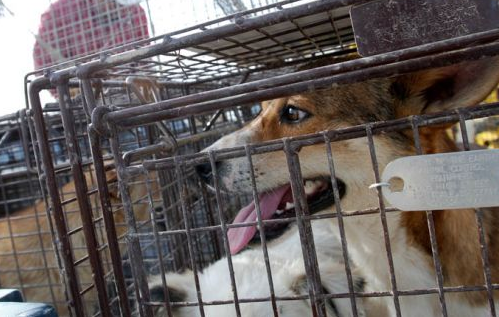 Wild Iraqi dogs are rounded up on a US base. <a href="http://www.dvidshub.net/?script=images/images_gallery.php&action=viewimage&fid=47383">Photo by Staff Sgt. Curt Cashour / Creative Commons</a>

Amid its struggles with Sunni jihadists, Shiite radicals, and Kurdish separatists, the Iraqi government is training its sights on a new enemy: dogs. According to the UK’s Daily Mail, Iraq is spending 35 million dinars—about $30,000—to send 20 shotgun-wielding squads out to hunt down the capital’s strays. Their goal: Killing one million canines. So far, they’ve scratched 42,000, and they’re averaging 2,400 a day. “We could consider this the biggest campaign of dog execution ever,” Baghdad’s chief veterinarian, Mohammed al-Hilly, told the newspaper.

Put so bluntly, it sounds heinous, perhaps even criminal. It’s also a tough pill to swallow for many US servicemembers in Iraq, who find comfort in adopted Iraqi pets that wandered in from the wild. But the dog-eradication program is incredibly popular among Iraqis, and could even enhance the government’s standing with its discontented populace. And it’s not unprecedented: Saddam Hussein used to sponsor dog roundups, and the US military is currently waging its own campaign against the country’s feral dogs.

View photos depicting the many roles of wild and domestic animals in Iraq—companions, workers, nuisances—in MoJo‘s slideshow, “The Dogs (and Cats) of War.“

Wild animals also pose special problems for American service members in Iraq. Despite the fortifications at the US coalition’s largest bases—mazes of walls, cameras, guns, checkpoints—coyotes and cats slip through at will, often crossing soldiers’ paths in the dusty dark of night, catching fish on base lakes and moats, or tracking rats underneath the soldiers’ sleeping trailers. Rabies is an ever-present concern, as is the general nastiness of the feral animal population. Plus, military working dogs are ubiquitous in Iraq, and keeping them away from wild animals is a paramount concern. Units that rely on working animals have rules of engagement empowering them to kill any creature that ventures too close to their dogs.

The US military command also forbids soldiers to own pets. It’s right there in General Order No. 1, the master document regulating military and contractor behavior: “Adopting as pets or mascots, caring for or feeding any type of domestic or wild animal” in the Iraqi war zone is a crime, on a par with using illegal drugs, distributing pornography, drinking liquor, keeping war spoils, or selling your gun. The military doesn’t just ban contact between soldiers and animals; it’s contracted with KBR—yes, that KBR—to provide “vector control” on big installations like the Victory Base Complex on Baghdad’s outskirts. The company’s employees roam those bases, rounding up any animals they find, especially those being sheltered by the troops. All the animals are destroyed.

“No one involved in the animal control program enjoys the task,” Lt. Colonel Raymond F. Dunton, chief of preventive medicine for the US military in Iraq, told the AP. “Unfortunately, it is critical that we continue this work to protect the health and safety of our service members.”

“We are in the prevention business. We try to prevent problems,” said Gary Orsack, manager of KBR’s vector control program on the Victory Base Complex, which surrounds Baghdad International Airport. All the animals caught on VBC are taken to a clinic on an adjacent outpost, where they are euthanized. The name of the post where that clinic is located: Camp Slayer. 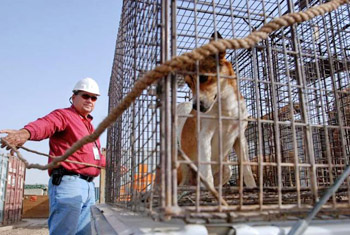 Vector Control: A KBR contractor locks up a dog found on the Victory Base Complex. (Staff Sgt. Curt Cashour)

Knowing that General Order No. 1 could mean death for any unlucky animal, soldiers and contractors on many forward operating bases (FOBs) take great pains to protect their fuzzy charges. “I didn’t step foot on a FOB that didn’t have at least one dog. Or a resident feral cat. Or pet monkey purchased off base. Or captured python,” writes Capt. Michael Cummings, a prolific blogger, of his deployment to Camp Joyce in Afghanistan. “I’ve seen sergeants major and lieutenant colonels risk their careers over their favorite dogs.” Cummings’ unit adopted three dogs near the end of their tour. The alpha dog, he writes, “was a bitch nicknamed Mama. She looked like a wolf, with gray fur and menacing eyes. Mama single-handedly kept our FOB clear of other animals, ferociously defending the FOB from any wild Afghan dogs who tried to scavenge our trash pit.”

A week before Cummings and his unit were set to return home, orders came down to dispose of all adopted animals on the base before the incoming unit’s soldiers arrived. “The day our full-bird colonel and his replacement came on a battlefield tour, suddenly all the dogs were gone,” he writes. “I assumed they had been taken to the trash pit and executed, the fate of many dogs downrange. But as soon as the chopper took off, bounding around a corner were the mini-pack: Mama, K2 and the dog with no name.”

With help from animal lovers like the Baghdad Cat Lady and Marine Maj. Brian Dennis and Nubs, hundreds of service members and contractors in Iraq have adopted strays and brought them home. “These men and women are trained to be tough, but when you’ve seen some of what they’ve seen, a lot of that adds up,” says Terri Crisp, who coordinates Operation Baghdad Pups for the Society for the Prevention of Cruelty to Animals International (SPCAI). “You can’t share a lot of it with your buddies, if they’re going through the same emotions. You can’t cry, you can’t hug. But you can do all that with a dog.” She assists soldiers who want to bring their adopted pets home with them. It’s a costly and dangerous process, requiring Crisp and her staff to fly with a security detail in and out of Baghdad or Erbil with the animals. So far, the effort has retrieved 265 animals—42 cats and 223 dogs—for families stateside.

She’s fielded many oddball requests from service members to repatriate their unconventional mascots. “I had one Marine unit that wanted to bring a chicken back,” she laughs, a request that the Centers for Disease Control poo-pooed (avian flu). “There was another Marine unit that wanted a donkey brought back.” Those devil dogs withdrew their request when the unit that relieved them happily adopted the animal. 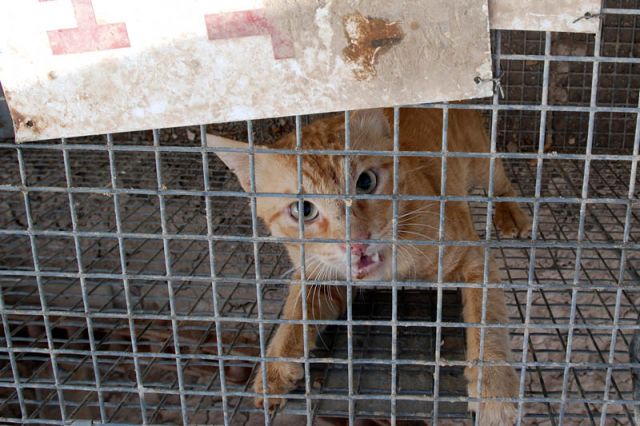 Despite the military’s no-animals policy, Crisp says the brass recognizes that the troops’ illicit pets are morale boosters. “The military has been fully aware from the beginning of what we’re doing,” she says. “They could stop our flights if they really wanted, but they haven’t. It’s kind of, you know, ‘Don’t ask, don’t tell.'”

Service members’ conflicted feelings over the Iraq exterminations reflect the larger dilemmas of an occupying force in an insurgent war: How do you bring stability, civility, even compassion, to a region marred by lawlessness and violence? Is it sensible to break your values in the short term in the hope of preserving them later?

In Iraq, as in the wider Islamic world, canines are widely considered practically and ritually unclean. Even where they’re kept as pets or herders, they usually live outside rather than in the home. Between that and a general bias against spaying or neutering dogs, the population of wild canines has grown out of control. Iraqis generally view the dogs as a nuisance at best, a safety threat at worst. Rumors swirl about deadly attacks by packs of dingoes and coyotes in the night. The Baghdad provincial government claimed in 2008 that 13 people had been killed by wild dogs. Perhaps that’s why, Saddam Hussein mollified the masses with periodic dog hunts. His Baghdad successors have never stopped the practice, only accelerated it. “If I were a mother in Iraq, with children,” says Crisp, “I would probably teach them to fear dogs, too.” 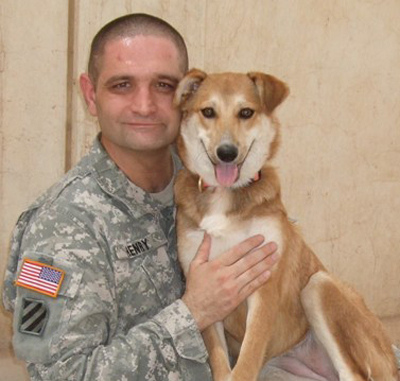 The Iraqis’ tactics of shooting and poisoning dogs—what the SPCAI’s Crisp calls “killing sprees”—are “incredibly inhumane,” she says. “But we also have to be realistic,” she adds. “The population is totally out of control. The way things are in Baghdad, it’s a breeding ground for diseases.” And just as military action by itself can’t end an insurgency, she says studies have shown that you can not control animal populations by killing alone. Education, vaccination, and spaying and neutering are also necessary. “But you also have to look at the situation in Iraq and ask yourself if that’s possible,” she says. “It’s a pretty hopeless situation.”

Now Crisp and SPCAI are trying to sell the Iraqi government on more humane ways to control the dog population as well as change attitudes toward dogs in general. “We’ve met with the Ministry of Agriculture in Erbil, and they were very receptive,” she says. Among children in the region, “There’s a curiosity and an interest in the dogs, and there’s opportunities for education, but it’s not gonna happen overnight…There’s just no easy solution.” With the support of thousands of Americans in Iraq and at home, Crisp hopes SPCAI can stave off a final solution for Iraq’s . “It’s our hope that down in Baghdad, they’ll start to adopt humane measures,” she says. “But for the dogs on the street now, it’s too late.”

View photos depicting the many roles of wild and domestic animals in Iraq—companions, workers, nuisances—in MoJo‘s slideshow, “The Dogs (and Cats) of War.“