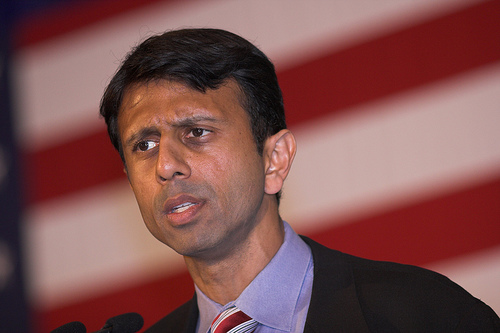 Louisiana Gov. Bobby Jindal is at war with the federal government over his plans to build protective barrier islands, or sand berms, to shield the state’s coast from BP’s oil spill. He called a news conference yesterday to blast the government for standing in the way of his plan. “We don’t have time for red tape and bureaucracy,” Jindal told reporters. “We’re literally in a war to save our coast.”

But Jindal’s attack, critics say, is pure political grandstanding from an politican who’s been floated as a potential Republican presidential candidate. They say he’s putting his desire for the limelight ahead of the state’s long-term environmental interests and possibly making the coast more vulnerable to storms.

The roots of the current showdown strech back to last month, when Jindal raised a fuss in order to get an expedited permit from the US Fish and Wildlife Service (FWS) to construct sand berms off the coast of his state. The berms, he said, would protect the nation’s second oldest wildlife refuge, Breton National, and Chandeleur Islands from the oil coating the Gulf. The FWS granted the permit on the condition that the state pipe in sand from a point further up the island chain, rather than harvesting it from the the shoreline of the Chandeleur Islands, a critical nesting area for birds like the brown pelican and an essential barrier to protect the refuge from storms.

The state agreed to those conditions, which are clearly outlined in the permit. But when construction began on June 13, the state said the piping wasn’t ready. The federal government, in turn, agreed to allow the state remove sand from the prohibited area for about a week until the piping arrived. That grace period has expired, but Louisiana says the pipes still aren’t ready. It wants to keep removing sand from the off-limits area, but this time the federal government put its foot down.

“You don’t want to destroy the village to save the village,” Tom Strickland, the U.S. Interior Department’s assistant secretary for fish, wildlife and parks, told reporters Wednesday. “It’s a question of whether we’re going to impair that island chain in a way that it may not ever be able to be restored.”

Strickland noted that the berms would last “probably no more than 90 days.” While they’re temporarily useful in keeping oil off the shores, they’re not terribly helpful in the event of a hurricane. Worse, removing sediment from the island actually makes the region more vulnerable to storms, and hurricane season is already underway.

“Our objective is to make sure if we’re going to do this, it’s going to support long-term restoration and certainly not exacerbate the problem,” Daniel Ashe, deputy director for policy at the USFW tells Mother Jones. “We wouldn’t want to create a long-term problem for a temporary fix.”

But griping about the berms has, enviros say, become Jindal’s plan to keep the spotlight on him and his criticism of the federal government, long-term damage to the state’s ecosystem be damned. (He’s also still pushing for the moratorium to be lifted, despite the oil disaster threatening his state.) But despite Jindal’s rhetoric, the state is still continuing to dredge from other areas; the federal government has just asked them to stop pulling from the off-limits area.

“The short-term fix isn’t going to hold for very long, but it makes Jindal look like a hero,” says Jamie Rappaport Clark, executive vice president at Defender of Wildlife and a former USFWS official. “They’re robbing from Peter to pay Paul and digging a hole to build a berm that is going to collapse anyway.”