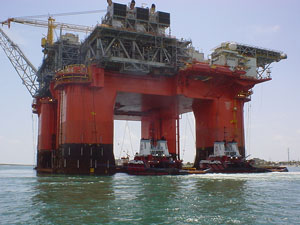 Last week, President Barack Obama put new deepwater drilling operations on hold for another six months. With the Gulf of Mexico spill entering its fifth week, this move was meant to show that the administration is taking a more cautious approach to offshore drilling, after it had announced a vast expansion just weeks before the BP disaster.

Many news accounts on the moratorium extension implied that all deepwater Gulf operations had been shut down. But that’s not the case. The administration is allowing deepwater drilling operations already in production in the Gulf to continue—including some that may pose a greater risk than the Deepwater Horizon. Exhibit A: BP’s other major Gulf operation, the Atlantis, which sits 124 miles off the Louisiana coast.

Kenneth Abbott, a project control supervisor BP contracted to work on the Atlantis, and the environmental group Food & Water Watch filed suit against the federal government on May 17 seeking a temporary injunction to force the Minerals Management Service (MMS) to shut down the platform. Abbott claims that his contract was terminated shortly after he alerted management to the rig’s lack of crucial engineering documents in late 2008.

According to Abbott, the BP Atlantis lacks more than 6,000 documents that are key to operating the rig safely. Abbott has said that the vast majority of the project’s subsea piping and instrument diagrams were not approved by engineers, and the safety systems are out of date. In March 2009, Abbott took his concerns about the rig to MMS, the Department of Interior office responsible for regulating offshore drilling. He says the agency requested some of these documents from BP, but failed to seek specific diagrams of key components necessary for ensuring the rig’s secure operation.

An internal BP email that came out in the course of Abbott’s dispute refers to the potential for “catastrophic operator errors” on the rig due to these lapses. The suit argues that without these documents, the rig operators “are flying blind, and have no way to assure the safety of offshore drilling operations.” Food & Water Watch began pushing for lawmakers to intervene on the rig back in August 2009.

A group of 19 Democratic House lawmakers raised concerns about the Atlantis in a letter to MMS in February, noting “disturbing reports” of safety lapses and warning of the “risk of a catastrophic accident.”  In a May 19 letter, those lawmakers, led by Rep. Raul Grijalva (D-Ariz.), urged Interior Secretary Ken Salazar to call for “an immediate shutdown [of the Atlantis rig] until it can be shown that this platform is operating safely.” The Atlantis, which produces 200,000 barrels of oil a day, operates 7,000 feet below the sea surface—2,000 feet deeper than the Deepwater rig. That suggests that if a blowout occurred, the Atlantis could release far more oil than the Deepwater well. “We are very concerned that the tragedy at Deepwater Horizon could foreshadow an accident at BP Atlantis,” the House members wrote.

MMS promised House members after their initial letter that the agency would conduct an audit of the Atlantis and issue a report by the end of May. But that report has been delayed due to the Gulf disaster, according to the agency.

Elizabeth Birnbaum, who served as head of MMS until she resigned amid criticism of the beleaguered agency last month, told a House panel on May 26 that the agency has reviewed operations at the Atlantis and has “not found anything” indicating that the rig should be shut down. But Grijalva believes that the agency may just be inspecting the inadequate paperwork that it has already approved without giving the rig any closer scrutiny.

This contention is also supported by Food & Water Watch, which submitted a Freedom of Information Act request on March 1 to MMS for records related to agency employees conducting inspections of the Atlantis rig’s subsea documents. The request was rejected—an MMS FOIA officer stated that the agency doesn’t require documentation of the subsea components as they were built. Food & Water Watch says that without reviewing those documents, MMS would be unable to truly determine whether or not the rig was safe.

In the past weeks, Obama has repeatedly criticized the “cozy” relationship between oil companies and federal regulators. And the Department of Interior’s report on the offshore operations calls for new inspection and reporting procedures, tighter enforcement of existing rules, and the development of “new, faster ways of stopping blowouts in deepwater,” among other recommendations. Yet at a Senate hearing last month, Interior Secretary Ken Salazar shrugged off the suggestion that the administration should pause operations that were approved under the same lax system that allowed the Deepwater rig in the first place. “We were not going to have those stopped mid-way,” Salazar told senators.

“We’re missing an opportunity, the administration is, by not insisting that production be suspended until we fully investigate the allegations,” says Grijalva in an interview. “There’s not only urgency to it, but it would be a prudent, politically smart thing for them to do as well.”

“It’s clear to us that while there are problems with the entire industry, BP is probably the worst actor in terms of cutting corners, not having safety procedures, not having the necessary safety tech for operating platforms,” said Wenonah Hauter, executive director of Food & Water Watch. “There should be a review by MMS of all the operating platforms to make sure safety documents and procedures are in place.” (A spokesperson for Abbott could not be reached for comment.) The Center for Biological Diversity has also filed suit against the Department of Interior for granting waivers to the National Environmental Protection Act for Gulf leases, and has signaled that it intends to sue over non-enforcement of both the Marine Mammals Protection Act and Endangered Species Act in the Gulf.

Meanwhile, the group of House members are going to continue to push for a halt on all drilling operations. Says Grijalva, “Given the track record of industry and the track record of the agency in charge of oversight, it just seems to be the one safe route to take right now to assure the American people that another catastrophe won’t happen.”