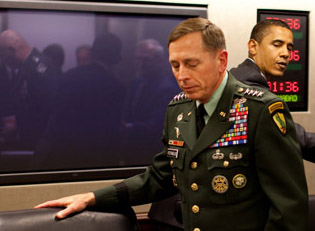 As soon as the news was reported that Gen. David Petraeus is succeeding soon-to-be-retired Gen. Stanley McChrystal as commander of the US and NATO forces in Afghanistan, the media narrative was set in stone: the super-general who won the war in Iraq with the so-called surge can now work his magic in another theater.

It’s hard to stop a locomotive meme—which is what the surge story has become. But the success of the surge in Iraq remains debatable to this day. Still, try injecting that point into media discussions of Iraq or Afghanistan. Yet with Petraeus taking over the Afghanistan war, it’s worth noting the other side of the surge tale. So as a public service, here are a few analyses that question the surge hype.

From Stephen Walt, a professor of international relations at Harvard:

The surge had two main goals. The first goal was to bring the level of violence down by increasing U.S. force levels in key areas, forging a tactical alliance with cooperative Sunni groups, and shifting to a counterinsurgency strategy that emphasized population protection. This aspect of the surge succeeded, though it is still hard to know how much of the progress was due to increased force levels and improved tactics and how much was due to other developments, such as the prior “ethnic cleansing” that had separated the contending groups.

The second and equally important goal was to promote political reconciliation among the competing factions in Iraq. This goal was not achieved, and the consequences of that failure are increasingly apparent. What lies ahead is a long-delayed test of strength between the various contending groups, until a new formula for allocating political power emerges. That formula has been missing since before the United States invaded — that is, Washington never had a plausible plan for reconstructing a workable Iraqi state once it dismantled Saddam’s regime — and it will be up to the Iraqi people to work it out amongst themselves. It won’t be pretty.

I thought some of the surge-era deals in Iraq would unravel but I didn’t think that would begin happening this quickly. It’s only March 2009, and already Awakening fighters are fighting U.S. soldiers in the streets of Baghdad.

Anyone who tells you that the Iraq war is over should be forced to memorize this paragraph from the Sunday edition of the Washington Post:

As Apache helicopter gunships cruised above Baghdad’s Fadhil neighborhood, former Sunni insurgents fought from rooftops and street corners against American and Iraqi forces, according to witnesses, the Iraqi military and police. At least 15 people were wounded in the gunfights, which lasted several hours. By nightfall, the street fighters had taken five Iraqi soldiers hostage.

That is Iraq 2009. Does it sound peaceful to you? Does it seem like the political questions vexing Iraq have been solved?

I’ve held off on commenting on the situation in Iraq during this unsettled transitional period. The bombings in Baghdad (another big one today) strike as painful but irrelevant. On the plus side, al Qaeda in Iraq has suffered some good hits. On the negative, the political situation looks as unresolved as ever. The other day an Iraqi friend gloomily predicted to me that the question of the next government would remain open until September, and then, once it was solved and the Americans were out of the way, violence would begin to increase.

My gut feeling is that Iraq is adrift, and that this slow centrifugal process ultimately will result in, at best, a loose confederation. In other words, not only do I think the glass is half empty, I am not sure how long the glass can take the strain of what it is holding.

But the truth is that I don’t know and neither does anyone else. But as Tom Friedman used to say every year, the next six months in Iraq could be decisive.

Former Democratic  Indiana congressman Lee Hamilton told CNSNews.com that the surge in Iraq may have “temporarily” achieved its military purpose of reducing violence, but its political intention of promoting “reconciliation” has not been accomplished….

“The purpose of the surge in Iraq was to reduce the violence, which it did, but it also had a political purpose and the political purpose was to encourage reconciliation, which has not happened,” Hamilton, current president and director of the Woodrow Wilson International Center, told CNSNews.com.

“So the military objective was achieved temporarily, we’ve had a resurgence of violence in recent days,” he added. “The political objective has not been achieved.”

From Diana West, a conservative columnist:

The problem is, the Iraq surge did not work. Yes, the U.S. military perfectly executed its share of the strategy — the restoration of some semblance of calm to blood-gushing Mesopotamian society — but that was only Step One. The end-goal of the surge strategy, Step Two was always out of U.S. control — a fundamental flaw. Step Two was up  to the Iraqis: namely, to take the opportunity afforded by U.S.- provided security (see Step One) to bring about both “national  reconciliation” and, as the powers-that-were further promised, the emergence of a U.S. ally in the so-called war on terror.

Step One worked. Step Two didn’t. The surge, like an uncaught touchdown pass, was incomplete. The United States is now walking off  the battlefield with virtually nothing to show for its blood, treasure, time and effort. In fact, another “success” like that could kill us.

Though the success of the surge is regarded in much of the media as an article of faith, it remains open to discussion and examination. Looking at Iraq these days, it’s certainly arguable that Petraeus did not work a miracle there. And the mission he faces in Afghanistan is tougher. To achieve anything resembling victory in Afghanistan, he’ll likely need far more success than the Iraq surge produced—in reality or myth.