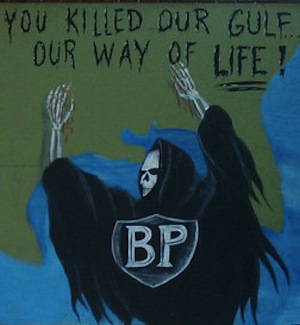 If you happen to be wondering whether it’s easier to get access to an oil-befouled public beach or wildlife refuge near Grand Isle, Louisiana, if you’re teamed up with a fancypants PBS producer, I scouted out the answer today: No.

You already know the story of how BP is trying to stymie press efforts to report on the oil spill, and all the combined credentials and charms of my colleague and I couldn’t overcome the blockade. BP’s reason for not letting us through last time? Safety. The reason for not letting us through today? The one road in to Elmer’s Island Wildlife Refuge—which, after a lot of drama, I took just last week—needs to be re-graveled or something before we can drive on it. Which might take a couple of days.

I asked today’s BP liaison/public-beach gatekeeper, Jason, who really seemed like a doll, if we could talk to the cleanup workers in the meantime. We can’t, he said with an apologetic face—but not because BP forbids them from talking to the press. It’s the subcontractors who’ve threatened to fire the workers for any media interaction.

Twenty minutes later, when I ran into some workers packing up on the Grand Isle beach, I asked them only if they were done working for the day, and they refused to tell me. One woman said, “I can’t talk to you,” and then another worker ran up to her and grabbed her arm and said, “Just ignore her, ignore her,” and the whole interaction was unsettlingly rude and sort of sad.

The workers who were staying next to me in my Grand Isle motel last week told me that when BP (not, in this case, and for the record, a subcontractor) had instructed them that they couldn’t talk to the press, it had involved a warning that media organizations would go so far as to dub audio propaganda over their videotaped commentary, putting unflattering words in their mouths.

But my awesome sleuthing powers led me to conclude that they were in fact wrapping up for the evening. Grand Isle beach, which is now open to the public and in way better shape than Elmer’s, was completely deserted but for the cops patrolling it on ATVs—and the giant blobs of oil that’d washed up all over the place in the short time since the workers had cleaned the sand. Oh, the impossibility, and interminability. That’s why residents are painting murals like this: 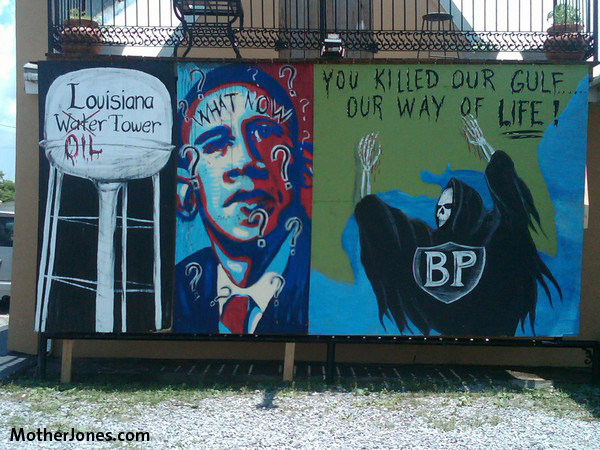 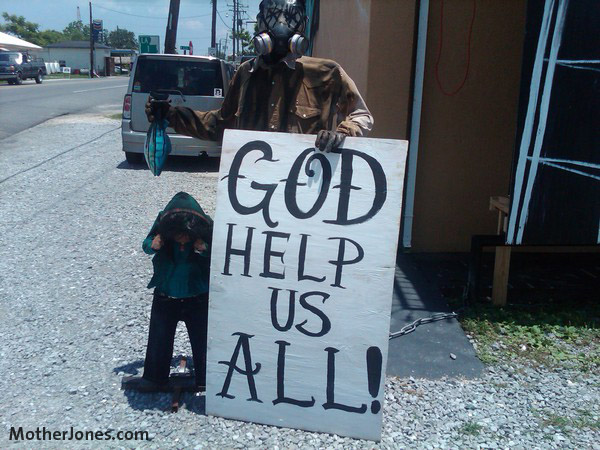 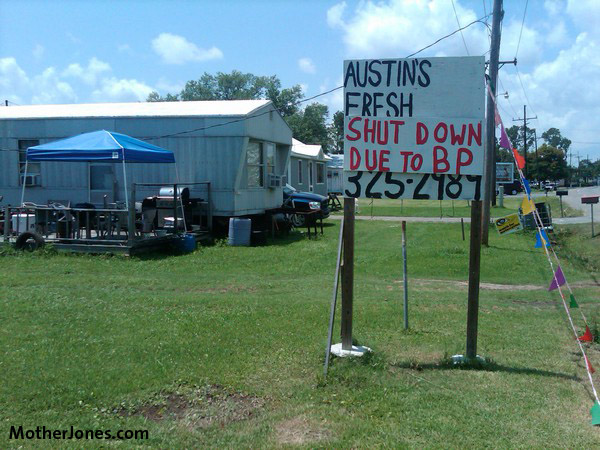 The cleanup effort continues. So many workers are being put up on Grand Isle that there was no room at any inn. Lucky for me and the PBS producer from Need to Know (a Climate Desk partner), some incredibly generous Grand Isle residents had let me know via Twitter that if I ever needed a place to stay or a drink, I was welcome to show up at their beach house. Which I did. However compromised our reporting endeavors today, attempts to land Amy and Rahlyn‘s gorgeous guest bedrooms and be plied with Crown Royal and sweet-tea vodka were a stunning success. The four of us took in the breeze on the back deck, talked in the darkness about the uniqueness of the town. And after the discussion about how these hospitality opportunities and lifestyles might go down with the environment around us reached an awkward and earnest weight, we got refills.

Read Julia Whitty’s account of how the spill is affecting the fishing industry.