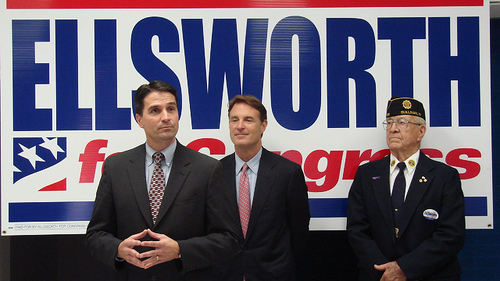 The first thing you notice when you see the names Rep. Brad Ellsworth (D-Ind.) and Rep. Roy Blunt (R-Mo.) is the title: “Rep.” Namely, member of the US House of Representatives, a chamber that’s one-half of a Congress deeply unpopular among most Americans right now. Ellsworth and Blount and just about every other incumbent running for office in 2010 understand that “Washington” and “career politician” are labels to be avoided at all costs. But you’d think, in a campaign advertisement, guys like Ellsworth and Blunt would at least acknowledge the fact that their current employer is the House of Representatives, right?

Wrong. In two new ads, one from Ellsworth and one from Blunt who’re both angling for the US Senate this fall, neither congressman so much as mentions his current job here in Washington. As he walks through a decrepit warehouse, Ellsworth says in his ad, “One thing that 25 years as a sheriff teaches you is zero tolerance for bull. There’s too much at stake. But out in Washington it’s like they live and breathe the stuff.” A two-term congressman and Blue Dog Democrat, Ellsworth goes on to rail against lobbyists and special interests in the 30-second ad, and typically paints himself as an outsider aiming to breathe fresh air into the corrupt Senate:

Likewise, Missouri congressman Roy Blunt avoids mentioning his current job, and instead stresses his previous roles as a teacher and president of Southwest Baptist University in Bolivar, Missouri. “Irresponsible spending and crippling debt are killing jobs today, and our children’s future tomorrow,” he says in the ad. Yet Blunt’s omission is even more glaring than Ellsworth’s. Blunt, after all, has full Washington resume: A House member since 1997, he’s former Majority Whip and Majority Leader, and right now he’s the second-highest GOPer on the House energy and commerce committee. Here it is:

Ellsworth and Blunt’s ads are notable for their complete omission of the two congressman’s jobs, but not at all surprising. Upwards of 70 percent of Americans disapprove of the job that Congress is doing. Another glaring example is Nevada gubernatorial candidate Rory Reid, son of Senate Majority Leader Harry Reid, whose campaign has done a stellar job of airbrushing out Rory’s ties to his largely unpopular father (at least outside Democratic circles.)

The lesson here is this: Any candidate who touts his Washington credentials on the campaign trail is committing political seppuku and sealing his or her own demise. Watch for plenty more ads like these in the weeks and months to come, as the wave of occupational amnesia spreads to more incumbents fighting for survival.