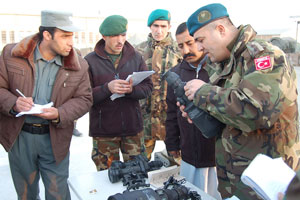 Reading through the trove of documents released by WikiLeaks Sunday, one could come away with the impression that members of Afghanistan’s discipline-challenged security forces spend more time fighting each other than they do the Taliban. Among the 92,000 documents released by the group are dozens of reports detailing so-called “green-on-green” incidents, the military’s term for friendly fire episodes involving Afghan personnel. Here the phrase “friendly fire” (what the US military dubs “blue-on-blue” when it involves American or coalition service members) is a bit misleading. While some reported green-on-greens involved accidental shootings—like when a trio of police officers were engaging in “horseplay” and shot an official from Afghanistan’s National Security Directorate and another man—many are the result of score-settling and disputes, occasionally drug-fueled, that turn violent. Many of these internecine conflicts pit members of the Afghan National Army (ANA) against the Afghan National Police (ANP). If even remotely representative of the professionalism of the ANA and ANP, these incident reports make Hamid Karzai’s goal of taking over primary control of security by 2014 seem like a pipe dream—and seriously call into question whether the Obama administration can deliver on its strategy. What follows are some lowlights (spelling mistakes, etc. in the originals):

In this episode last November US military personnel—who surely have more important things to do—were forced step in as peacemakers when an altercation between the ANA and ANP turned violent:

…ANA are trying to mass on the old bridge however we have elements on the ground… holding both ANP and ANA back.

But right now there is tension b/w ANA and ANP

You know what they say about drugs making you paranoid. Circa February 2008:

At 1747Z, TF Helmand reported 1x ANP was in the public shower smoking hash. 2 ANA walked in, the ANP felt threatened and a fire fight occurred. The ANP fled the scene and was later shot.

A military analyst reported that this incident, which he speculated might have occured because “tempers were likely high due to Ramadan fasting,”  would “significantly aid the insurgeny [SIC].”

Last night approx. 1745L, an ANP driving a Ranger smacked an ANA with the door in the bizaar.  The ANA was armed but not in uniform. The ANP driver was not in a uniform either.  The ANP and ANA argued, and the ANA shot 3 civilians.  All are recovering in the hospital in Mehtar Lam 1km outside the FOB. The ANA also shot the ANP Ranger. At least 7 bullet holes were confirmed.

This policeman, who eventually died of his wounds, was the victim of an ANA warning shot—to the head:

5 ANP in AO Zormat attempted to desert this morning and walked away from their post.  A group of ANA at the same post offered the ANP commander to go after his missing ANP to recover their weapons if they were quitting and try to persuade them to come back so that they would not be captured by ACM.  About 5 minutes later, the ANA came back with a wounded ANP (gunshot wound to head.) Their story is that they tried to fire a warning shot and accidentally hit the ANP PAX [person].

In this case, ANA personnel were apparently forced to take action against members of the police who murdered an innocent street vendor after trying to rob him:

ANP were seen approaching local vendors in Bazaar e Panjawayi, they tried to take/steal a propane cylinder from the vendor, the vendor got upset so the ANP murdered him, 1x KIA LN, the second LN tried to stop what was going on and the ANP injured him, 1x LN WIA, ANA viewed this action from across the street in Bazaar e Panjawai, once shooting occurred they returned fire at the ANP, soon after the ANA cuffed all ANP, ANA then searched ANP compound finding 107mm rockets, mines, 1:50000 maps and electronic equipment.

Another involving criminal activity by the ANP:

6X ANA RANGERS WERE DRIVING BY A CP IN ADRESKAN DISTRICT AND OBSERVED AN ANP CP POLICE OFFICER TAKING MONEY FROM A CIVILIAN TRUCK DRIVER.  ANA INVESTIGATED AND FOUND THE POLICE OFFICER WAS TAKING A BRIBE, SO THEY ATTACKED AND BEAT THE ANP OFFICER. A FIRE FIGHT ENSUED BETWEEN THE ANA AND ANP LASTING 15 MINUTES. THERE WERE TWO ANA WOUNDED AND EVACUATED TO HERAT HOSPITAL.

If the Afghan police arrive to settle a dispute, take cover:

Reports suggest that a dispute broke out between LN’s [local national’s] over land. AUP [Afghan Uniformed Police] were dispatched to settle the dispute. Due to tribal ties and family relationships to the LN’s involved in the dispute, AUP split and elements of AUP sided with different LN’s. The situation then escalated and a shooting broke out resulting in the 2 x AUP WIA [wounded in action] and 1 x AUP KIA [killed in action].

Picture the Three Stooges—except that two of them have AK-47s: