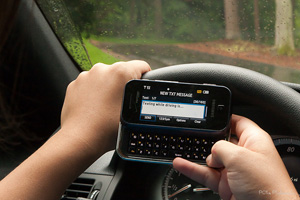 A version of this story first appeared on FairWarning.org.

As of last week, Washington lobbyists were looking to recruit automakers, insurers, and electronics manufacturers for a coalition to resist new safety restrictions on the use of mobile devices while driving. But their effort fizzled spectacularly yesterday, when Transportation Secretary Ray LaHood and a safety expert named as the coalition’s leading man denounced the effort at a DC press conference.

It all began with a 10-page proposal [PDF] put together by DC lobby shops Seward Square Group and Eris Group, along with a third firm, Praecere Public Relations.

“TIME IS OF THE ESSENCE” the memo blared in boldface. “With industries remaining silent, national transportation authorities and media celebrities have hijacked the debate….Auto, tech, and insurance industries, among others, have become collateral damage in this transportation battle. Failure to act will result in a scenario with 51 separate battles, instead of just one where a coalition can lead the debate….Even worse, stakeholders will get caught flat-footed by federal preemption and forced into a position against something, instead of being for something: enhanced driver education and enforcement.”

Obtained last week by FairWarning.org, this K Street version of Chicken Little proposed to counter the messages of Oprah Winfrey and Transportation Secretary Ray LaHood, who have been rallying against driving while talking, texting, or checking email on mobile devices—and for good reason. In 2008, according to federal estimates, 5,870 people were killed and 515,000 injured by distracted driving, though it’s uncertain how many of those incidents involved electronic devices. The National Safety Council has estimated that 28 percent of all vehicle crashes are attributable to cell-phone use.

While no state has entirely banned the use of cell phones on the road, 30 or so have adopted some restrictions. These include bans on texting and on use of cell phones by teens and school bus drivers. Seven states and DC require hands-free devices. Enforcement of the existing laws has been spotty, and other devices, such as portable and built-in GPS systems, are unregulated.

The proposed coalition, DRIVE (Drivers for Responsibility, Innovation and Vehicle Education), was conceived by the lobbyists to promote driver education as an alternative to regulations that could dampen demand for mobile devices, leading to billions of dollars in lost sales. According to their memo, DRIVE would shift the focus of the debate away from regulation and toward driver awareness by reaching out to lawmakers, regulators, and the public while “providing industry cover.”

In their proposal, the lobbyists breathlessly quote LaHood and Winfrey, and chart an explosion in news articles on the subject of distracted driving. “In less than 6 months, a benign debate about teens and texting has morphed into a full-throttle assault on mobile technology,” they warn. “With industries remaining silent, national transportation authorities and media celebrities have hijacked the debate, a dire consequence to reasonable regulation.”

The DRIVE coalition was to be headed, they wrote, by James E. Hall, who chaired the National Transportation Safety Board during most of the Clinton administration. Hall runs the DC consulting firm Hall & Associates and acts as an adviser to Seward Square Group.

A timeline was included: The first step was a recruitment effort targeting top marketers of cell phones and GPS devices, auto makers, wireless carriers, and insurance companies, including names like Motorola, Nokia, General Motors, Ford, AT&T, Microsoft and TomTom. A public launch and media campaign was planned for September—in time to influence public debate over the National Highway Bill, the memo notes.

The lobbyists portray DOT chief LaHood as the archenemy, his safety activism evidence of the need for urgent action. Indeed, the former Republican congressman from Illinois has been far more outspoken than his predecessors about the risks of distracted driving. In January, when LaHood announced a federal ban on text messaging by commercial truckers, he said it was his goal “to eliminate all mobile devices in vehicles…New technologies do not fit with my high standard of zero distractions in vehicles, period,” according to the memo.

The memo’s authors also cite LaHood’s April announcement of pilot programs in Syracuse and Hartford to crack down on distracted driving. “Similar pilot programs on drunk driving and seat belts ultimately became federal mandates, where government dictates behavior behind the wheel,” they caution.

Winfrey—who has urged guests on her TV show to sign a pledge not to yak behind the wheel—is described in the memo as “the most powerful person in media” with more than 3.7 million followers on Twitter and 1.5 million Facebook fans: “Her website has an entire ‘No Phone Zone’ on distracted driving,” describing it as “‘an epidemic that is sweeping through our country, claiming lives and destroying families.'”

Michelle McIntyre Sznewajs, a spokeswoman for Harpo Productions, the company that produces Oprah Winfrey’s daytime talk show, had little to say when told about the DRIVE proposal. “This is the first we’re hearing of this, and we have no further comment,” she said.

But at Wednesday’s press conference denouncing the effort, LaHood said he was “stunned.” Hall, also present, insisted that he had never cleared the DRIVE memo—which was circulated to recruit members—and that it did not represent his views. “Our nation is addicted to cell phones and our nation’s youth particularly is addicted to text messaging,” he noted, adding that he fully supports LaHood and stricter curbs on electronic distractions. Hall said his past discussions about DRIVE were limited to promoting “safety-improving technologies.” But he did not explain how the document got out without his approval.

It also isn’t clear whether any of the named companies signed on as members, but news of the memo caused an uproar. Safety advocates lambasted the plan. Citing progress on drunk driving and seat belt use, they said evidence shows that driver education only works when combined with tough enforcement. “The simple fact is that texting and talking behind the wheel is a deadly epidemic,” LaHood said yesterday. “We’re keeping the pedal to the metal in spite of a new effort to rile up the electronics industry and derail our coalition.”

Earlier, I’d spoken with Judith Stone, president of Advocates for Highway and Auto Safety, which is working to get state and federal laws passed. The goals of DRIVE “are completely contradictory to ours and other safety groups,” she said. “This is so clearly a negative effort, and we would like to see it die on the vine.”

Stone got her wish. Following the press conference, the Seward Square Group issued DRIVE’s eulogy: “Our collaborative effort simply sought to expand the discussion to include other common forms of driver distraction,” the firm said in a statement. “We are pleased that the concept has met its goal of expanding dialogue on distracted driving, therefore the proposed coalition is no longer being pursued.”

Also appearing at the press conference was Jennifer Smith, president of FocusDriven, an advocacy group for victims of cell phone crashes. She called the DRIVE proposal “appalling.” Despite widespread awareness of the dangers, she said, “I still get a new phone call every day or every week from a new family that has lost a loved one.”

Smith’s own mother was killed when her vehicle was hit by car whose driver was absorbed in conversation. “If education was enough,” she said, “these people wouldn’t still be on the phone.”