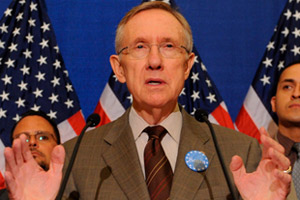 Senate Democrats plan to debate an energy package when they return from this week’s recess—one they hope will be a slam-dunk with voters, considering the outrage churning in the country after the Gulf disaster. But there’s still shockingly little in the way of specifics—including whether the package will include any climate change provisions at all.

Democrats emerged from a caucus meeting in late June flying high on the idea that a comprehensive package—one that sets new rules on the oil industry, incentivizes clean energy production, and possibly puts a price on carbon—would be a winner. And if Republicans blocked it, they reasoned, Democrats could use it as a bludgeon in the November elections.

“A number of senators said this was the best caucus they’ve ever attended,” said majority leader Harry Reid (D-Nev.). John Kerry (D-Mass.) described the meeting as “inspirational.” Joe Lieberman (I-Conn.) said it was “an uprising of rank-and-file members of the caucus.”

But that initial enthusiasm was short-lived. After a bipartisan group of senators met with President Obama, Republicans were still reticent about a cap on carbon, while Democrats said they had offered to scale back their plans yet again.

Now, just days before the July session resumes, no one seems to have any idea where things are headed. “Staff are preparing options for members to review next week but no decisions yet,” said Reid spokesman Jim Manley. “I don’t have a sense, and I’m not sure that anybody firmly has a sense, of what is being brought up and when,” said a Democratic aide.

Part of the problem is that a cap on carbon dioxide—the main point of an energy package back when Congress started talking about a “comprehensive strategy” more than a year ago—never quite got off the ground in the Senate. Now, there seems to be some hope that a cap might make it through as part of a bigger bill, especially with all the oil-spill related measures attached. Another possibility is a bill with a limited cap—there has been speculation, for example, that Sens. Jeff Bingaman (D-N.M.) and Olympia Snowe (R-Maine) might pair up to introduce a bill that would include a cap covering only power plants.

But Bingaman’s spokesman has downplayed the suggestion that he would have a utilities-only bill ready to go this year—he’s still fighting for his own standalone energy bill, which passed through the Energy and Natural Resources Committee last June. That bill has been criticized by environmental groups—not only does it provide lavish incentives to coal, oil, and nuclear power, it doesn’t even include a cap at all. In an appearance on CSPAN over the weekend, Bingaman said that he doesn’t think any sort of cap—written by him or by anyone else—has a chance of passing this year. “I could support such an approach, but I do think that when you look at the makeup of the Senate today, there are quite a few senators who I think are going to be resistant to anything that could be labeled as cap-and-trade,” said Bingaman on Sunday.

John Kerry, the Senate’s biggest champion of a comprehensive carbon cap, has indicated that he might be willing to work on some version of a scaled back bill, now that his own bill, introduced in May, seems to have sputtered out. Kerry “has been and continues to be committed to passing comprehensive legislation this year that puts a price on carbon,” said his spokesperson, Whitney Smith, but he is “open to several options currently in the Senate that will achieve that goal” and will work to “bring the best possible bill to the floor this summer.”

Environmentalists, meanwhile, are trying to salvage some manner of a cap, even if it’s not the sweeping bill they have worked for all this time. “We understand the reality is that a comprehensive, economy-wide cap-and-trade system is not going to be passed by the Senate,” said Fred Krupp, president of the Environmental Defense Fund. “We’re for the broadest cap we can get.”

They are less enthusiastic, however, about the Senate passing another energy bill without any cap at all. Environmental groups say Bingaman’s energy bill by itself would be a nonstarter, amounting to the “status quo… a band aid,” said Joe Mendelson, director of global warming policy at the National Wildlife Federation. Whether they would support a bill that capped only utilities depends on the specifics of the plan and how it would phase in other sectors over time, Mendelson said. A utility-only bill, said Michael Brune, executive director of the Sierra Club, “has to be very ambitious to go beyond business as usual.”

Environmental advocates, who have now watched a host of climate bills emerge and then quickly fade in the past year, are beginning to wonder why Obama isn’t stepping in to help. A group of nine major environmental and progressive groups sent a letter to Obama last week calling for him to take a more active role on the Senate bill, a sign that they’re growing impatient. “The president has to directly engage with his staff at a detailed level to produce a bill with carbon limits that can pass,” said Krupp.

Without some direction from Democratic leadership—most importantly, the guy over on Pennsylvania Avenue—the path ahead for energy and climate remains unclear. “Let’s be honest, we’re adrift,” said Brune. “There is no plan. There is no clear author or director or coordinator of a plan.”