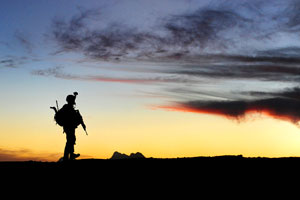 Afghanistan is truly an under-reported war—and, more important, an under-discussed and under-debated war. Last week, for instance, Andrew Breitbart must have received a thousand times the ink and hits that the war did, and even he might think that wasn’t right. This conflict is costing the nation about $100 billion a year, at a time when our federal budget is under great pressure. The loss of American lives in Afghanistan has been increasing. Civilian casualties have created resentment against US and NATO forces. The US military and civilian agencies are involved in a tremendously complicated endeavor in a land very few Americans know anything about, and US success depends on collaborating with Afghan political and security institutions that are often inept and plagued with corruption. Yet this war receives little air-time in the United States. There is the occasional hearing on Capitol Hill, but no rousing debates. The media and public pay attention in spurts—such as when President Barack Obama conducted a review that led to increasing the number of US troops in Afghanistan, or when Gen. Stanley McChyrstal and his staff dumped on the White House while talking to a Rolling Stone freelancer. Yet these short bursts come and go—while the war slogs on, with much of the United States remaining detached from and ignorant of what is happening day to day in their name, with their tax dollars, in Afghanistan.

So when Wikileaks posts 92,000 classified US military reports detailing assorted aspects of the war, it is disheartening to see bloggers and commentators dismiss this document dump as not much that’s new. In a post headlined “Underwhelmed by Wikileaks,” Tom Ricks writes,

A huge leak of U.S. reports and this  is all they get? I know of more stuff leaked at one good dinner on background.

The “this” he referred to was a New York Times story based on these documents that reported that that Americans fighting the war in Afghanistan have long suspected Pakistan’s intelligence service of secretly helping the Afghan insurgency. And Ricks cites a dismissive posting by Mother Jones’ Adam Weinstein: “I mean, when Mother Jones yawns,  that’s an indication that you might not have the Pentagon Papers on your hands.” The Center for New American Security’s Andrew Axum (a.k.a. Abu Muqawama) took a similarly sarcastic view, noting last night when the story broke: “I’m going to bed, but if I were to stay up late reading more, here is what I suspect I would discover: 1. Afghanistan has four syllables. 2. LeBron is going to the Heat…” Andrew Sullivan writes, “What do we really learn from the Wikileaks monster-doc-dump? I think the actual answer is: not much that we didn’t already know.” But Sullivan does concede that this material is “rivetingly explicit” and “confirmation of what anyone with eyes and ears could have told you for years.” The Economist blogged,”while this unvarnished heap of military intelligence adds a lot of colour to our understanding of the war in Afghanistan, the first headlines to have come streaming from the mess of it tell us little that we did not know already.”

I wonder if any of the journalists pooh-poohing this collection of documents would do so had he or she been the person to unearth this trove. Moreover, as the Times (which, along with British newspaper the Guardian and German magazine Der Speigel, was granted early access to this archive by Wikileaks), the records undercut the administration’s claims about the war. Its story on the documents opened:

A six-year archive of classified military documents made public on Sunday offers an unvarnished, ground-level picture of the war in Afghanistan that is in many respects more grim than the official portrayal.

Know-it-all cynics can be dismissive and claim, Well, it isn’t big news to me that the war is not going as well as depicted by the Obama administration (and, prior to that, the Bush administration). Yet when 92,000 military reports emerge supporting this point, it ought to be significant—even for the jaded.

In combing through the documents, the Times did find some notable news: the Taliban have used portable heat-seeking missiles against US and NATO aircraft (a fact the US military has not disclosed); the performance of drone aircraft in Afghanistan is less impressive than maintained by US officials; the CIA has run the Afghan spy service as a “virtual subsidiary.” Each of these stories would be page-one material. Yet perhaps because they have been lumped together in a Afghanistan-war-is-grim package, these revelations have less punch. They’ve been diluted.

How many of the fast-to-dismiss band have mined the 92,000 documents? Consider how the New Yorker‘s Amy Davidson approach this matter. In her review of the Afghanistan leak, she zeroes in on one report from last November detailing how one military unit had to pay several thousand dollars in bribe to a warlord suspected of protecting drug trafficking (a charge he has denied). As Davidson notes, “a leak informing us that our tax dollars may be being used as seed money for a protection racket associated with a narcotics-trafficking enterprise is a good leak to have.” She also notes:

each of the WikiLeaks documents—from an account of an armed showdown between the Afghan police and the Afghan Army, to a few lines about a local interdiction official taking seventy-five-dollar bribes, to a sad exchange about an aid scam involving orphans—is a pixel in a picture that does, indeed, contradict official accounts of the war, and rather drastically so.

These documents—snapshots from a far-away war–show the ground truth of Afghanistan. This is not what Americans receive from US officials. And with much establishment media unable (or unwilling) to apply resources to comprehensive coverage of the war, the public doesn’t see many snapshots like these. Any information that illuminates the realities of Afghanistan is valuable—especially if it shows (or reminds those already in the know) that government officials are overselling what’s happening in this insufficiently examined war.