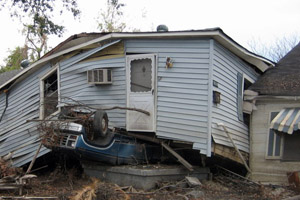 The New Orleans house I’m sitting in at the moment is finished with meticulous detail: cypress crown molding and trim, recycled loblolly-pine posts, Art Deco Oriental rugs. To my left, there’s a bathroom with wood wainscoting and a refinished 100-year-old claw-foot bathtub on a decorative-tile-lined platform. Almost exactly five years ago, all of this was submerged by toxic floodwaters. Its restoration was made possible by two years of sweat, occasional tears, and a Road Home grant from the Louisiana Recovery Authority.

Now a supplemental appropriations bill that passed the House earlier this month would take $400 million from post-Katrina recovery programs like Road Home in order to fund other projects, including $304 million for Deepwater Horizon-related remediation and investigation. To some Louisiana residents, using any taxpayer money, much less hurricane-relief money, to clean up BP’s oil just adds insult to injury. “Any provisions related to the spill should be paid for by the responsible party,” says Monika Gerhart, director of policy and government relations for the Equity and Inclusion Campaign, a nonpartisan advocacy organization. “We’re not yet recovered. So don’t take our housing money.”

For anyone who hasn’t been to New Orleans lately, here’s an update: It still needs so much work that visitors pay to take “disaster tours.” In a June 7 letter to the House Committee on Appropriations, Louisiana Recovery Authority Chairman David Voelker pleaded that the rescission of already-dedicated rebuilding funds be stricken from the bill. Without them, Voelker estimates, 19,000 homes statewide will go unrestored, nearly 7,000 of them in Orleans Parish. “If you just drive around, you can see the people need it,” says Taylor Henry, communications director for Republican Congressman Anh “Joseph” Cao, whose district includes New Orleans.

The appropriations bill does provide $5.1 billion to FEMA, which could theoretically pay for projects such as rebuilding New Orleans’ Charity Hospital or go to city schools that are still waiting for their disaster-relief funds. Or the money could go elsewhere. An executive summary from appropriations chairman Rep. David Obey (D-Wisc.) notes that the FEMA funds might go toward efforts to clean up after Hurricanes Katrina, Rita, Ike, and Gustav, as well as the Midwest floods of 2008 and California wildfires. “The way the money will be used will be up to FEMA’s discretion,” says House appropriations committee representative Ellis Brachman.

Rep. Cao, like every other member of Congress from Louisiana but one, voted nay on the appropriations bill. (Cao also has the distinction of basically telling the president of BP America that he should have to stab himself to death during a congressional hearing last month.) Democrat Charlie Melancon was the only rep who voted for it. Though he argued against the cutting the rebuilding funds, according to a statement on his website, he supports spending for other provisions in the bill, like funding the Afghanistan surge and assisting those impacted by the Deepwater Horizon disaster.

Rep. Melancon’s communications director says that he is “working with Sen. Landrieu, a member of the Senate Appropriations Committee, to remove the cuts from the final legislation so Louisiana can continue to rebuild homes damaged or destroyed by Hurricanes Katrina and Rita.” Likewise, Cao’s spokesman says that “We’re doing all we can to persuade our friends in the Senate not to pass this.”

If the Senate does approve the cuts, it could be bad news for a lot of New Orleans neighborhoods. Like the one I’m staying in. This house has been painstakingly restored. But both the houses I can see out my front door are abandoned.